Towards the end of 2007, when “Polokwane” was on everyone’s lips, South Africans – both inside and outside the ANC – found themselves presented with a choice: Mbeki or Zuma? The ways in which that apparent dichotomy has affected subsequent developments in local politics are manifold.But, judging by Crocodile Tears, artist Brett Murray is one of many who reject both these post-apartheid strongmen. Or, to put it another way, Murray suggests that (nuances of character and ideology notwithstanding) there is little fundamental difference between an SA under Mbeki and an SA under Zuma.This is made explicit by a triptych that greets visitors as they enter and exit the exhibition. Each of the three panels in “Change: Pre-Polokwane, Polokwane, Post-Polokwane” presents the same hedonistic scene; life’s a party if you have a senior position in the right party.

On the wall facing this work is Murray’s dedication to a “Most Gracious King and Sovereign Lord” who achieved “the prized victory at Polokwane”. This imitation of a centuries-old tradition of artists praising their patrons could be read as an unctuous, fawning tribute if it weren’t laced with sarcasm.Clearly, the object of satire here is the culture of deference that seems to be endemic in the ANC – with a glancing reference to the difficulties of raising financial support from government for arts projects that don’t ‘toe the party line’. Yet this is not specific to the personality cult surrounding Zuma; if anything, it was more evident in the cronyism that tainted the Mbeki era.Mbeki’s promotion of an “African Renaissance” and his celebration of diversity in the all-embracing “I am an African” speech receive short shrift from Murray. A noble concept is reduced to a marker of capitalist self-interest as a business sign on a wall (also the unofficial title of the handsome exhibition catalogue): “THE RENAISSANCE PTY (LTD)”.Indeed, this has become a pattern under BBE, BBBEE, GEAR, AsgiSA and other initiatives for economic development that have been unable to prevent greedy individuals from profiting enormously in the name of transformation. Accordingly, Murray’s “Eyesight to the Blind” is an optometrist’s chart which, if you read the (obvious) fineprint, equates U-BU-NTU with a dollar sign.

There is also, in the form of a clever allusion to the work of Belgian surrealist René Magritte, a critique of the rhetorical and intellectual flourishes that covered glaring practical errors during Mbeki’s presidency. Magritte famously placed the words “Ceci n’est pas une pipe” (“This is not a pipe”) below a painting of a pipe to emphasise that art merely provides images of objects – the objects themselves are elsewhere. Murray has reproduced the pipe but changed the wording to “Ceci n’est pas un president”: Mbeki’s pipe created the image of a philosopher-king, but that image in itself was not enough to make him a good president.
The “I am an African” speech is also dismissed by placing an image of Robert Mugabe alongside the words “I am an African too” – Mbeki’s stance on Zimbabwe, like his HIV/AIDS denialism, undermined whatever inspiration SA’s citizens might have taken from him.Murray’s frustration with both Mbeki and Zuma produces a scatological response. An ornate black-on-white pattern is dubbed “The President’s Arsehole in Renaissance Style”; here, Murray is the court jester, with licence to subvert the mighty using their own discourse. But a more bitter, personal response is expressed in “Umshini Wam”: “Every time/I hear you sing/the machine gun song”, the artist declares, “I want to find one/and shove it up/your fat arse.”

Like the king’s fool, however, he also lampoons himself and his background. A three-dimensional, glittering sentence reading “I HAM AN AFRICAN” is given the title “WASP (White Anglo-Saxon Protestant) Cry for a Place in the Sun”. What does it mean for white people to “ham” being an African – to act (badly); to pretend; to mock? Likewise, “The Old Identity Chestnut” lists those variations-on-a-theme so often heard from white South Africans: “I am/was/should be/demand to be/will never become/should not be/might be/will be” an African.This syntactic play is echoed in “The Battle of the Tenses”, which presents a series of emblems or insignia for different sectors of the population who are ‘battling it out’ for material success: the haves, the have-nots, the never-hads, the want-to-haves, the never-will-haves, and so on. Endless warfare over access to wealth is, really, the socio-economic reality that drives the exhibition’s biting satire. It is explicit in those pieces that depict the “crocodile tears” of the title – large steel figures, appropriately covered in ‘fool’s gold’, who are the picture of elegance and opulence even as they weep floods of tears.

Like many of the carved metal works, these metal pieces have silkscreen equivalents (this is a multimedia exhibition, also incorporating lithographs and digital prints) in the “Shame” series. The ironic label – to be rich in SA is often to be ‘shameless’ – also gestures towards that empty South Africanism, “Ag shame”; after all, it seems that neither nouveau riche black nor always-have-had white really cares about the poor in this country.“Crocodile tears” can also be associated with false contrition: apologies for corruption, for abuse of office, for incitements to violence flow thick and fast through SA’s media, but do they really carry any meaning?The anthropomorphism implicit in attributing ‘human’ motives such as deceit to an animal like a crocodile also complements Murray’s penchant for exposing the folly of people by depicting them as animal cartoons or caricatures: one poodle mounting another in “Power and Patronage”, or the idiot-king “Nagapie in the Headlights”.

There is a curious sense of anachronism in the exhibition. Murray invokes “the Renaissance” to point out the failure of Mbeki’s vision – SA in the twenty-first century, like Renaissance Europe, has a social spectrum ranging from wealthy dandies to the neglected masses – and there are, indeed, versions of Renaissance paintings on display. For instance, “100%”, presumably an allusion to T-shirts proclaiming “100% JZ”, adapts Raphael’s “Adoring the Golden Calf” to criticise SA’s idol worship.Many of the works, however, are reminiscent of a later, Baroque European period in which rococo aesthetic excesses matched extravagant lifestyles. In this context, Murray’s reformulation of Mary Antoinette’s “Let them eat cake” into “Let them eat pap” implies that post-apartheid SA is all-too-similar to France before 1789.

In “Conundrum”, Murray presents the dilemma facing SA’s disenfranchised: “To own or to storm the Bastille?”But, if the former is an option available only to a fortunate few, does that mean we are heading for another revolution? 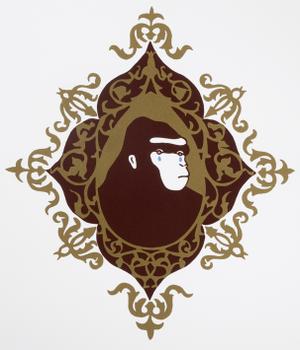 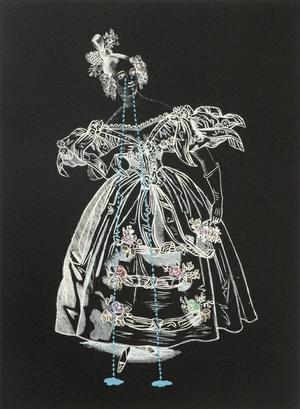