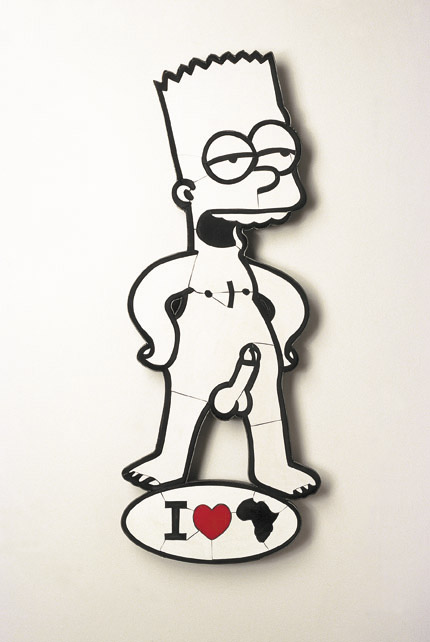 In much of West and Central African Sculpture the male erection, in the same way as the motif of bulging eye sockets, is associated with heightened states of consciousness, possession and passage between this world and the conditioning realities of the spirit world.

I don’t think Brett Murray’s image of Bart Simpson with boner should be emphasized too much, or at least not too solemnly. Murray’s art is too humourous, too irreverent, too much in your face for that: only the most hopelessly and irredeemably academic would be insensitive to the liberation in the low humour running as a discomforting leitmotif throughout Murray’s work. Murray himself put it very nicely, talking about seeking through the humour in his work, not so much as to amuse as to hit the funny bone. It’s not funny , it hurts, when you hit the funny bone.

It is a kind of spasm, whose semantic counterpart Murray finds in almost-but only almost- bland and disingenuous quotations of received imagery, format and style. It all works on the device off affront, a deliberate and very inappropriateness of the shock generated thereby- in fact precisely the kind of discomfort that Freud was wanting to define in his understanding of laughter. In the disjunctions that are generated-the parody of South African patterns of acculturation in the rendering of black dudes in sociological transition as refracted through the eyes of the Simpsons: the unmistakably sexual implication that Murray reads into the platitudinous ”I love Africa” when it is being said by a figure with an erect penis and a certain look in his eye: the earnest exchange between Western and traditional culture represented as postcard dialogue between an explorer and a cannibal-with the caricature cook considering spicing options in the background.

Of course it is partly about the aesthetics of shock. But it is not only that. There is also a kind of recognition or transfiguration that is affected in the semantic spasm. In an almost visceral aversion that Murray’s upended and discomposed narrative scraps and stereotypes provoke, we physically experience the deconstruction , the overbright illumination, of the vanities and utilities in the way we make up our world.

We are frozen between discourses, between the worlds, almost possessed by recognition.