While the photograph in Brett Murray’s invitation for White Boy Sings The Blues may have been taken over two decades ago, it is somehow more timely today than ever.In it the young (white) artist has covered his entire body with a black pigment as an attempt to transform his identity into that of an African warrior. The playful naivety that the image was originally constructed with is now eclipsed by the political climate of post-apartheid society.

White Americans caught in an extremely complex and contradictory state where their historical cultural beliefs are no longer considered legitimate, as a result of the Eurocentric prejudices that they were built upon. Young white artists are the most disenfranchised, caught as they are, between producing objects that continue to subscribe to Eurocentric prejudices, while living in a country that is becoming increasingly prejudiced against anything foreign, and in particular against anything European.

For many the solution has become to project an idea of the world through the eyes of black African subjects. This is in part a cathartic legitimization of the artists existence in Africa where the indigenous subject becomes the object of the artist’s fantasy.Murray is on the other hand one of only a handful of artists who speak through ethnic subjects, rather than on their behalf.

More than anything else White Boy Sings The Blues communicates the latent desire so many white artists to be black themselves, a desire born out of white guilt. Not only does Murray “Africanise“ his own features but also that of popular icons like Richie Rich and Colonel Sanders. These particular pieces echo Minette Vari’s postcards and newspaper clippings where she has superimposed her own features onto that of black subjects.

White Boy Sings The Blues is an extremely seductive exhibition, perfectly tailored for the local market. While the subject of each work is drawn from the painful moments in the legacy of Apartheid, the actual articulation is in the form of beautifully crafted Perspex and plastic veneers. The confrontational nature of Murray’s earlier work now gives way to a passive almost kitsch play between the subject and the object.Both politics and history are reduced to shadows or caricatures that function more as generic signs than referring to the specific histories they quote.

Issues of pressing political importance are alluded to without at the same time elaborating on the underlying, ideological and philosophical debates they are informed by. This makes the work popular through a non-confrontational accessibility.Murray is at his weakest when he slips into moralizing didacticism. Most of the works on display fall pray to tacky and literal puns as titles. In Ownership for instance the Joshua Doore logo supports bottles of copper coins. Similarly the title Land, which frequently accompanies a bottle of earth, becomes an unnecessary and obvious tautology repeating exactly the same information already extant in the work itself.

In a city that all too often loses itself to fashionable bandwagons White Boy Sings the Blues is refreshing in it’s simplicity, engaging in its beauty. Without solving the entire country’s problems, it attempts to find an individual expression for the schizophrenic existence of young white liberals who are now singing the post-apartheid blues. 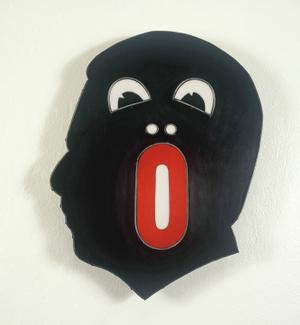