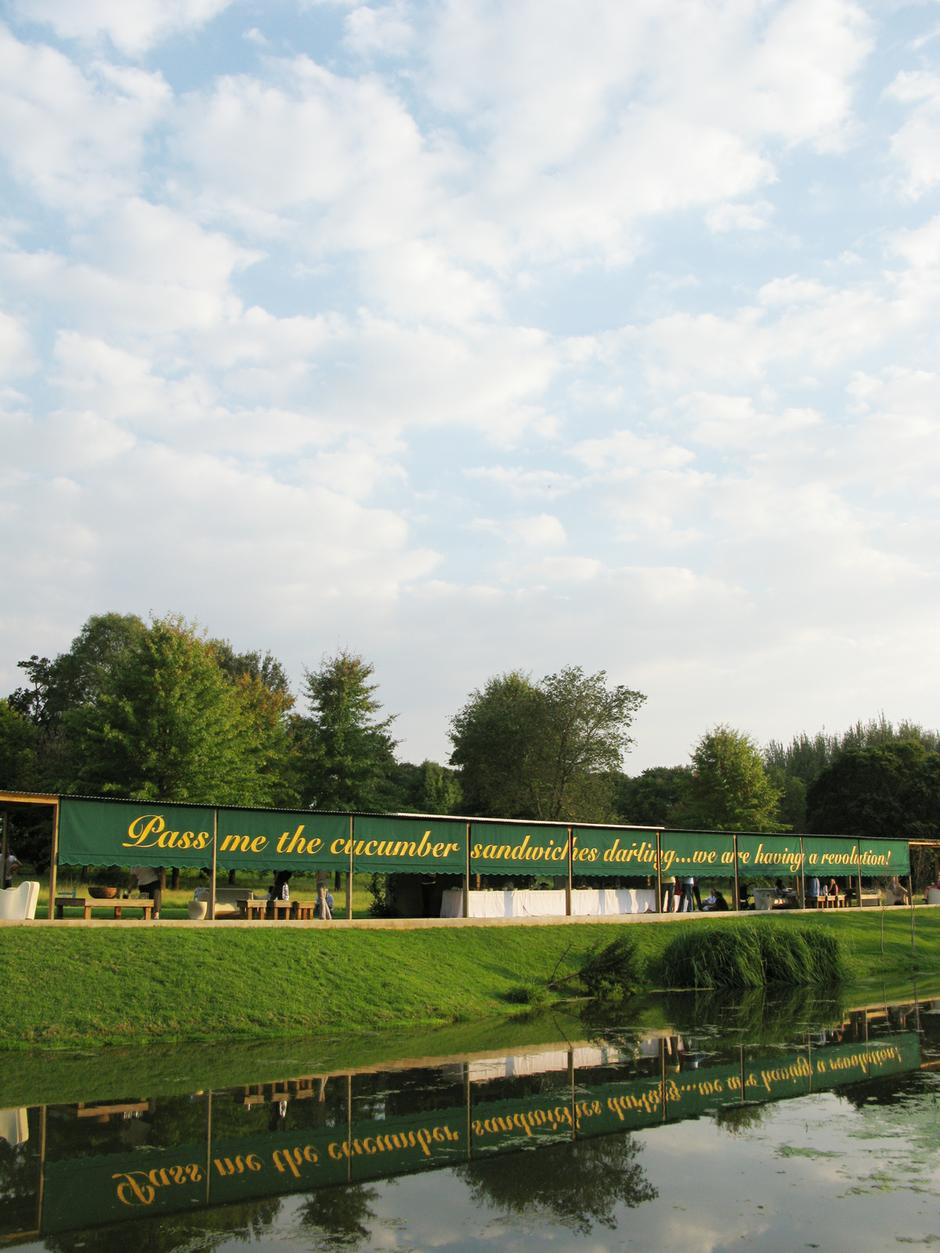 Brett Murray: I ‘ll be including two works at Nirox: one is a single bronze donkey, and the other is a text piece.
The donkey forms part of a group of ongoing sculptures of animals that poke fun at the dispensation, and was made for a show called Sleep Sleep, which looked specifically at violence and war. Those animals were weirdly mythical, slightly menacing, kind of innocent – the weird disjuncture between things where you are not sure what you are looking at.

The other piece is a text piece. When I visited Nirox for the first time, I just saw this beautiful Arcadian landscape, fantastically manicured – a kind of island within Gauteng, South Africa, Africa, the World – this beautiful Arcadian, pastoral, lush, rich context. And I thought I wanted to look at that, in a humorous way – which is my bent, I suppose, my default setting.

In terms of time constraints, I was looking at coming up with something which could be managed in quite a short period of time. I saw a structure which I thought I might use to hold a text piece, and ideas began floating around that. I was reminded of the eighties, and the dichotomy [in South Africa] between the ‘haves’ and the ‘have nots’, between white and the black – those kinds of disjunctures. And we always used to say, to remind ourselves, “Pass me the cucumber sandwiches darling … we are having a revolution” – like these white voyeurs with binoculars looking at what is happening out there. It was engaging the oddness of being removed from what is actually happening, and your existence within it as someone of privilege, I suppose. While driving towards this Arcadian landscape [at Nirox], you notice a squatter camp you pass, and it is the context of South Africa. And this work is an opportunity to look at that – but it is also difficult, because you do not want to piss on someone’s parade. And that obviously is not the intention. But it is what it is, to ground you. Hopefully one day I will not have to do that – I think I would love to just do something in the landscape and just engage with it formally or on an abstract level. But as I say, my default button is set to do something else with it. But the motivation is a bit broader than that. It is about using the context to look broadly at where we are living.

Tracy Murinik: And that broader context then includes the context of the heritage site that is the Cradle of Humankind – an area that has recently been massively invested in; that inspires idyllic and optimistic notions of what the “cradle of humankind” could mean – but which still features examples of the extreme poverty that you’ve described.

Brett Murray: Yes, it is kind of a Utopia and a dystopia.

Tracy Murinik: How much thought have you needed to give to the area itself, while conceptualising the work?

Brett Murray: I am aware of all of those other sites and I have been there, but I did not consciously reference or think to reference that. It was pretty basic. Sometimes my works are easy to talk about – there are one-liners, which do not need to be articulated and unbundled or unpackaged. It is a bit like a comic, starting with a punch line and working to the beginning of the story.

I think this is an instance where it is a bit like that. I continue to use text in my smaller works and sometimes in bigger works like this. Sometimes you get a layered reading of it, and sometimes it is something which is not as layered, it is more obvious – not pithy and not necessarily profound. It just depends on how you articulate it formally and how it sits in the context. But I often find it difficult to try and unpack my work, because my instinct is to want to meet the audience or the viewer more than halfway. And that is not necessarily being populist or dumbing down what you are doing, it is about articulating an idea and presenting it.

It is also not politically driven in that I want to change things necessarily. My intention is to shift people’s ideas and to do that formally as well as conceptually. But then you have to give an audience enough information to realise where you are going.

Tracy Murinik: What will the structure will look like?

Brett Murray: There is a structure like a walkway, onto which I’ll be hanging a deli-type awning – those green deli canopies with the scalloped edges. There will be nine of them, so it is quite long, and with huge text, declaring, “Pass me the cucumber sandwiches darling … we are having a revolution”! As simple as that.