In Sleep Sleep Brett Murray tackles Goya’s themes of the sleep of reason and triumph of evil, ignorance, prejudice and superstition, transposing them into the context of the global resurgence of racism, chauvinism and terrorism orchestrated by Washington, its allies and adversaries. Sculpture, photography, painting, prints and plastic cut-out drawings deck the gallery out as a pseudo temple – or memorial – ironically dedicated to the gospel according to Saint George and the cult of militarism, materialism, fundamentalism, jingoism and conformity he sponsors.

Massive bludgeoning text-works, reminiscent of the Mosaic tablets of the law, serve as a catechism propagating the faith. Presented in gilded lettering and thus elevated into holy writ, ringing presidential injunctions like “Our religion must win!” act as battle cries, whipping up gung-ho triumphalist fervour. These mock scriptural citations conduct us to the high altar where brazen effigies of a gorilla, a donkey, and a pig, form a trinity of idols in the tradition of the golden calf.
Like the nightmarish bats, cats and owls that whirr forth in Goya’s The Sleep of Reason produces Monsters, these monsters issue from some dark substratum of consciousness and represent regressive psychic forces such as greed, covetousness, idiocy and rampant brute force.

Sleep becomes a metaphor for moral paralysis and the atrophy of conscience in the plastic cut out drawings arranged around the sculpture in triptychs. These portray a vast congregation of dozing worshippers, stupefied by propaganda, resolutely closing their eyes to the iniquities perpetrated by the imperium.
This templar concept dictates that the art-works form a progression, like the Stations of the Cross. The bronze effigies of zoomorphic gods bring the circuit to a dramatic climax, and ensure the whole adds up to far more than the sum of its parts. Inspired by toys, comics and cartoons, the sculptures have been simplified and abstracted into a few smooth, sheer, rounded volumes that achieve an iconic Brancusian economy rather than a flip Koonsian inconsequence.Frozen poses of a strictly frontal, balanced and symmetric type immobilise these false gods, and their strength and ferocity is undermined by the manner in which their comic book origins peep through, domesticating them and hinting at feet of clay. Their stance – with paws concealed behind their backs – points to shiftiness and deceit.

The bronzes are the most aesthetically satisfying component of Sleep Sleep. The style of the other exhibits reflects the hollow mendacity of the Yankee pledge to safeguard freedom and democracy, by wedding amplified scale to an aesthetic of gloss and expressive nullity. The panels portraying sleeping electorates impress through their monumental dimensions and gleaming, pristine surfaces, but the line drawing, like street signage, is deliberately featureless and void of emotive resonance. Murray appears to be parodying the hyperinflation and bombast that typifies presidential oratory. His execution is so big, broad and bold as to achieve numbing blandness.Paradoxically this very blankness serves as cogent satiric comment upon the empty and inhuman values of our jittery, paranoiac post-9/11 world which interprets reality in dangerously simplistic political and moral terms.

The wall-piece, Blood is the Opiate of Power, juxtaposes flat heraldic crowns with stylised drops of blood in order to explore imperialist aggression, propaganda and the insouciant sacrifice of human life. The sleek lustrous scarlet and gold crowns create a momentary illusion of wealth, power and legitimacy that soon reveals itself as outright imposture. The benign symbolism of the crowns is appropriated from a defunct royal political system, and these dynastic regalia are fraudulently applied to the nuclear force de frappe of America and other contemporary states. Gold and gemstones, simulated in patently cheap, ersatz materials, reek of spuriousness, and thus function as eloquent symbols of the hollow, duplicitous rhetoric emanating from the Capitol, the White House and many other seats of power. 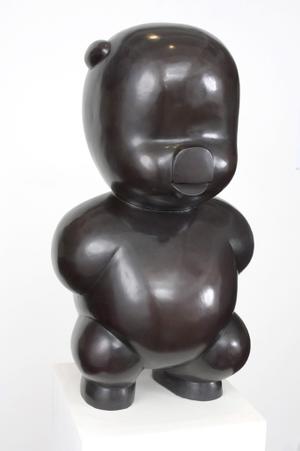