HAIL TO THE THIEF

One gets the impression that Brett Murray would really rather be on the streets graffiting than making art for comfortable galleries. But there he was dutifully giving a walkabout for his latest exhibition, Hail to the Thief, at the Goodman Gallery. Then again, Murray reckons he is too old for the streets. It’s the lure of the immediate and the reaching of large audiences that does it for him. He speaks almost wistfully of cartoonist Zapiro’s massive audience appeal. The title, Hail to the Thief, was inspired by a piece of viral marketing Murray spotted on a street in New York that fitted perfectly with his comment on our kleptocracy (or a rule by thieves).

The exhibition is a comment on corruption among the star-studded firmament of our current leaders. By invoking Soviet kitsch, bling and memorabilia it provides a chic, sharp criticism of the powers that be, all stylistically colour-coded in revolutionary red and black, with lots and lots of gold. There’s a massive Soviet insignia centred with a dollar sign, a poster of the ANC’s logo with a For Sale sign across it and one of the dapper walking figure synonymous with Johnny Walker whisky, with the words “forward comrades” instead of “walk on”. And so on.

We laugh at Murray’s cleverness, the way he hits the nail on the head. But it’s a bit too close to the bone. And underneath the laughter we sense Murray’s anger and the pain of seeing the failure of a society that you had hopes for. Right from the start Murray does not shy away from acknowledging who he is in the scheme of things. He is sees himself “right on top of the shit pile”. He agrees with Breyten Breytenbach’s criticism of the ANC that the playing fields have not been evened out. Things have been renamed and colours have changed, that’s all. There is a sense of Murray’s anger and impotence, too.

At least back in the 1980s, in his poster-making days, there was sense that there was a struggle towards something. The ANC, as far as Murray is concerned, is “pissing on the graves of the heroes” of the struggle and not living up to its ideals. “They pretend to be what they are not,” he says. This underpins the exhibition. Take the mutated protest poster that reads “Amandla” and below, instead of the original demands, it reads: “We demand Chivas and BMWs and bribes.” Murray is on a roll. President Jacob Zuma’s Achilles heel is not his heel, he says, “it’s his dick”. Followed by “he has good ball sense, but he dribbles too much”. 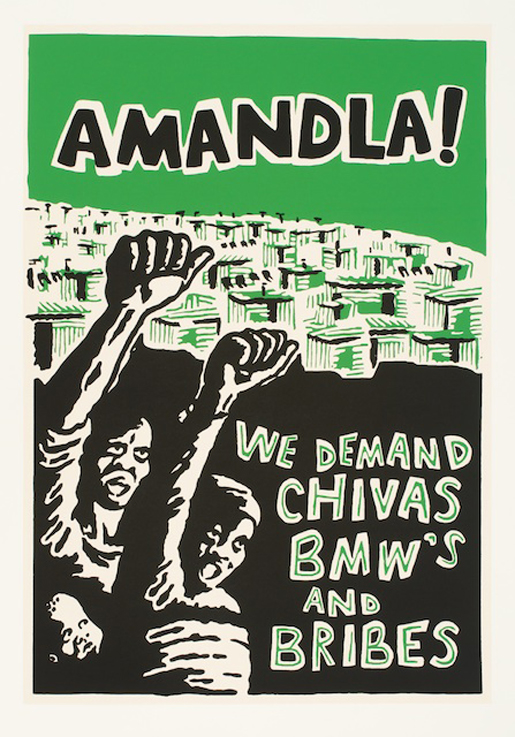 The artist enjoys the formal aspect of his craft, and he does it masterfully. For him the process of production is therapeutic. It’s here that he relaxes. Murray’s concerns may be the same, but the way in which he conceptualises them is always refreshingly new. His power lies in the marriage of images and words. He grapples with the contradictions implicit in his work – his own self-censorship, for example, and the fact that even if he wanted to paint landscapes, his own default position is social commentary.

There is a bronze sculpture of a thickset, low-browed primate who is broodingly and single-mindedly involved in onanism. The ape is familiar. In the late 1980s it was called Voortrekker. In Hail to the Thief, it’s the same beast, with a different title, One Party State, but the same concerns. We get its pointed socio-politico thrust and the ramifications of calling someone an “aap” in this climate.

We are a thin-skinned, but brutal society. You can’t say this and get away with it, but you can do worse and get way with it. You couldn’t say anything or do anything under the previous regime either. Murray’s approach is pertinent to a specific climate and people. The author of The Philosopher and the Wolf, Mark Rowlands, has a wider, even scarier implication for the inner ape in the man versus the wolf within. Rowlands writes: “The ape does not see its fellow apes; it watches them. And all the while it waits for the opportunity to take advantage… In the end, the ape will always fail”. Hail to the wolf. Go see.