It’s a rare occasion but, every so often, an artist or cultural producer creates a product that taps into the prevailing Zeitgeist with such accuracy – unearthing the underbelly of present-day conditions with such precision – that it makes one’s skin tingle and crawl. Recently, a number of artists have sought to represent the current sociopolitical conditions in the country but this exhibition is remarkable in that Murray’s expression is so succinct.

He employs the shorthand of the political cartoonist, but he is more inventive, drawing from a broader lexicon, which stretches back into art’s canon, and eventually establishing iconography of his own making. That is not to say that his art is coded and requires an astute observer to unravel his statements.Murray’s expression is unambiguous, confrontational and vitriolic. If Pieter-Dirk Uys or Mike van Graan were visual artists, this is the kind of art they would be making – a sharp brand that cuts through duplicitous political posturing like a hot knife through butter.

It is political satire translated into imagery. And, as is the case with this genre of expression, there is a crudeness to it, although it is not crude in its execution – Murray’s art is the embodiment of technically and ideologically polished expression. It is crude in that Murray doesn’t shy away from ugly truths.The debased actions and greedy materialism of the new political and social elite are expressed through works dripping with faux gold and the reoccurring motif of copulating dogs.

He presents a sort of hyper-reality in which the moral character of the ruling party (or the whites who remain powerful) are presented in a concentrated form – Murray doesn’t rely on hyperbole.Some of his work probably appears offensive, but the humour he employs destabilises the sincerity of his accusations. Besides, the conditions that Murray represents are unpalatable and depraved – the democratic era has ushered in another form of corrupt governance.Copulation proves a succinct metaphor for this state of affairs. It is not depicted as an erotic act but as a frantic animalistic act that is driven by base impulses. Showing it taking place between dogs – well-coiffed poodles at that – also underpins the act as one enacted in the public realm. The copulating dogs motif, therefore, comes to represent a range of illicit political shenanigans. It also subtly references white ascendancy. In a tongue-in-cheek declaration engraved on a shiny gold plaque, Murray dedicates his exhibition to the victors of Polokwane but, like the irreverent court jester, his art serves to reveal the duplicitous nature of his “patron”.

It is not an imbalance of power that Murray addresses – as has been customary with art in the post-apartheid era. His focus is the flagrant misuse of influence.This is personified by his references to Marie Antoinette and Louis XIV, the French royals who lived a life of excess while nonchalantly neglecting their impoverished subjects. Let Them Eat Pap (2008) cements this analogy between the French aristocracy and the ruling party. It is the motif of a supposedly remorseful Marie Antoinette pictured shedding tears that embodies a false parade of repentance. The ruling party’s repeated apologies for corruption and inefficiency, the remorse of the old apartheid fiends such as Adrian Vlok and exploitative white madams all come to mind. The tears that flow from Marie Antoinette are stylised, thus inferring premeditation.

Murray translates this motif into lithographs and steel sculptures, or should one say, frames, because that is what his sculptures are – one-dimensional skeletons of human effigies. In this way, he not only shows the Marie Antoinette persona to be vacuous but all the gestures of remorse to be empty. Showing remorse for past misdeeds has become a staple part of South African culture. Murray proposes that its ubiquity has divested the sentiment of any import. The Antoinette effigy could represent either the current ruling power or the previous white authority, forging a connection between the past and the present and a link in leadership style.

It’s a bitter pill to swallow – lessons in corrupt governance have been passed on to a new generation of leaders. A stainless steel phrase that reads “To own or storm the Bastille?” articulates this connection between the old and the new order. Similarly, the ironically titled Change: Pre-Polokwane,Polokwane, Post-Polokwane (2008), which features three identical 18thcentury paintings of a group of inebriated men feasting, defies the notion that transformation is automatic.
Absolute power corrupts absolutely is the maxim that Murray embraces.

Most of Murray’s work appears to be droll one-liners offering naive perspectives, but that is the point of his art – he is concerned with surface appearances.He is fascinated by mediated realities – the world of façades and images, signs and symbols that the mass media purveys. After all, for most, the realm of politics is a remote and mediated actuality, an imagined sphere. 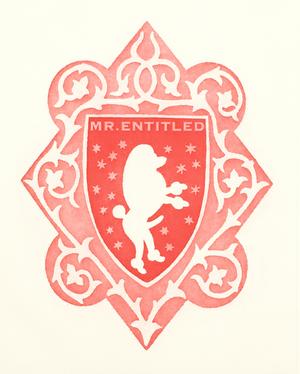 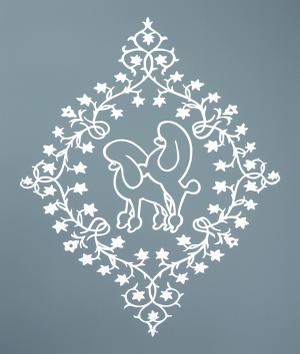 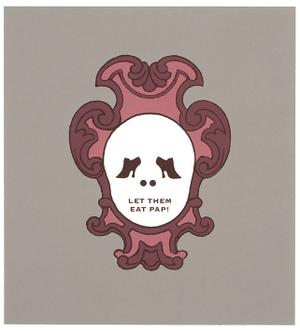