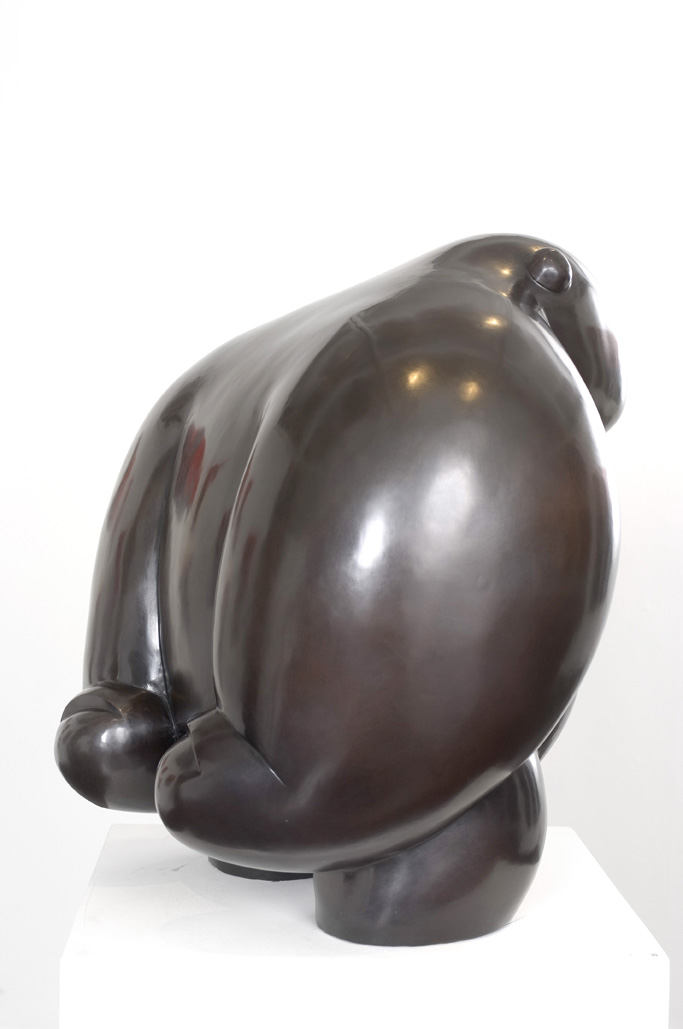 Brett Murray’s May show at the Goodman Gallery cements his position as SA’s foremost satirist working in visual art. It seems that Murray is the one of the few SA artists to fully grasp Italian writer and theorist Umberto Eco’s insight, ‘Perhaps the mission of those who love mankind is to make people laugh at the truth, to make truth laugh, because the only truth lies in learning to free ourselves from insane passion for the truth’. Called ‘Sleep Sleep’, Murray’s show is challenging because it asks just how hard we should laugh at the frequently awful truths that make up African and international politics. Yet for the individual faced with a monolithic spin industry calculated (as Chomsky would have it) to manufacture consent, the entry point to subversion often lies in pointing out the ridiculous deeply embedded in the rhetoric of power.

Though Murray himself points out that text is less dominant in this show than previously in his output, it is the text-based ‘one-liners’ that first catch your eye. One work declares, in bold, golden 3-D letters, ‘Our Religion Must Win’. While undoubtedly referencing the sort of Southern States yank zealotry that gave impetus to the ‘war on terror’, the dramatic spotlighting of this work lends it an uncanny resemblance to the Voortrekker Monument’s ‘Ons Vir Jou Suid Afrika’ epitaph. On another wall, the ‘What Would Jesus Do?’ phrase from bumper stickers and lanyards is perverted into a more relevant and more telling ‘What Would Oprah Say?’. Looking across to the Zen Portraits of My Favourite Politicians’ Arseholes(2005/06), I wondered what, indeed, Oprah would say.

Sculpture has always been the mainstay of Murray’s output. Even his wall-based joke works, and the cut-outs made in collaboration with Conrad Botes, were essentially sculptural. This show is something of a departure, as it sees Murray experimenting with all manner of visual forms, from inkjet prints and black-and-white photographs to paintings. Numerous works on the show employ a new technique that marries rudimentary block printing with painting. Yet his caustic wit and sniper’s eye serve to unify the body of work and ensure that it retains focus.The most overtly sculptural works on exhibition, Little Pig, Donkey and Gorilla (all 2005/06) anchor the show and serve as reference points for much of the wall-based work. These bulbous, patinated black bronzes are hybrid figures, somewhere between human and animal, and are at once comic and threatening, like edgy castoffs from a Pixar storyboard. The pig is frankly cute, its ineffectual little arms thrust backwards as if it were about to dive into something. Yet in the context of this show its association with Orwell’s Animal Farm is inescapable. The gorilla is altogether more menacing, yet at just over 60cm high, comically so. Its stylised features make it resemble something Brancusi would have produced had he moonlighted for Dreamworks. What becomes interesting is the way the curation of the show creates interactions between these sculptures and the 2-D works. Gorilla is positioned gazing at a trio of identical canvases bearing the image of a 50’s-style movie monster, red eyes ablaze. These are titled ‘Theyíre Here!’(2005/06), and while deliberately trashy, go right to the heart of the post-apartheid, post-9/11 paranoia that now passes for normality.

Elsewhere, Murray makes use of familiar visual conventions to undermine African narratives of religious zeal and their accompanying violence. Digital prints of sappy watercolour works (found images reworked with text), with titles like Amen, Bless Us and Dear Lord, make a joke of the style and imagery favoured by Church repository artists. Yet the intent is serious: the connection between organised religion and military aggression in Central and North African countries is clearly the topic. Rather than banal (as has often been the vogue in contemporary art recently), evil is shown as insidiously aestheticised, disguised as easily digestible scenes of ‘sacred’ familial interaction. The text on these works, however, is grave, alluding to rape, genocide and xenophobia.

The stylistic shift in this show is not the only one. Significantly, Murray speaks about ‘allowing myself to not be funny’, as if he is aware that an exclusive mode of hailing the audience through pop iconography and one-liners, while effective as the cornerstone of a populist programme, can ultimately prove limiting. Series like Sleep Sleep and Lullaby suggest a far more intuitive exploration of ideas, and are decidedly unfunny. Consisting of heads in attitudes of sleep or rest rendered in elegantly economic line, the works ask, ‘Are these heads of the dead? Or just asleep? Are they guilty? Innocent?’. The details of the narratives from which these images are culled are not shown, only the heads isolated on fields of beige, heightening their ambiguity. Murray calls them a ‘tragic antidote to the one-liners’ in other parts of the show. It is as if the complexity of post-liberation violence and paranoia sometimes warrants a more nuanced approach. While hardly navel-gazing, the interpretive latitude these works afford the viewer subtly balances the directness of much of the other work.

In a 2004 essay in Artforum (November edition), writer David Robbins defined comedy as ‘our flexible strategy for scraping from our lives the thin film of shit produced by human society’. While Murray’s strategy has begun to resist simplistic definition as ‘comic’, there remains a sense that he is still interested in scraping away layers of shit to make clear that which we would often prefer remained opaque. As long as the 7 o’clock News continues to be, in Murray’s words, ‘the magnificent soap opera’ that it is, we will need artists like him to highlight the greed and stupidity of those in power. A second work with the phrase ‘Our Religion Must Win!’, this time in spindly cursive and repeated seven times like a dogmatic mantra, is an open series, with Murray reserving the right to produce more at any time. Like he knows there will always be a need for incisive satire.