I think in the construction of Wayne Barker’s catalogue recently published by SMAC Gallery, the decision to present him as a “personality” who makes art is a disservice to his art making. It is an easy mistake to make as it presents, in catalogue form, the colourful enigmatic cliché of artist as enfant terrible…the Romantic notion of the delinquent creative struggling with life’s hard questions… seeking solace in the bottle late into the night, fighting his and our demons. The perpetuation of these myths of the tortured creative soul should be laid to rest. This is fine material for cheesy novels but ultimately unhelpful in the context of his catalogue as it clouds a more precise reading of his work, his intentions and his craft.

When thinking about Barend’s work, my initial impulse is to heed this warning…and steer clear of the personal, the character, and the flamboyant and ever present presence of Barend in his work and in our lives. I find this difficult. His work and the packaging of himself and his collections of things as artworks necessitate an integrated reading. His art school quip that “Art is what you make it” resonates. This neat, if not innocent, presentation of “All that I am and all that I do is Art” underscores much of his practice. As a result you have to start looking beyond the more formal displays of his craft and begin to amalgamate this with an examination of other aspects of his life. His collections of clothes, yo-yos, hats, fishing paraphernalia and other things that are out of sight need to be perused. You need to look at the particularity in the design of his rooms, houses and studios. His spatial architecture, as it were… and his pens and his knives and his tattoos as well. His friends and associates must also be seen as part of this collection.

When thinking about his work I consistently go back to the object. Whether it is this personal collection of things or his manufacturing and crafting of new objects. By specific choices he shines a light on the uncomplicated things around us, things overlooked. These choices are made with an eye for simplicity, design and popular history and driven by an idea that in choosing them (or making them) he imbues each with a coolness and profundity. They are presented as extensions of himself. A world is created which reflects himself in all his stylish wonder. He is a playful narcissist where all roads lead to Rome. All of which communicates an incredible self-belief, a confidence that is evident in all that he does. What usually inverts this indulgence and manifests in cathartic release is the often self-effacing humour that runs just below the surface of almost all of what he does. A facetious, if not arrogant exuberance is always evident. Tongue-in-cheek… if it’s not in your ear. This is Planet Barend.

So to remove the personality from the artwork, in this instance, is difficult. More so as all these investigatory prompts are implicit in the artworks themselves. His distrust for “academic readings” of his works, which exist in a world where “What you see is what you get”, should be recognised. The objects and performances themselves spark possible conceptual narratives but almost always refer back to themselves. Whether he presents them as Art with a capital A or as knitted caps or as a display of yo-yo tricks or as tattoo artists drawings there is always a clear, precise and unyielding consistency binding all of his practice. A playful Zen like approach to his creative decisions might appear obvious in the development of his personal lexicon. Obvious, not in its pejorative sense but rather in the sense that this describes the simple and profound effortlessness of his conceptual and formal constructs and the clear linear extension of a formal language and of personal iconographies, obviously.

“Its not who does it first but who does it best!” is another Barend art-school truism so it won’t hurt to mention some artists who might help inform us of precedence, both stylish and conceptual, and could bracket some of his practices. Erwin Wurm and his odd photographs of absurd performances spring to mind, as do his sculptures. Piero Manzoni’s ironic conceptual art is a helpful guide. Clause Oldenberg’s monumental celebration of the banal would need a nod. Alexander Calder’s sculptures and his home spun tools and jewellery might have some resonance. Miro’s formal language and lyrical lightness might be evident in some of the early metal work and his later bronze and plaster-of-Paris collages. Fichli and Weiss’s haphazard balancing acts are apt in this context as well. Always present in Barend’s work are low-art references and celebrations. Knitting, embroidery, glass drawing, tattooing, and yo-yo tricks are all assembled in a sophisticated yet simple flower arrangement of things and performances. An urbane lampooning of the seriousness of high art is constructed with intelligence and humour which revels in the mundane.

If Tom Waits was called Tiaan Wessels and was sitting in a bar in Welkom he would be singing a boozy song about the circus act that just pulled into town…about a tattooed man who sat around naked, knitting hats, watching porn…about “The Man who Drank His Wife”.

Now if that is not perpetuating myths, nothing is.

(Kathryn Smith has compiled a monograph of Barend’s work for The SMAC Gallery. She asked a few of his friends and colleagues to put down their thoughts regarding his work to assist her in this endeavour…) 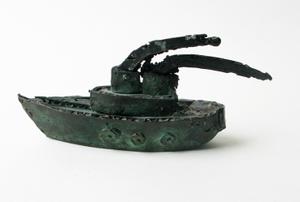