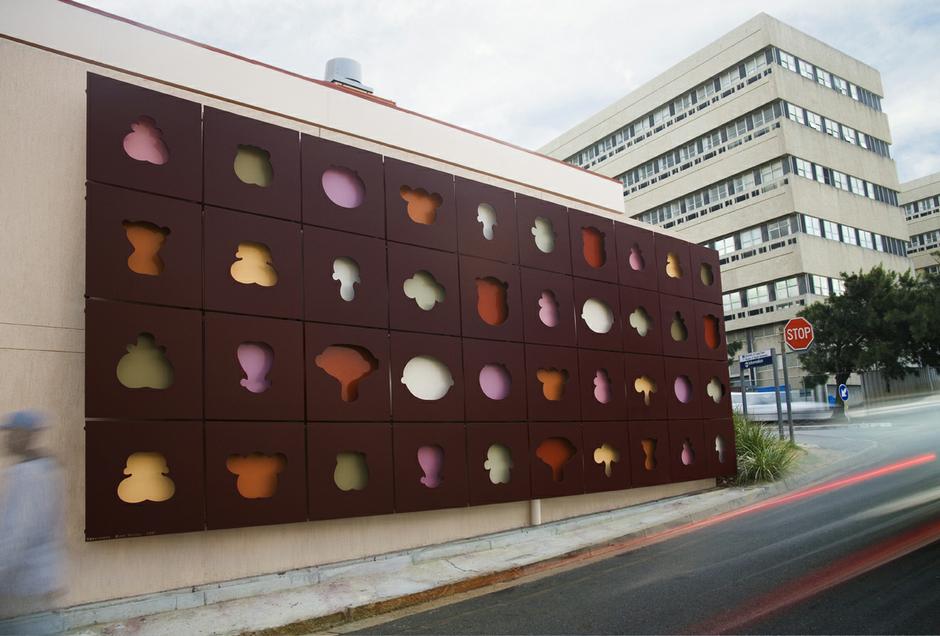 Motorists short-cutting to De Waal drive and red-eyed medical students alike will know Anzio Road well, although neither will probably have given it much thought. Running between a newish shopping centre, the old graveyard and a collection of buildings which make up part of the University of Cape Town’s Medical School and Groote Schuur hospital, the road is little more than functional. Until now that is, since Brett Murray has completed a commissioned work on the wall of the Medical Research Unit that you won’t fail to notice.

Staking its claim on the building’s streetside corner is Murray’s Specimens, which comprises 48 red oxide square steel panels. Each of these panels, installed proud of the wall, features a cutout shape through which is visible a series of coloured backgrounds. The cutouts are bilaterally similar shapes, suggestive of human faces seen from the front. Well, not quite human, but we do recognize bits of ourselves in the images – ears, hairdos and jowls for instance. Of course these are rendered with Murray’s characteristic wit and irreverence, flavoured by his penchant for the pop and the satirical, and produced in his succinct, confident manner.

While the work takes a gentle poke at just what goes on in a medical research facility, its forms are not foreign to Murray’s oeuvre. His Standard Bank Young Artist show of 2002 included two works which are most certainly its forbears. Pale Mutants and White Like Me both featured similar forms, and both explored the nature of classification and generalisation. These are of course very serious subjects, particularly in South Africa, where both are fulcrums on which many balancing acts are daily performed, but Murray is most certainly having a laugh here. (In the catalogue accompanying the show, he lets on that the each of the Pale Mutants represents a friend or acquaintance, so while he may have been having a laugh at our expense, it was an affectionate one.)

Sixteen different heads, eight different background colours and 48 units in all result in a fair but finite number of variants amongst the Specimens. Is Murray suggesting that, while there certainly is the possibility of some variety among us, we can’t avoid classification completely? Or is the spectre of Eugenics and genetic manipulation raising its head here, proposing that some combinations are more equal than others?

Murray’s Pale Mutants could well have been cut from these same sheets of steel as the Specimens units, leaving their negatives for this later work. The earlier piece, however, was painted in the colour formerly known as ‘flesh tone’. In Specimens Murray introduces variety, but not that much of it. Of course one cannot forget that he was probably having some fun with colour here too – you can quite easily picture him flipping through paint samples at his local hardware store.
The aesthetically pleasing is never far and Murray’s pop and graphic sensibilities always precipitate somewhere in his work, but while one can’t forget this, one shouldn’t dwell too long on it either. His sculptural sensibility comes to the fore in the way the work possesses volume, definitively taking ownership of the building’s corner, suggesting even that it occupies some of the interior. This is perhaps a measure of its seriousness, a reminder of the sensitive spots Murray’s work inevitably needles – the issues he picks up on here are ever more pertinent in the country’s shifting cultural and racial landscape. The work’s location in the University’s Medical School, where the most rigorous, rational and scientific enquiry takes place, signals his intention.

Murray has produced a number of public works in Cape Town, the tone and nature of which varies widely. Even the appearance of the works and the visual language he employs has changed and been adapted to the various sites and contexts his works occupy. These earlier works – principally Africa, which is to be found in Cape Town’s St George’s Mall, and Baobabs, Stormclouds, Animals and People which he produced with /Tuoi Stefaans Samcuia in the city’s International Convention Centre – are very different in tone. The former was cheeky, even celebratory, looking at the complex marriage of modernity and tradition that often comprises the continent’s lot. The collaborative work at the Convention Centre looked at aspects of our cultural heritage in a much more reverent fashion.
The closest public relative to Specimens, visually at least, is possibly 2005’s Yesterday and Tomorrow which is installed in the Parliament buildings. Here Murray suspended a series of naturalistic cutout profiles. Inside each of these was a negative cutout of another profile facing in the opposite direction. The fractal-like self-similarity of the works allows you to extrapolate this interpenetration to infinity, but this delight is offset by the serious nature of the images Murray has chosen and the place in which they are sited. In today’s political landscape, as we settle into life in our new democracy, the ideas of cyclical progress and political succession gnaw at one’s perception.

Specimens was commissioned through a programme at UCT whereby one percent of the cost of any new building or significant renovation is allocated to either the commissioning or display of works of art. This is administered by the UCT Works of Art Committee, members of which are appointed by the UCT Council and include Pippa Skotnes from Michaelis School of Fine Art, Anna Tietze from the Department of History of Art, Christopher Peter from the Irma Stern Museum, along with a widely representative collection of academics and professionals in various fields.

In addition to Murray’s work, a mosaic piece was recently completed by Lovell Friedman in the old library entrance a short distance from Murray’s on Anzio Road. Another commission, to be realised by Friedman and Lynne Lomofsky, is planned for the supporting columns of the pedestrian bridge which spans the road there. 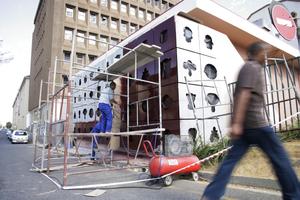 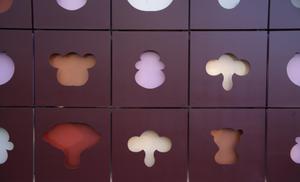