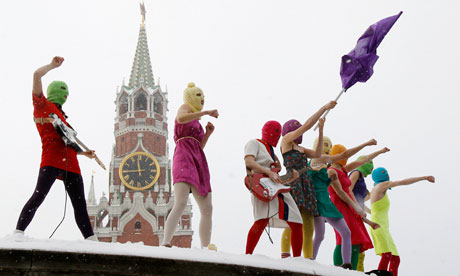 From Hail to the Thief to Ave Madonna: From Presidential Penis to Pussy Riot

As the members of Pussy Riot sit helpless in court behind their cage of glass and iron, watching their fate being played out in court, there is perhaps one hope of absolution: Madonna. The punk band/art collective, who openly admit to the sin of feminism, are on trial for having performed a punk hymn to the Virgin Mary, asking her to rid Russia of Vladimir Putin, at the Cathedral of Christ the Savior in Moscow on the 21 February. Despite the fact that the trial seems to bear all the elements of a farce the threat of a substantial jail sentence is, by all accounts, very real and there seems to be little that can be done legally for the three young women.

However this is where Madonna steps in. For at her latest concert in Moscow she spoke out publically on behalf of the art-protest-collective as well revealing a written show of support printed on her bare back. To be sure there is always a confusing duality in celebrity protest between that of self-promotion versus the bravery to stand up for the repressed. And there is almost always an inauthenticity to such actions. For fame has the merit of the ivory tower and Madonna’s protest, unlike that of Pussy Riot’s, contains not the slightest element of personal danger to it – and authentic actions are to a large degree defined by defying the fears of being sanctioned. For Madonna certainly is beyond the grips of Putin’s political machinations. However, in saying this it should be pointed out that precisely because she is beyond the Russian regime’s grip she can, unlike millions of Russian’s, act with impunity for the sake of three young woman.

And in this regard what seems clear is that already we are seeing international pressure paying some dividends in that the state’s original suggestion of seven years imprisonment has now been reduced to three years. This is although the Russian state prosecutor, Alexei Nikiforov, has seemingly not recanted on the notion that what the three did was ‘violate the traditions of our country.’ And it is here, when government’s begin to appeal to such protean notions such as ‘violating traditions’ to imprison and silence protesters, that perhaps PR and the trappings of celebrity can play an important role. For when confronted with the totalitarian habit of bending laws to include ‘violating traditions’, together with a partisan jury, there is very little that can be done inside the system. As Slavoj Zizek, in his book Violence, points out that in the former Yugoslavia ‘there was the infamous Article 133 of the penal code which could always be invoked to prosecute writers and journalist. It criminalized any text that…might arouse tension and discontent among the public.’ This idea, as Zizek claims, is infinitely plastic and circular in that the fact that you are being prosecuted for ‘arousing tensions and discontent’ is proof enough that you are guilty of ‘arousing tensions and discontent’.

Of course quite recently we have come very close to seeing this autocratic ‘logic’ in South Africa in the case of Brett Murray’s The Spear. And in a sense more disturbingly this malleability of law to bend to the government’s will is what underlies many of the clauses contained within what has been called ‘the Secrecy Bill’. The warning is: allow the law too much flexibility and any dictatorship can use it to their own purposes. It was Isaiah Berlin who admitted that he had, in his earlier work, grossly misunderstood the ideas of Thomas Hobbes, whose Leviathan could meet out any violence upon his citizens so long as it was sanctioned by the law. As Berlin eventually realized, quite the reverse is true of dictators. What dictators do is use laws as a ‘kind of jelly you can shape as you choose from moment to moment. The goal is not to allow anything to set…Stalin made laws which you could be punished for obeying or not obeying at random. There was nothing that you could do to save yourself.’

This was of course certainly true of most of the dictators of the twentieth century and was of course almost perfectly captured by Orwell in his aphorism ‘some animals are more equal than others’. But today we see this method paling slightly. If we are to accept some of the reports that came out at the end of the Brett Murray case, then it turns out that President Zuma’s major fear was not having his painted genetalia on display or the fact that the ANC was seeking to trample on freedom of expression but rather what this incident might do to effect his PR strategy. Zuma, by all accounts, just wanted the whole thing to go away. For unlike some of the more retrograde members of the ANC, still stuck in Soviet era rhetoric, Zuma is clearly beginning to understand the contemporary world and the necessity to get down and pray before the god of PR.

Did Brett Murray’s ‘The Spear’ play the same role as Pussy Riot?

What we did in fact see at the start of The Spear debacle was an attempt to create, in Berlin’s terms, ‘a jelly’ of the notion of freedom of expression. What Jackson Mthembu and others tried to argue was that freedom of speech was in some way synonymous with social cohesion. That was to say that any artwork that might arouse discontent and be an insult to personal dignity was not the same ‘freedom of expression’ as the one inscribed in the constitution. The attempt to gelatinise ‘freedom of expression’ into the same thing as ‘that which promotes social cohesion and respects personal dignity’ was thankfully met with short shrift in the courts. Conversely in the Russian courts statements from the prosecuting lawyers like, ‘Feminism is a mortal sin’, go, for the moment at least, unquestioned and seem to be accepted as a notion inscribed in law.

To be sure the fact that South Africa’s laws are not, to date, the ‘jelly’ that still exists in Russia is hugely to our constitution and judiciary’s credit. However, there are still the rather disturbing forces outside of this solidity as when Gwede Mantashe went on record to say that: “What the ANC cannot win in the courts, it will win in the streets.” However, what is notable about the hindrances that both Putin and Zuma are encountering is that to try and create this ‘law jelly’ is one thing – Putin having to date been far more successful than Zuma – but to try and create it and escape a PR catastrophe is quite another. And this is something that we see with the Secrecy Bill and the ANC’s shyness about actually delivering the coup de grace. This timidity in facing the beast of PR can also be seen in Putin’s rhetoric which seems to have taken on a conciliatory tone in the face of the media frenzy that has been created around Pussy Riot, of which Madonna has been its most prominent voice.

It certainly seems true that although Pussy Riot’s punk-prayer to the divine Madonna, to rid Russia of Vladimir Putin, may fallen on the Divine’s deaf ears, the earthly Madonna, the virgin mother of global PR, has made almost as good an intervention to protect these three brave women as her name sake in heaven could have done. Whether of course this goes to furthering her own (the Madonna on earth’s) brand and PR is largely irrelevant. In a world where Facebook and Twitter can begin and sustain revolutions, governments ignore the power of PR to their detriment.