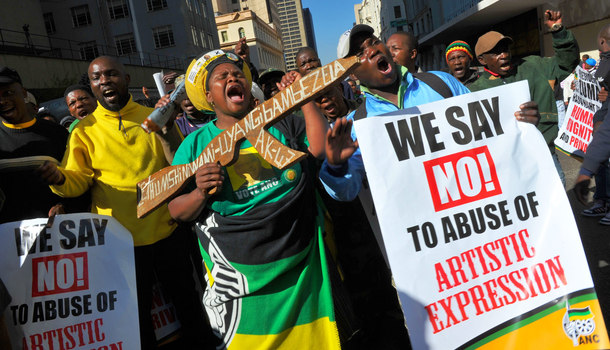 “Mission Accomplished!” cried the ANC secretary-general Gwede Mantashe, at the Goodman Gallery barricades last week, becoming precisely the Lenin-figure lampooned by Brett Murray in his artwork, The Spear, in the first place.

Mantashe’s campaign was a victory, to be sure, and a measure of his effectiveness as a politician: with threats of boycotts and violence, he and his henchmen won on the street what they were manifestly unable to achieve in the courts, and the offending artwork was taken down. In the process, however, the ruling party revealed its own nakedness. The nature of this nakedness is an inability to govern effectively, and an anxiety about its power, even now, sixteen years into its rule.

I began thinking about this after reading one of the more trenchant analyses to emerge in the obsessive two-week-long national conversation that followed City Press’ publication of The Spear. In a column in The Times titled “Jacob Zuma has become the 21st Century Saartjie Baartman”, S’Thembiso Msomi laid out the history of black people stripped naked by white overlords in this country, and urged his readers to understand the outrage against Murray’s artwork in this context.

Msomi described how migrant labourers of his father’s generation had to be “subjected to the dastardly deed of having [their] genitals exposed in public for city officials to decide if they were healthy enough to work.” He reminded his readers of the “tauza” dance, in which black prisoners were forced to dance naked, and he evoked the legacy of Baartman, the “Hottentot Venus” who was exhibited naked in Europe in the late 19th Century.
“What has been most disappointing, for me, about the debate,” Msomi wrote, “is the refusal by Murray and his cheer-leaders to acknowledge that the painting… reopens old and painful wounds.” This refusal led Msomi to conclude that, for many whites, Murray presumably included, blacks “remain second-class citizens who can be stripped of their dignity at will in the land of their birth.”

These words made me cringe, a little, at my own knee-jerk ‘freedom-of-expression fundamentalism’, and the insouciant way I had just put up an image of the artwork at a conference of Africans from all over the continent I was attending in Cape Town. Still, I found myself questioning Msomi’s analysis. Notwithstanding Jacob Zuma’s own personal biography, which must have included being stripped naked before an employer or a gaoler, he is surely not a Saartjie Baartman of our times. Unlike Baartman, or a migrant labourer, or a prisoner, Zuma has power. He is in power. This is the very point of Murray’s artwork.

By stating this, I do not mean to minimise, in any way, the histories of dispossession and disempowerment that Msomi evokes in his article, or that flooded the South Gauteng courtroom when Zuma’s lawyer, Gcina Malindi, wept. Rather, I want to highlight the way that, even as they cry “Mission Accomplished!” triumphantly at the barricades, South Africa’s leaders deploy the history of black indignity instrumentally, as a figleaf to cover the nakedness of their own incompetence or sense of inadequacy.

Certainly, no one can doubt now that Murray’s artwork is an affront to many black South Africans’ sense of dignity: for the reasons that Msomi illuminates, and because of cultural norms regarding the display of genitalia.
Still, the way the ANC harnessed these norms towards political ends is part of a wider phenomenon of cultural fundamentalism at play in various ways on this continent; one which I have been tracking as it impacts upon another practice said to be “Un-African”: homosexuality.
Just two weeks before the Spear brouhaha, the Congress of Traditional Leaders made a submission to Parliament’s Constitutional Review Committee asking for the constitution’s protection of homosexuals to be removed, because the condition did not exist inherently in black culture. Similar positions, buttressed by oppressive legislation, have been articulated by the leaders of many other African countries, from Namibia and Zimbabwe, through Malawi, Tanzania, Uganda, Gambia and Nigeria.

In South Africa, the ANC was quick to distance itself from Contralesa’s position, and the South African government is playing a leading geo-political role in trying to shift African prejudices on this issue. Still, with its response to The Spear, the ruling party has demonstrated its vulnerability to the allure of cultural fundamentalism – or, worse yet, its willingness to deploy culture politically and cynically.

The phenomenon of cultural fundamentalism has a particularly tawdry history in the African region.
It is deployed, politically, by power elites to justify their authority, to deflect attention from their weaknesses, and –most of all – to claim some authority on the global stage as a balm against dispossession: You are owned by China, you are in hock to the West, you are worth nothing. You steer a failed state that is dependent on aid money and – particularly in this era of globalization - you are unable to provide your people with employment.

In this context, the only source of strength you can lay claim to is your culture and your values. More than that: you can actually use your values to show your superiority, in this one area, to the West, that Sodom of homosexuals, that Gomorrah of exposed genitalia.

Such cultural fundamentalism negates the rich cosmopolitan histories of countries such as South Africa. More seriously, it fails to acknowledge – and to make proper use of – the actual power that the South African state possesses to change the lives of its citizens
.
This is not Zimbabwe or Malawi, ruined by disastrous post-colonial policy.Wouldn’t it be great if Jacob Zuma and his mandarins wore the vestments of their very real power with confidence and responsibility, rather than claiming that they have been stripped naked by a white man’s paintbrush and then seeking to clothe themselves in the revolutionary garb of the street?

No wonder some artists succumb to the temptation of drawing our new emperors with no clothes.