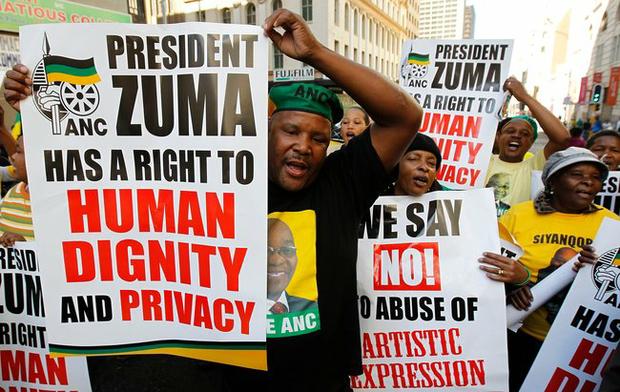 A few random thoughts on an eventful day. (Tuesday)

The anger came after the manipulation (My Tuesday column)

A lot of noise, smoke and mirrors again this week in our beloved land. But despite the smog of opportunism, incitement and rabble rousing, I think we’ll one day look back at the Zuma Spear saga as a helpful one in our project of building a stronger democracy.

The three people who will stand judged by history after this week for their recklessness and irresponsibility are president Jacob Zuma himself, ANC secretary general Gwede Mantashe and SACP leader Blade Nzimande. Not artist Brett Murray, the editor of City Press or the owners of the Goodman Gallery.

Mantashe and Nzimande, acting as Zuma’s re-election battering rams, took what was at most going to be a debate about satirical art and cynically and with no regard for the consequences turned it into a race war and an assault on all black people’s dignity.

What they wanted, I think, was for the nation to talk about something else than the shameful protection of another Zuma storm trooper, former SAPS intelligence chief general Richard Mdluli, and other government failures, and to make Zuma the victim once again, a position that previously helped him become president. If you’re black and proud, you would rally around Zuma, was the message.

Brett Murray’s depiction of the South African president as a fake revolutionary with an open fly was rude, offensive and disrespectful. But there was no racial element in it. If it was relevant that Murray was a white man, then we have to scrutinize his record as an artist to see whether he has been racist during his long career as a creator of satirical art. It would have taken Mantashe and Nzimande, and their rotweiler Jackson Mthembu, three minutes on Google to establish that he established himself first as an artist viciously attacking apartheid and its leaders in the 1980s.

Of course, once Mantashe, Nzimande and Mthembu had sold the idea that Murray (and those who defended him) were racists and that the painting was meant to offend every black person in the country, it generated a lot of genuine anger and dormant resentment – even calls by a religious leader for Murray to be stoned to death. The more the temperature rose, the more the ANC trio whipped up the frenzy.

Insulting one politician is in no way equal to insulting the race, culture or language group that politician belongs to. No, an injury to one is not an injury to all. Zille has been insulted often, and in very crude ways, even by senior ANC leaders, but that didn’t amount to insults to other white people. Mosioua Lekota was called a dog and a snake when he broke away from the ANC.

There were two almost comical incidents during last week’s controversy underscoring the absurdity of the event. The first was Mthembu saying on the E-News Channel that the size of the depicted penis was also a very sensitive issue. The second was Zuma complaining in court papers that Murray was painting him as a “womanizer and philanderer”. Enough said.

Murray’s painting of Zuma can never be divorced from the fact that Zuma’s sexual antics have often been in the public domain, more so than any politician’s in living memory. It would be unthinkable for Murray to have painted any of Zuma’s predecessors or other politicians in this way.

We are a very conservative society, white and black, and I suspect most would not agree with the depiction of a phallus in public art – just as most citizens are probably against gay marriages and abortion and for the death penalty. But this is where responsible political leadership should come in and give guidance on what is principle and what is constitutional. In this, the ANC failed miserably.

I don’t think the ploy by Zuma and his lieutenants worked. The best minds in the ANC itself, including the cabinet, think the campaign and boycotts were wrong and irresponsible. Most black intellectuals expressed their discomfort with the Zuma/Mantashe/Nzimande propaganda war. City Press received a strong surge in its circulation because of the call for it to be boycotted. And Zuma’s public image didn’t improve one iota; it probably took a further dive.

But we’ve learnt some good lessons here about who we are as a nation, what makes us angry and what leaders should and shouldn’t do. White South Africans have hopefully taken proper notice of how raw their black compatriots’ emotions and memories still are. And even the most ignorant among us now know that there is something like satirical art.

PS. Someone asked me on Facebook whether I would have published this painting when I was editor of Vrye Weekblad. Well, that newspaper closed 18 years ago. What I can say, is that I would have published a painting of PW Botha with his genitals exposed if his sex life was as seedy and controversial as Zuma’s. And it would not have amounted to an insult to all Afrikaners.