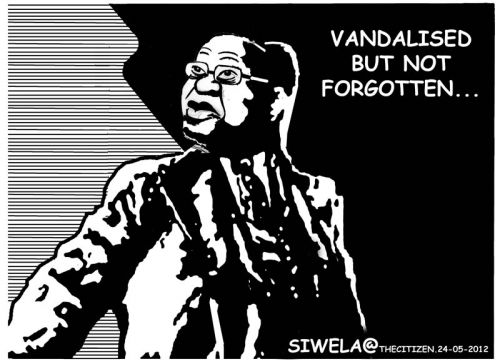 Kentridge: ‘The shock is in the metaphor – Lenin and the penis meeting President Zuma’

Internationally acclaimed South African artist William Kentridge has added his voice to the ongoing debate around Brett Murray’s painting, The Spear, which is on show at Johannesburg’s Goodman Gallery.  President Jacob Zuma and the ANC have filed an urgent application at the South Gauteng High Court against the gallery for the painting’s removal.   City Press ran an review of Murray’s exhibition and published an image of the painting, and Zuma and the party have asked the court to compel the newspaper to remove the image from its website.   The case will likely be heard on Wednesday.

In his affidavit supporting the gallery’s opposition to the application, Kentridge commented on the painting, which depicts Zuma in an iconic Soviet-style pose with his genitals hanging out of his pants.  “Penises, in the age of Aids when explicit sex education for primary school children is de rigeur, are a dime a dozen. Much of Aids education has been to break down traditional taboos of children being shielded from adult sexuality,” he wrote.

“There is nothing shocking in the specifics of the image. The shock is in the metaphor – Lenin and the penis meeting President Zuma.”  Kentridge, who has been exhibiting his work at the Goodman Gallery since the 1980s, said in his affidavit that “the themes and symbolism employed by Brett Murray in his work are typical of the themes and visual language employed by many fine artists in Africa, Asia, Australasia, Europe and the Americas. It is a global, modern language.”  Kentridge said that the overt depiction in Murray’s painting is in line with a “change in attitude towards a public discussion of political power and the sexuality that accompanies power.”

He said that Murray made “no attempt to make an image of President Zuma as a private man with a personal life. The genitals in the image are worn like the coat of Lenin – almost as a badge of office.   It may be an incorrect summing up of the president but it is not an illegitimate subject to address.”  Kentridge said we are “fortunate to live in a country with a constitution that acknowledges the importance of open debate on all issues”.

The painting, he said, is also good for art in general.  “A debate on the questions of power, sex and the depictions of them will be enlivening for not only the visual art world but for all concerned with understanding our and other political situations. Both the work of the artist and the controversy his work arouses are to be welcomed for this. The metaphorics of the emperor’s clothes reappears,” said Kentridge.