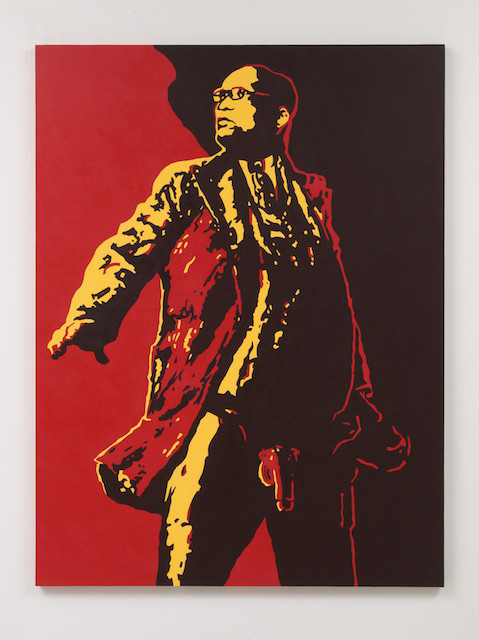 My view on things is often not shared; however, it is my view and I reserve the right to it as enshrined in our constitution. One doesn’t know for how long one will be allowed an independent view in SA, so I’m enjoying mine while I may still have it. People have been up in arms both about the painting and my view. I have been told ‘I have lost all respect for you’, and ‘I am deeply disappointed in you’. Why? They don’t share my view.

I have the utmost respect for the President. I don’t know Jacob Zuma as an individual, but I have heard that he is a lovely man with a good sense of humour and a sharp intellect. The ladies seem to like him. He deserves, as do all South Africans, to be treated with dignity and respect.

I confess that I was shocked – shok-ett-ted – shocked when I saw the painting by Brett Murray. Our President, Jacob Gedleyihlekisa Zuma, genitals exposed. Gasp! Sharp intake of breath! Eyes Wide! Haibo!

JZ has a reputation for philandering, frequent marrying, collecting girlfriends, chowing chamber maids and fathering illegitimate children, so an artist could be forgiven for seeing him as a man led by the long fella. His image in other cartoons, raping justice etc might also lend a nudge to the artist’s chimerical representation.

Many people had a violently angry response to seeing the painting. This is good. Art should elicit a strong response. Therein lies its success. Picasso’s Les Demoiselle d’Avignon provoked hysteria in its day. It was painted in 1907. It portrayed five nude prostitutes. There was outrage. Now the piece is world famous, highly acclaimed and would be a much coveted lot at the auctioneers. It’s Picasso.

A couple of years ago an English sculptor, Jamie McCartney created The Great Wall of Vaginas. He took plaster casts of 400 vaginas and mounted those casts in 40 frames. The piece is nine metres long. It was shocking. It was empowering. It is art. Art has both the right and the duty to be provocative. The Great Wall of Vaginas demonstrates the individuality of each woman. Yes, he could have shown faces, but faces are prosaic. Art has no rights to being prosaic.

It’s far from the first time a penis has been thrust in the faces of the art appreciating public. In early Greek and Roman sculpture the penis is proudly present. As far back as the statue of Zeus, which is 2450 years old and resides in Greece, the penis has been on display. It was a symbol of male pride and strength. Look at Michelangelo’s David’s penis and the virtue of universal man and all that. When a statue of Michelangelo’s David was presented to Queen Victoria in 1857, a plaster cast of a fig leaf was placed over the genitals to protect the sensitivities of the ladies. Today ladies are less sensitive, perhaps because women have suffered too much for too long at the hands of the penis. But that’s another issue for another day.

I don’t pretend to understand this painting. It seems that this artist is making a political statement. At first impression I would imagine it being about power, virility, and dominance. That is what the penis symbolises, is it not? Violence perhaps.

JZ is portrayed as Lenin was once portrayed. The characterised similarity of the intellectual Russian Bolshevik revolutionary and the African capitalist, populist revolutionary is not unflattering. The genitalia display the definitive power tool of the male human. Is that unflattering? It depends how you read it. It isn’t necessarily unflattering. Perhaps the painting is about power leading to corruption and political infringement on the interests, security and welfare of the citizens; or maybe it’s about the scarcity of morals and the surfeit of greed; or political abuse, the rape of the nation. Is the artist seeing the penis as a symbol of denigration? It has to be about something other than the penis. The penis is the symbol, or motif.

Even JZ concedes, though in objection, that he is being portrayed as a womaniser and philanderer. I chuckle at that being his defence in court. What is a philanderer? It’s a man who has many sexual encounters. What is a womaniser? It is a man who likes many women. He likes to nibble them. He likes to nibble them with the part of his anatomy that the artist has exposed to us all. Is that why there is such remonstration?

“It is un-African”, they say. “ We don’t do that in African culture,” they say. I agree. It is un-African. We do not do that in African culture. I totally agree. It is disrespectful in any culture. But art is not bound by culture. The artist colours outside the lines, pushes the boundaries; the artist dares. Art is a medium of free expression and intellectual discourse. It seeks to please no one. It seeks to express, sometimes to galvanize, always to inspire.

It’s interesting, isn’t it, that in all the outrage at the effrontery of the artist there seem to be none who are prepared to challenge their own visceral response. All displayed a totally insular view of the artist and his intent. In fact, no one addressed the art, at all. No one asked the question, ‘what is this painting saying’. I suspect none of them thought to care about the notion of the artist’s intention or what the symbolism of the penis adds. I saw no questioning of the painting. I saw only blind apoplexy.

In my view the president shouldn’t be allowed to take artists to court. Instead of flying into ‘aggrieved ego’ mode every time Zaprio, Africartoons, or Brett Murray illustrate him in a way that he finds disagreeable, I think he should (in this instance especially) interrogate the piece and ask himself if there could be a motive beyond insolence for this depiction.

When he is satisfied that it is not malice, it is art, he should return to his office at The Union Buildings and run the nation. He should build a few thousand schools, and hospitals; a few million houses, communities and roads. He should provide electricity and running water to more than a few million rural villages. He should create welfare for the millions of elderly, unemployed and unemployable. He should create a few million jobs. He should find a cure for AIDS. When he is done he should take another look at how artists choose to illustrate him. He might, in fact, find that by then he’s too busy to care what artists do.