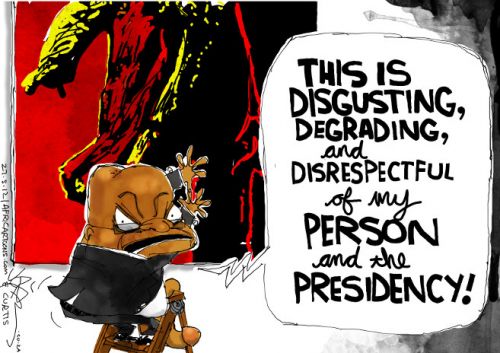 If Jacob Zuma doesn’t like an ‘offensive’ painting, tough luck
Our constitution doesn’t give presidents a ‘right to dignity’ – and neither does some nebulous argument about African sensibility

South African president Jacob Zuma is taking an artist and a gallery to court to have a painting depicting him as a Lenin figure with his genitals exposed taken down. His spokesman says the painting “undermines the esteem of the highest office in the land and impugns the president’s constitutional right to dignity”. His court papers further say his reputation has been tarnished. His children issued a press release and joined him in court, saying the artist has no respect for their father.

Here in South Africa we have been talking about President Zuma’s sexual peccadilloes for a long time. Zuma, who was accused of rape in 2006 (and later cleared), has 21 known children. When he married his latest wife – his fourth current wife and his sixth in total – Zuma told her: “Those who came before you didn’t close the door on you and no one closed the door on them. So I expect you to do the same.”

Analysis of his presidency never concludes with policy discussion – on which Zuma has proven weak – but with his sexual lifestyle. Columnist Mondli Makhanya wrote this week:

“In every other conversation, the debate about the president is not about his political, economic and societal vision, but about which bodily form he is gazing at … the president can spend one whole weekend celebrating his wife’s 40th birthday, spend the following weekend celebrating his own 70th birthday with his three wives and his fiancee, and then spend the entire following weekend turning the fiancee into a full wife. Three weekends of fantastic fun. This is a wonderful country. Truly wonderful.”

Makhanya had his tongue firmly in cheek, of course. In truth, the damage Zuma has done to the image of the black man everywhere is untold. If the image of his two predecessors, Nelson Mandela and Thabo Mbeki, was of nation-builders and cool intellects, Zuma’s is of a man whose concentration is on sex and political self-preservation. He has done more to provide fodder for racist stereotypes than any black South African has done.

Thankfully, enough of us know that the stereotype is false. So what is Zuma’s argument? There is nothing in our constitution that enjoins us to respect the head of state, or to genuflect before him. This is a constitutional democracy, not a monarchy. Respect is earned, and very few would say that the president has earned our respect given his lifestyle. Meanwhile, last week schoolchildren had to go to court to force him to provide books still outstanding six months into the school year. His reputation on this score is in tatters.

All this, however, is irrelevant when one considers South Africa’s constitution – hailed by many as among the most progressive in the world – and its bill of rights. The right to free expression is entrenched. This includes the artist Brett Murray’s right to artistic creativity. In turn, the constitution protects Zuma’s right to privacy and dignity.

As a public figure, however, Zuma’s rights in this regard are limited. Further, his flaunting of his sexuality – he arrives at government functions with all his wives in tow and enjoys suggestively belting out his signature song “Pass Me My Machine Gun” – makes him fair game for cartoonists, artists, satirists and newspaper columnists.

But this is not to say that South Africans are united on this issue. My friend of 25 years was among those who turned up at court in Johannesburg yesterday to have the painting pulled down. He was not there, he told me, to support Zuma. He was there because “in African culture” such depictions are disrespectful.

The culture argument is a nonsense. Just last week an ANC MP said gay people can be cured by a traditional healer because homosexuality was not part of “African culture”. Further, African culture is not homogeneous. And our constitution does not provide for it in any case.

The painting was defaced yesterday. Yet the debate – which has now included death threats against the artist – must go on. If Zuma wins the right to have the painting banned then we must expect to see a country that bends to populism and patriarchal conservatism and not the progressive South Africa which boasts a constitution adopted in Mandela’s day. Today it is an artist. Tomorrow it could be abortion, and gay people, and cartoonists, and books.