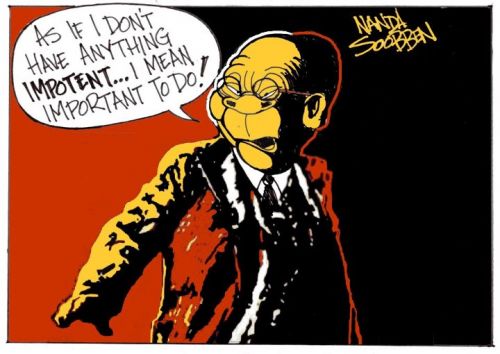 The president who became a joke

Mr President, take the advice Nelson Mandela gave to Bill Clinton and focus on the job at hand - not the distractions, writes Khaya Dlanga

We’ve got to try in whatever little way we can to understand why Jacob Zuma reacts the way he does even though we are no psychologists.   No South African president in modern times has had his private life exposed by the papers as much as Zuma.

From every turn, he has been judged on how he lives his life and little on how he does his job. The papers are forever littered with one scandal or another.

One can almost understand and sympathise with his reaction to the painting. He feels affronted on all levels and all the time. We talk about his sexuality, the number of children he has and the number of wives. Having unprotected sex with an HIV positive woman who was not his wife even though he had more than one wife at the time; and then fathering a child out of wedlock with a friend’s daughter. Every single one of these has been covered by the news on numerous occasions.

It is in this context that the painting by Brett Murray famously known as The Spear came to be. Some say that a great wrong has been perpetrated upon the person of the president, while others say that it is a reflection of facts about how he has lived his life.   He is a man with children, wives and a president. His own children have to see how he is portrayed: his fly open before the world. He is conflicted between being a father and being a public figure and being made a laughing stock. He is a president, not a laughing stock. Laughter is good.   Yet some humour can be a weapon that can wound and kill the soul. Yet what humour can do is bring out the unpleasant truth. As Andre Comte-Sponville once put it, “What it rules out is self-deception and self-satisfaction in the conduct of our lives and our relationships with others.”   One by one, article by article, scandal by scandal, a picture of Zuma was being painted on the minds of the people as a man who can’t be taken too seriously, who just likes to have a good time.

The indignation he feels goes beyond just the painting. He wants to be taken seriously as president. It also explains how he has taken Zapiro to court for his cartoons. He wants to show us that he is a serious man. He also wants to be treated with dignity.   Perhaps he sees his presidency as something that is under siege from the press and that the courts are not on his side. His frustrations are understandable. The press seems to celebrate his failures and sweep his successes under a dirty rug.    In the 1990s, then American president Bill Clinton was followed by a sexual scandal involving Monica Lewinsky. The story was covered by every paper and news outlet 24/7. Even Chris Rock made a rather crude joke inferring that then first lady Hillary Clinton hadn’t done what she was supposed to do, which is how Bill strayed. The joke was of course very shocking. Yet Chris Rock was not sued nor threatened for making such a joke.   Clinton became a butt of jokes. Later, he would say that the way he survived the scandal was listening to Nelson Mandela’s advice, who told him to focus on the work he was elected to do, not on the scandal.

Today, president Bill Clinton is remembered as one of America’s really good modern presidents because he focused on what needed to be done for the American people. He presided over one of America’s most prosperous times, he even left the country in surplus. He focused on the work at hand, not personal affronts.   Earlier this year, a painting of Canadian Prime Minister Stephen Harper by Margaret Sutherland shows him reclining on a chair, completely naked. A dog rests at his feet. The prime minister’s office simply responded, “On the Sutherland painting: we’re not impressed. Everyone knows the PM is a cat person.” They responded with humour. And please nobody start with the “unAfrican” argument because it is has no leg to stand on.

There are some who want to reduce the painting to race and call it racist. Of course it is not. It is just distasteful. Despite its distasteful nature, I will defend the artist’s right to paint it and the gallery’s right to display it. Personal feelings on the matter aside. The great thing about the country though is that the president, like anybody else, has the right to approach the courts about the painting.   The race card argument says that the president has been reduced to nothing but a sexual being, which is how white people see black men. Sometimes I dread the race card because it’s often brought up situations where people are too lazy to think of a proper argument. They gravitate towards what is easy and fail to apply their minds in order to win a harder argument based on real factors for they know that no one will try to debate the race card. There is nothing racist about that painting.

What of the atrocious 2010 painting by Ayanda Mabulu which portrays Desmond Tutu naked, with the Pope’s hand resting on his thigh? The same painting exhibits Jacob Zuma’s penis as well. Is it racist too? There has been no outrage about it, of course. The only thing that I find outrageous about that painting is that it is so outrageously bad, it shouldn’t even be called art.   In the US, the presidential communications department is trained on how to dominate the message of the day, how not to let a story run away. They learn to control the message quickly. A story runs away when you don’t own it. If you don’t own it, you can’t control it. The president became a victim instead of owning the story.   He has been painted as a victim.