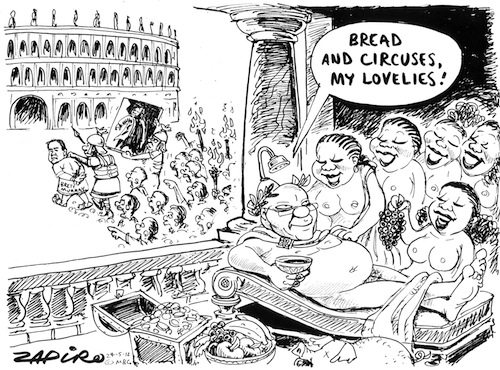 At the South Gauteng High Court on Thursday, President Jacob Zuma employed the reactionary mobilisation strategy that has served him so well.

The strategy has also worked since the ANC first launched a legal and political attack on Brett Murray’s pop-art provocation, The Spear.

“Naked or not, a second term for Zuma” read one poster held aloft by a protester outside the court.

The man who won a ticket to the Union Buildings by trading on being seen a victim of Thabo Mbeki is now seeking, with some success, to portray himself as a victim of white elitists whose disparagement of African cultural norms injured his dignity and repeated the humiliations of apartheid.

Threatened by growing discontent within the ANC and the tripartite alliance over his leadership failures, his sexual mores and his handling of the Richard Mdluli saga, Zuma needed a standard to rally the faithful around. The painting, with its pendulous penis, was a gift from a most unlikely quarter, wrapped up in the pages of City Press.

Murray has repeatedly deployed penises of various colours in his work over the years to examine power and its abuse, but, for the vast majority of people now responding to The Spear, that is irrelevant – for many, the painting reactivates a history of pain and humiliation that cannot be wished away by art historical analysis.

This gets us to the nub of Zuma’s approach over the past week. It is his particular political genius to amplify the resonances between his own pain and that of others – that is how he made himself the spearhead of the pre-Polokwane coalition of those wounded by Thabo Mbeki. And there can be little doubt that many of Zuma’s critics within the ANC feel even angrier about the persistence of white privilege than they do about his many failings. If the choice is between a besieged black leader and a white artist’s freedom to paint penises, the choice is clear.

There is nothing wrong with Zuma and the ANC reacting to the painting in these terms. Murray is capable of defending himself, and his history as an artist bears out both his rejection of racism and his willingness to interrogate racial identity in uncomfortable ways. And many people, black and white, have weighed in to point out that the satire is broad, obvious and clearly political, motivated by Zuma’s public and private conduct. How we can best speak to each other about power and its abuse in a racially divided society is important, it is a debate worth having.

Zuma wants something different. He wants the painting declared illegal, banned from pubic exhibition and expunged from the internet. In the process he wants to erect a new legal standard for the protection of “dignity” that would dramatically curtail freedom of speech and of artistic expression.

Whether you are offended by the painting or not, you ought to be very disturbed by these moves.

Intrusive commentary
Fortunately the court gave short shrift to Zuma’s contention that the offices of the president of the ANC and the country had constitutional rights to dignity and privacy. Such rights belong only to individuals, judges forced Zuma’s counsel, Gcina Malindi, to concede. Indeed, the holding of high public office, far from shielding an individual from awkward scrutiny, justifies much tougher and more intrusive commentary. Not for us the bans on lese-majesty that are still used to protect monarchs and dictators as close to home as Swaziland and as far away as Thailand.

Zuma’s argument relies heavily on the contention that formed the heart of his political reaction to the painting: from an “African cultural perspective” it represents an unjustifiable attack on his human dignity. Opposing views, including those of prominent black artists, were “the most liberal and elitist interpretation of freedom of expression based on their own worldview … informed by their culture and class perspectives”, Malindi said in argument.

In short, Zuma suggests that the legal limit to freedom of speech ought to be set not as broadly as possible, which is clearly what the Constitution demands, but as narrowly as necessary to meet the president’s own, largely unexplained, definition of “African culture”. If this sounds rather similar to the censorship demands made by white Christian conservatives under apartheid, during the United States’ 1980s culture wars and in innumerable battles over artistic freedom for hundreds of years, that is because it is. There is nothing particularly African about cultural conservatism, or about presidential prickliness. Nor is the constitutional right to human dignity a right to protection from embarrassment, whatever your cultural perspective on penises is.

Human dignity is the fundamental right of personhood to equality and to freedom. It is intimately bound up, too, with the right to form opinions and communicate them – that is, it does not exist without freedom of speech.

Dignity in the constitutional sense then is not the same as reputation in the common law sense. It is deeper, more resilient and more important than that. Our law on these questions is largely settled, and it leaves wide scope for artistic expression in general and political satire in particular. Zuma may well want to change that – he should not be allowed to. Only in the space of free, robust and sometimes hurtful exchange can we have the conversations that we so urgently need about race, governance and how best to build a better society than the one we left behind.