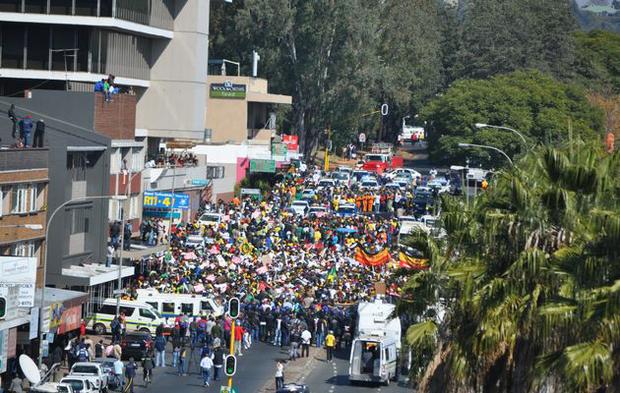 Amid the logic-destroying hysteria surrounding Brett Murray’s (now defaced) The Spear, the Film and Publications Board will sit to decide if personal dignity trumps art and freedom of expression. Eighteen years into South Africa’s democracy and our censorship system is being haunted by that famous dead man, the grand architect of apartheid.

It’s the 1980s. The bad guys are in power. A finger-wagging President PW Botha declares a state of emergency. Israel and the state security apparatus are talking nuclear weapons.

But in a smoke-filled drinking hole, for a brief moment, apartheid’s grand architect comes alive. Hendrik Frensch Verwoerd is the subject of satire in a show at the Black Sun, called Famous Dead Man, created by Robert Coleman and Matthew Krouse.

“At the time it was very much attacking Afrikaners, which was the government, in a very vicious way. Which was certainly cathartic for us, and cathartic for the audiences who saw it and enjoyed it,” writes Coleman in The World in an Orange: Creating Theatre with Barney Simon – a tribute to the Market Theatre’s legend.

Coleman writes that the play was drawn from his and Krouse’s experiences of “the incredible anger about” being in the South African army.
The show ran at Joburg’s only fringe venue – the Black Sun – where it featured weekly for two months. “It was a story about Hendrik Verwoerd and Dimitri Tsafendas, the man who assassinated him. Through Verwoerd’s history we traced the history of apartheid and a lot of apartheid laws that Verwoerd was responsible for,” wrote Coleman, who, with Krouse, reckoned a dead man was the perfect target for satire.

Verwoerd was dead, but his wife, Betsie, was very much alive.

Having read the Sunday Times, Verwoerd’s relatives complained to the right people and, without so much as having seen the play, the then minister of home affairs, Jan Christoffel Botha, stopped the show with a phone call.

Coleman writes: “We had to do a performance for the Censor Board, because they are not allowed to ban a show without seeing it. They all shuffled in in the daytime. All the lawyers and Edwin Cameron. It was terrifying at the time. We completely overreacted. We were going into hiding and terrified of being attacked on stage – which in retrospect is real.”

Famous Dead Man was terminated with an 18-page judgment that cited Section 47 (2) of the Publications Act, which provided that no “section of the inhabitants of the Republic” was to be brought “into ridicule or contempt”. The act didn’t provide for an individual but, in terms of the ruling, Verwoerd was deemed in the instance of the play to have been “chosen as a symbol or representative of a large section in the Republic in an attempt to insult and degrade them”.

The board specifically qualified the word “insult”, saying it wasn’t used in the judgment in an ordinary sense, but rather in the narrow definition of the word meaning degrading or humiliating. Thus the committee decided that Famous Dead Man would be offensive to the “average reasonable man” and was thus undesirable. Krouse and Coleman took the judgment to appeal, no doubt ennobled by Pieter Dirk-Uys, who paid for the legal costs and who testified on behalf of the appellants.

The banning of the play, and its appeal, is described exactingly in a Weekly Mail article reprinted in the book Theatre and Change in South Africa. “When Hendrik Verwoerd’s daughter walked into the room, even Jan van Rooyen, the impeccably sophisticated chairman of the appeal board, appeared to pale a little. If the ghost of Verwoerd himself had burst through the wall rattling chains and roaring, the impact could not have been more unnerving. You could tell that no one had expected her – or the daughter who had accompanied her and who spent most of her energy beaming hard stares at Coleman and Krouse.”

About 25 years after the ghost of Verwoerd stirred that censuring committee, it is unsurprising that the same themes are at play today as the Film and Publication Board postpones its deliberations on Brett Murray’s controversial, and now defaced, The Spear.

As the hysteria and logic-destroying emotion that surrounds Murray’s work builds, it is germane to remember that an Orwellian amendment to the Film and Publications Act is being heard. Introduced in 2010, new provisions to the Act can be interpreted to mean that prior approval is required from the Film and Publications Board before content of a sexual nature is published. This includes magazine articles, films, blogs and even tweets.

Arguments were heard in the Constitutional Court in March to have the amendments to the Film and Publications Act declared invalid. Media lawyer Dario Milo told Daily Maverick at the time: “The bottom line is that the Act requires all publishers of material that contain sexual conduct of a particular nature (which is extremely widely defined) to submit the publication before it is published to the board for classification. The only exemption at present relates to newspapers, which are regulated by the Press Ombudsman.”

The requirement of the amendment is that expressions of a sexual nature must be submitted for classification. Refusal to do so would lead to a criminal sanction for non-compliance.

The government department fighting for this amendment to go through is home affairs, which manages the Film and Publications Board, and has done so since South Africa’s apartheid-styled censorship system was perfected by none other than Verwoerd. It would make greater sense for film and publications law to fall under the guardianship of the department of justice and constitutional development, but after numerous protestations to Nkosazana Dlamini-Zuma, nothing has changed.

The most recent amendment to the act is a step back from the original Film and Publications Act of 1996, which was tabled by Mangosuthu Buthelezi, a champion of free speech. Buthelezi’s act was progressive, and outlawed censorship for all but truly unacceptable forms of expression like bestiality and child pornography. However, post-Polokwane, the regime seems to be cooling free speech and freedom of expression, and it looks like South Africa’s heading back toward the dark Verwoerdian days of censorship.

To appreciate the relationship that Verwoerd and those who followed in his footsteps had with the apartheid banning machinery, it is useful to review the history of censorship. Let’s do this with the help of The Literature Police – Apartheid Censorship and Its Cultural Consequences written by a former South African, now at Oxford University.

“There is an extremely odd, and surprising, linkage between questions of literature and censorship. In South Africa that relationship is strangely complicated,” says Peter McDonald, who wrote the book. In an Oxford podcast, McDonald tells how the first official statutory board of censors was set up in the Union of SA – the racially segregated dominion of the British Empire of the 1930s.

Initially formed to deal with film, these powers were quickly broadened to cover imported books as well. At the time locally published books were covered by common law. “In the 40s and 50s various church groups, primarily Afrikaner church groups, were eager for the government to set up a system that controlled internally produced books as well,” says McDonald.

A feasibility report was done and handed to the Verwoerd regime that was busy with other things and shelved it. But the Sharpeville atrocities of 1960 saw the apartheid government wanting a more draconian hold over publications, and in 1963 a board of censors was set up to vet local literature. Thinking of those days one would be forgiven for thinking that these boards were filled with sycophantic government stooges.

To his surprise McDonald learned that was not so. “We all think that censors will be the equivalent of intellectual thugs, but I was shocked to discover this was not the case. A lot of the censors were leading literary academics, mainly but not exclusively Afrikaners. More perversely, there were some major writers, poets and so on. How did these people get there and why were they running the system?”

After Sharpeville Van Wyk Louw lost the censorship war and the government strategy was to co-opt him and other writers and poets like him. “They set themselves up, somewhat perversely, to protect literature. If these people saw themselves as protecting literature – what did they think that literature was?” asks McDonald.

The result was rulings that had no logical standards, but which were hopelessly compromised and horribly erratic. “For instance you will find that one of Nadine Gordimer’s novels, The Conservationist, which the censors recognised as politically controversial, was let through. But another one equally well written and equally as interesting, The Late Bourgeois World, was banned,” says McDonald.

McDonald says these decisions weren’t simply political or taken by a board comprising stupid censorious bureaucrats. Rather, they were defined by what the board thought was literature. “They would decide because of the particular idea of literature that they had, that this was pornography, whereas this was literature,” says McDonald. Or this was literature but that was dangerous propaganda.

Apartheid’s Afrikaner literati became the perverse censors kidding themselves that they knew what constituted literature and what not.

“Literature is something we can never settle and define. One of the things that’s most interesting about it (literature) is a kind of anarchic lawlessness. One of its basic rules seems to be to break all the rules,” says McDonald, adding: “A radical part of what literature does as a form of public discourse is to radically test what literature is and does. It is constantly testing the limits.”

In the context of a multicultural, radically divided society, what is literature and art and what is not becomes highly contested.

And so it is that the Lenin-esque portrait of our president with a visible penis waits to be classified by a board that ultimately reports to his ex-wife. Will this board see the man, the power, the symbol, the idea or the art?

The answer has bearings beyond art and will determine whether Verwoerd’s system of apartheid-styled censorship will rise like a vulgar ghost to haunt us all, or whether it will rightly be laid to rest.