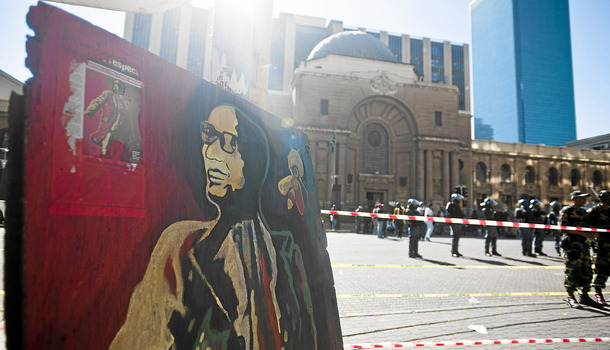 Kill the bogeyman, Save Jacob Zuma

President Jacob Zuma has the inordinate ability to court controversy and whip up emotion in South Africa. He remains the unbeaten crowd-puller who can rally the troops to fight his battles. With internal strife crippling the ANC, a sudden campaign to save Zuma from “racists” and malicious media people who mock his private parts is a welcome boon.

It was always expected that the long-awaited arms deal judicial commission of inquiry would bring the circus to town. With all the sensational corruption claims around the deal and untested allegations against a number of high-profile characters, including a former and sitting head of state, the commission was bound to attract attention and result in accusations and counter accusations in the public domain.

But nobody could have foreseen that a painting – which only a handful of people would have seen had City Press not published it – would create a full-on extravaganza involving President Jacob Zuma and his family, the ANC and its allies, some of South Africa’s top legal minds and the media.

Thursday’s urgent application before a full bench in the South Gauteng High Court to have The Spear removed from the Goodman Gallery and the City Press website was watched around the country, courtesy of a live broadcast by the eNews Channel, and drew hundreds of ANC supporters outside the court.

In scenes reminiscent of Zuma’s corruption and rape trials, the crowds were whipped into a frenzy by ANC luminaries, who led them in struggle songs and chants against “racists” who they claim are assaulting Zuma’s dignity by displaying a painting that shows him with exposed genitals.

It was these very scenes outside Zuma’s court cases that set the ball rolling for his campaign to be president. Shortly after being fired as deputy president, Zuma was charged with corruption. A few months later came the bombshell rape charge.

Thousands of people turned up outside the Pietermaritzburg and Johannesburg high courts to support Zuma, wearing T-shirts with his face and name, and singing songs proclaiming their love for him. Zuma was projected as the consummate victim who had been targeted by state agencies determined to cut short his political career in order to keep former president Thabo Mbeki in power.

Since Zuma became president, his popularity has waned in direct proportion to his diminished contact with ANC supporters and ordinary people, as well as disillusionment with his failing administration.   The fact that he was now in charge of the state, with all the perks and trappings of high office, meant that he could hardly trade on his “victim” ticket – despite the best of efforts of crime intelligence to project him as the victim of a political conspiracy.

Under the leadership of Zuma and secretary-general Gwede Mantashe, ANC structures have been beset by factional battles. The senior leadership of the ANC has been unable to focus the organisation around its programme of action and priority mobilisation issues such as education and skills development.

Instead, the main focus is on the ANC’s elective conference in Mangaung which will either retain those currently in power or see a new slate take charge. The victors will have access to enormous wealth and influence over state resources whereas those who will be beaten face economic and political isolation.

The ANC was at its strongest when it had a single focal point: apartheid. Then its members and supporters were selfless and unyielding in the struggle to defeat the oppressive system and were indifferent to social status and wealth. Most ANC leaders were either in exile or in prison and were held aloft as revolutionary heroes.

With the ANC controlling the state, most of its leaders are now in positions of power, which makes them affluent and highly influential over other people’s fortunes. But millions are left behind in the poverty trap through joblessness and service delivery failure, which builds resentment towards political leaders. The increasing number of violent service delivery protests is a direct manifestation of this sentiment.

Outside its well-resourced election campaigns, the ANC is finding it increasingly difficult to mobilise and organise in this terrain. However, when Zuma was fired and facing criminal charges, ordinary ANC members rallied to support and defend him because he, too, was seen as a victim of an oppressive regime. Like apartheid, Mbeki became a focal point to campaign against.

Following Mbeki’s defeat at Polokwane and his subsequent recall, the ANC again has a problem holding its supporters’ attention. This is evident in the low-key status of its centenary roadshow and commemorative lectures in honour of past ANC presidents.

Although the ANC’s 100th anniversary should ordinarily be an emotive rallying point which resonates extensively, general disenchantment with the current leadership is relegating the importance of the centenary.

Zuma is obviously feeling the pressure of disappointment with his presidency, as evidenced in his speech to the National Union of Mineworkers congress on Wednesday. The president lashed out against those critical of his leadership style, saying “I know what I am doing”.

“I am not here because I got lost somewhere… I was part of the struggle and I continue to be so. I came here walking, knowing where I am going… I am not like people who come today and speak louder, who were not there when things were tough,” Zuma told the mineworkers.

With Zuma feeling under siege, Thursday’s mass display of support at the South Gauteng High Court and the promise of further mass action in protest against The Spear would help take the sting away. Although the controversy and ensuing protest action was not planned, the ANC has grabbed the unexpected gift of a ready-made campaign with both hands.

Anger at what is perceived to be an attack on Zuma’s dignity has unearthed buried emotions over black people’s past humiliations and has sparked antagonism against those who refuse to censor the genital-exposing picture of Zuma. With the original painting now defaced, the anger has been redirected to City Press newspaper, which has kept the picture of The Spear on its website.

The ANC and SACP’s call for a boycott of City Press and further protest action to the gallery keeps the issue alive. It will keep ANC supporters activated and militant. With the picture already viral on the Internet and the original defaced and out of public sight, the court application is now academic. The point of the protest action therefore appears to be moot.

But as long as there’s a bogeyman seen to be attacking it, the ANC has its supporters’ attention. If only the ANC leadership has the ability to keep the bogeyman alive until December, Mangaung would be less of a hazard.

With all the emotion around The Spear, it is difficult to assess how universal the opposition to it is in the ANC, or if the issue is able to unite the many disparate factions. It is perhaps instructive that the ANC’s chief organiser and otherwise head cheerleader, Fikile Mbalula, has not been seen whipping up the troops outside court.

This weekend will reveal how much traction the boycott against City Press has, but the internal machinations of the ANC will be a lot more difficult to decipher.