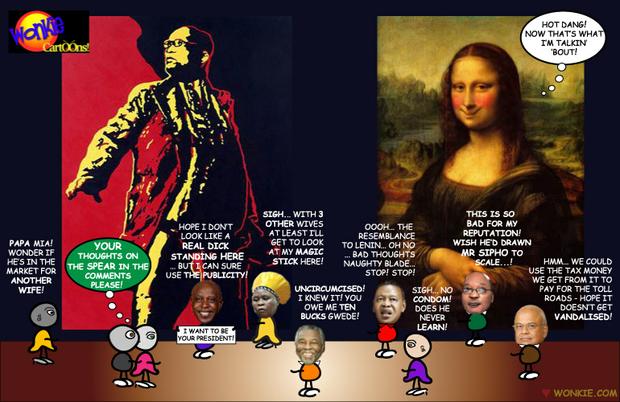 I WAS going to start off this column by repeating the word penis 24 times, 24 words being the ideal length for a punchy opening paragraph. But then a colleague who I hold in high regard said “if you string 24 penises together you might find yourself tripping over a cultural shibboleth.”

And boy, have we tripped over enough cultural shibboleths in the past week, Jacob Zuma’s mythical dignity among them. Thus it is that one of the men who defaced Brett Murray’s The Spear, Louis Mabokela, did so because he was a devout Christian and believed the painting to be pornographic.

Thus it is that Enoch Mthembu, spokesman for the Shembe Church, called for Murray to be stoned to death “because art does not insult others… this is an attack on the culture of the majority, the black people of South Africa. With our culture, we are allowed to marry many women. And white people must understand that and tolerate our culture as we do theirs.”

Thus it is that Moses Mudzwiti, assistant editor of The New Age, can say in his weekly column that “it seems some individuals from Cape Town have a high propensity of expressing themselves in ways that annoy black people. Maybe we should blame it on Helen Zille – she started the taunts with her ill-advised comments that labelled children from other parts of South Africa as refugees.”

Thus it is that Buti Manamela, of the Young Communist League, can say “the defacing of the portrait is people’s justice. We do not condemn it… the two chaps should get the Order of Ikhamanga for bravery.”

Thus it is that Black Lawyers’ Association president Busani Mabunda can say the painting was “equivalent (to) subjecting an individual to cruel, inhumane and degrading treatment… this is a classical case where courts have to come out clearly and unequivocally as to where our nation is headed under our constitutional jurisprudence.”

And thus it is that SA Communist Party general secretary Blade Nzimande, addressing the 14th National Congress of the National Union of Mineworkers in the revolutionary halls of Emperors Palace yesterday, can say: “We want to say to those who are defending this portrait as freedom of speech and expression – there is a big difference between freedom of speech and freedom to insult. It is not you who are insulting us who must tell us how we must feel, but it is us who know how we feel. We have been insulted, our dignity has been assaulted and violated, and we have been made to feel naked. Nobody else, with no amount of English, will make us feel different or change this reality.”

Dear Comrade Blade, finally you’re getting in touch with your inner Stalin. As Minister of Higher Education, as minister in charge of our universities, are you saying that “there is a big difference between freedom of speech and freedom to insult” and that you will therefore see to it that vigorous, rancorous, loud, rude, insulting, crude, rough and tough free academic debate will be on the banning list because people should not be free to hurl insults?

And are you yourself not guilty of the grossest form of insult and hate speech when you call my old comrade Brett Murray a “counter-revolutionary” who “today spews racism and insult (at) the African majority?”

Grow up, all of you.

Context is everything. The Spear is part of a body of work that expresses Brett’s disgust (and mine, by the way) at the way in which the ideals of the African National Congress and the Congress Movement have been perverted, corrupted, and sold off to the highest bidder.

And it expresses disgust at the way in which our president, who should be a figure who is respected and honoured, has instead brought down shame, contumely and ridicule upon our nation, and the office of president of the Republic of South Africa.

As my other old comrade, Jonathan Shapiro, aka Zapiro, put it this week, in a speech bubble above an erect penis emerging from the Union Buildings, “On behalf of my four wives, 22 children, my 13 other children out of wedlock (or is it 14?) and my numerous mistresses, I am outraged at being painted as a philandering womaniser”.

If Jacob Zuma can’t keep it in his pants, he must expect what he gets. And it has got nothing, nothing whatsoever, to do with African culture, racism, or counter-revolutionary art. It has everything to do with a ruling elite that is in deep, deep crisis, and seeks any distraction it can to entertain the masses and keep them on its side.