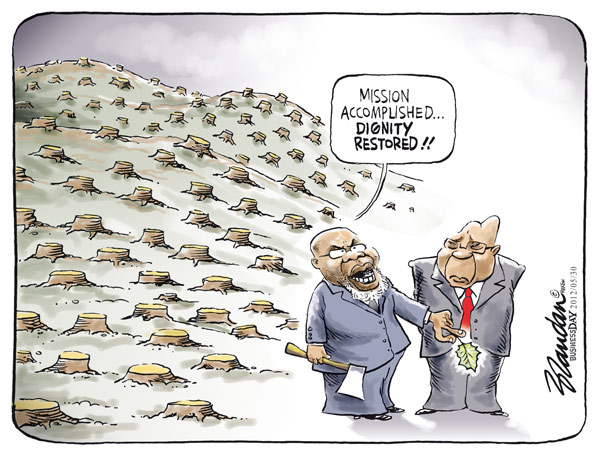 The Spear that divided the nation

BRETT Murray’s The Spear has generated an extraordinary amount of media and political commentary, social media twittering, marches and protests, including the defacing of the painting itself.

The rage expressed by many in response to the depiction of the private parts of the president seemed to far exceed other media controversies of recent years. One thinks here of a number of Zapiro’s rather unflattering cartoons of the president as well as his depiction of the Prophet Muhammad. All of these controversies have drawn attention to the tensions between freedom of expression and religiously and culturally inflected conceptions of propriety, respect and dignity. But there is another angle on the latest controversy that still needs to be addressed, namely the question of how leaders and political parties ought to act when, for various reasons, the “raw emotions” of citizens become available for populist mobilisation.

Was President Zuma neglecting his responsibilities by remaining silent about the verbal attacks on Brett Murray, the Goodman Gallery and Ferial Haffajee, the editor of City Press?

Was the ANC leadership complicit in encouraging dangerous demagoguery that contributed towards portraying Murray as a diehard white racist, ignoring the inconvenient truth that he had also been an anti-apartheid cultural activist? Finally, what are the longerterm costs and dangers for our democratic political culture of the kind of emotionally charged politics witnessed over the past few weeks?

The politics of emotions and affect is starting to get some serious attention in scholarly literature. For example, a recent book by Deborah Gould entitled Moving Politics has shown how, during the early stages of the Aids pandemic in the US, gay men initially experienced feelings of shame, guilt and grief in relation to the social stigma, politics of blame and physical devastation unleashed by the disease. By the late 1980s, activist organisations were channelling these feelings into publicly expressed anger and styles of militant protest directed at an initially indifferent Reagan administration.

In the case of South Africa, the Treatment Action Campaign also proved itself to be extremely adept at transforming feelings of stigma and shame into collective anger against the Mbeki administration’s initial refusal to provide adequate HIV treatment.

Both these cases illustrate how activists were able to forge an “emotional habitus” or affective disposition through organisational practices such as street protests and demonstrations. In other words, these cases show how emotions are often given shape and direction by activists through processes involving “emotional labour”.

Similarly, the anti-apartheid struggle created its own affectively charged expressions of resistance, a political culture that still finds expression in the barricades, service delivery protests, Cosatu demonstrations and ANC rallies. The events leading up to the march on the Goodman Gallery revealed how the ANC is still able to channel “raw emotions” for party political purposes.

The examples above suggest that the political mobilisation of emotion can be put to many purposes and, in the case of Aids activism, these political strategies can lead to constructive democratic outcomes. However, what happens when politicians and leaders deploy and channel affect for narrow party political or undemocratic purposes? What happens when the drumming up of emotions by activists and politicians serves to distract citizens, cloud judgement, facilitate authoritarian populism and undermine democratic rights?

The emotive politics of the sort generated by The Spear controversy takes on a spectacular form that both simplifies issues and limits the horizons of the political imagination, leaving very little room for nuance, contradiction, ambiguity and creativity.

It would seem that the ANC mobilisation against The Spear framed the artwork in terms of a simplistic binary logic of cultural warfare which pitted a disrespectful and racist artist against the president, the ANC and “the people”. Thereby, parody, irony and satire became stripped of any political legitimacy, and the artwork was magically transformed by the ANC’s Big Men – Gwede Mantashe, Blade Nzimande and Jackson Mthembu – into a cultural weapon in a racist war against “the people.”

The ANC leadership was very successful in transforming genuine grievances about The Spear into a populist politics of outrage. This mobilisation conflated The Spear with histories of racism, and linked both of these to the perceived persecution of the president at the hands of the media. Once again, the predicament of “Zuma the Everyman” elicited widespread popular sympathy and support.

Depicting the penis of a powerful black man in a painting as he did, Murray unwittingly tapped into both a historically produced taboo, and a vast colonial and apartheid archive of racist iconography. The deep histories of racist representations of black bodies and African sexualities provided an entry point for the ANC leadership to mobilise public anger.

But there was also another less obvious source for the channelling of popular anger towards The Spear. The obsession of Christian missionaries involved in the European “civilising mission” in Africa was to cover the naked bodies of “heathens”. Nakedness was seen by Europeans as signs of “primitive “backwardness.”

As Jean and John Comaroff note in their seminal account of 19th century missionaries who worked amongst the Tswana, “colonial Europeans in South Africa had insisted, from first contact, that Africans with whom they associated should adopt minimal standards of ‘decency’; that they should, at the very least, cover their ‘private parts’” (1997: 249). Alongside this Christian “civilising mission,” were the scientists who measured and objectified black bodies. The most notorious of these scientific projects were the anthropometric studies of naked Khoi and San bodies, including of course the figure of Saartje Baartman. These histories of Christianity and scientific racism, and the sense of shame produced by these histories, provided the raw material for collective mobilisation against The Spear. Given these deep histories of race, and the ANC’s effective mobilisation strategies, it is not surprising that thousands marched on the Goodman Gallery.

From the perspective of the largely middle class and cosmopolitan cultural elite that frequent art galleries and exhibitions, The Spear, and the other critical art works in the Murray exhibition, was probably not considered to be all that shocking or offensive. After all, many of the members of this elite have at their disposal forms of cultural capital gleaned from exposure to iconoclastic and irreverent artistic traditions such as Dada, punk, and other counter-cultural movements. However, once The Spear went ‘viral’ through its dissemination in the media, it came into contact with other publics that were not at all comfortable with Murray’s edgy and “no holds barred” style of parody and political critique.

It would seem that the artist and the gallery owner did not anticipate how great the distance was between the cosmopolitan art world of the cultural elite and the wider SA society.

The Spear entered a bourgeois public sphere in which it was expected that black South Africans could detach and disassociate themselves from long histories of racism and engage with playful political satire that mercilessly lampooned a heroic black icon of the liberation struggle. This was clearly a big ask for many South Africans. It was of course also a “gift from the gods” for an ANC leadership seeking to animate a flagging Zuma campaign in the run-up to Mangaung.

The Spear controversy quickly became all about the ANC’s attempts to mobilise “raw anger” in order to defend the reputation and dignity of a besieged president, all in the name of “the nation.”

The genius of the ANC was its capacity to transform and channel a widespread, but largely inchoate, sense of shame and grievance into carefully orchestrated and contained expressions of collective anger. In this respect, the ANC leadership perhaps deserves some credit for bringing the country back from the brink it helped create, by channelling and containing popular anger and calling for a national debate on these matters. It is, however, still too early to gauge the longer-term consequences and casualties of the strong arm tactics deployed by the ANC against the artist, the gallery, and the editor.

Professor Robins teaches in the Department of Sociology and Social Anthropology at the University of Stellenbosch.