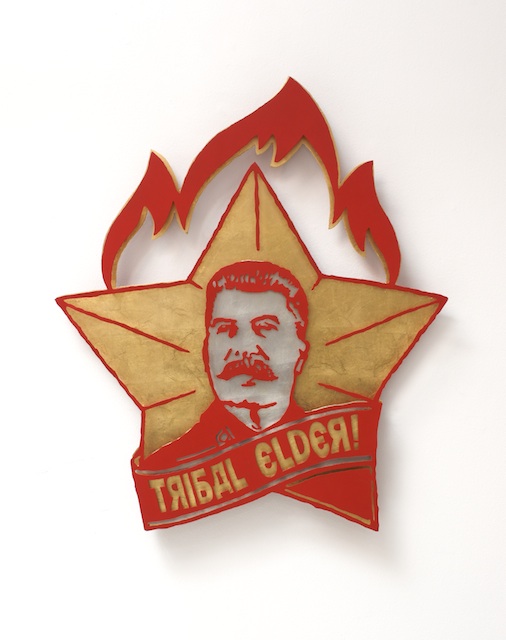 OUTRAGE IS THE MEDIUM

WHEN I first met Brett Murray, some time in the 1980s, he had just finished his Masters degree in Fine Art, and he was busily impairing the dignity of the Voortrekkers, the much mythologised founding fathers of the Afrikaner nation. He rendered them all decked out in their kappies and top hats, playing leapfrog with an inescapable air of bacchanalian, even sodomite, abandon – or, as Murray had it in one of his sculptures just tugging away – “voor-trekking” so to speak, at infantile genitalia.

Then, in a climate where brainwashed white South Africans were losing their lives in undeclared wars in the so-called “frontline states”, Murray set, equally deliberately, about impairing the dignity of SA’s (white) heroes in uniform; and, in the midst of bitter and protracted “states of emergency”, making systematic mock of the authority of the police.

Let us get this straight. Over the years Murray has trashed, lampooned, debunked, insulted, denigrated, or otherwise impaired the dignity of a comprehensive range of figures, icons, stereotypes, and institutions of society.

It is what he does - as is the case with many artists functioning at the cutting edge of contemporary art, the work does not end with the production of the object: it is, so to speak, completed in the public domain, in the responses it provokes, how it is taken up or contested in the arena of culture. In this sense, Zuma through the courts as much as Messrs Mabokela and Le Grange have become unwitting collaborators in a still unfolding semantic drama. So too have a reported 120million internet users watching the court proceedings on Thursday as it all went viral.
But, from the outset, Murray builds in to his work an important caveat: his targets are symbols, they exist, not in themselves, but in language and in public consciousness.

Murray’s characteristic communication strategy might manifest the subtlety of a punch in the solar plexus from George Foreman – or, better, as Murray himself once described it, a smart rap on the funny bone. But this does not mean that his work lacks either complexity or layers of meaning in the interrogation of his subject.

Outrage is the medium in Murray’s work. He routinely turns stereotypes and/or cultural icons into pigs, monkeys, glowering babies, wankers, or just idiots. The message, however, is usually more thoughtful and more complicated.

So, for instance, in a 2005 artwork he parodies those sentimentalising embroidered homilies people hang up on their walls to inspire children. “Dear Lord”, the prayer reads on a pastoral background in Murray’s version, “Look after Daddy while he nukes Iraq. Amen.”

Here the twist in the tail is certainly looking to give offence to the beliefs of Bible belt-type Christians, no question about it. But at the same time, he is making a point about the geopolitical uses and abuses of Christian nationalism.

So too, Murray at least risks - but probably encourages - offence when he gives a negritude-type makeover to the Kentucky Fried Chicken trademark image of Colonel Harlan Saunders, fitting the colonel with an Afro hairdo and a darkened complexion. At the same time, however, there is a considered debate underpinning the gesture, one that touches on some sensitive nerve endings in debates around race, Eurocentrism and cultural imperialism.

Then of course, there is the contested image of President Jacob Zuma… But to what extent is it really Zuma in the first place? The pose, as has been noted often enough, is taken from a more than familiar public sculpture of Bolshevik leader, Vladimir Ilyich Lenin, and comes with a heavy load of association. The portraiture is vague enough for some conspiratorialist observers to have suggested it looks more like Zwelinzima Vavi than El Presidente.

The title “Spear” similarly straddles a cluster of suggestion: “spear” in the SA context evokes, at the same time as it does the phallus, not only the so-called “traditional” weapon of the Zulu nation, but also the ANC’s liberation army Umkhonto we Sizwe, the “Spear of the Nation”. There is, in short, a lot more going on than just a disrespectful reference to Zuma’s alleged philandering.

Even the title of the exhibition as a whole, “Hail to the Thief 2”, opens into other considerations to enrich and bedevil knee-jerk interpretations. It is borrowed from the title of an album by the band Radiohead. But the mock-honorific (parodying “Hail to the Chief”, the tune played by American martial bands to mark the accession of the president) refers originally to George W Bush’s “stealing” of the Florida vote in the 2000 US presidential election – much, maybe, as Zuma has been accused of doing at Polokwane in 2007.

There is a lot to think about in the image that Murray painted, not the least of which is the status of the appended penis in the first place: the fact that it is superimposed, a bit like a rude graffito, rather than integrated, naturalistically, into the composition; the well-entrenched symbolic dimension of the phallus as a token of the patriarchal principle in history; and of course, the ways in which such philosophical issues interlace with bawdier references to sexual appetite.

There’s even something in there about the Emperor having no clothes where it counts, maybe…