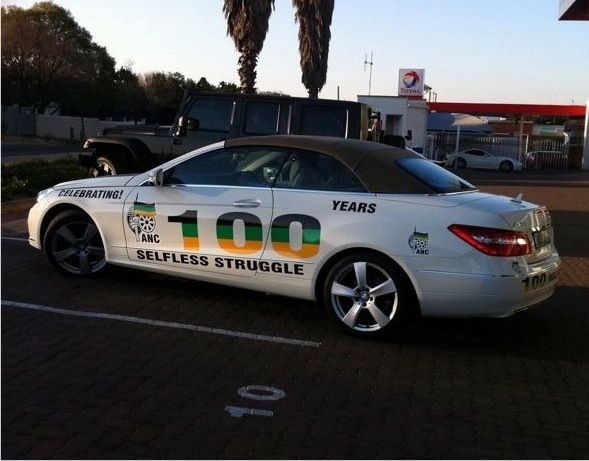 The Spear, Zuma and the ANC in a time of Crisis

[Jansen is the director of Workers’ World Media Productions. He wrote this in his personal capacity]

Now that the dust has settled on “The Spear” painting and the national furore that it caused, it is perhaps a good time to reflect on the issue, especially since the ANC is currently deliberating on its future policies to guide its rule of the country. Brett Murray’s exhibition “Hail the thief” seems to have touched a raw nerve with the ANC and as it turned out, “The Spear” painting was the near perfect pretext for them to deal with the artist and remove his entire exhibition from the public eye. The ANC successfully marshaled its power in various spheres - from rallying the troops in mass protest, a legal challenge through the courts and direct intimidation of the artist, the gallery owners and the media. For a short while, in its response the ANC effectively silenced the direct criticism of its misrule and corruption since this was the main focus of the artist’s paintings.

In this process the ANC conjured up all kinds of ideological arguments to condemn the artist’s work and destroy it and more importantly remove it completely from public viewing. In its attack powerful arguments were used by our rulers ranging from charges of racism – citing colonial discourse with comparisons to Sarah Baartman and Zuma as a similar victim – to cultural and moral discomfort and concerns about Zuma as an “African” father and the nation’s President. Contesting democratic rights contained in the constitution were also thrown into the mix with the artist’s right to freedom of expression and Zuma’s right to dignity.

Suffice to say for now that all of this was just hogwash and boiled down to skillful manipulation to justify repression against the “Hail the thief” exhibition and to prop up Zuma’s waning popularity in preparation for the ANC’s Mangaung elective conference and the challenge of succession.

Suddenly the right to dignity of the individual was equated to freedom of expression – a central collective right and probably one of the most important in any democratic society. In this case that right to dignity has been so undermined by the very nature and conduct of the ANC and Zuma himself.

But more importantly how are we the public, artists and social activists to understand the Spear controversy? Undoubtedly this is part of a growing conservatism and repressive approach by the ruling party in relation to the ordinary masses, political opposition and even within its own ranks. In recent times there have been several examples:
• Zuma’s appointments in the judiciary and especially the state’s security apparatus.
• The Protection of State Information Bill that could effectively criminalise whistle-blowers who expose state corruption and mismanagement.
• The Traditional Courts Bill
• Regular police repression of working class “service delivery” protesters and strikers. The killing of Andries Tatane has epitomized this heavy-handed and repressive approach.
• The recent appointment of Lindiwe Sisulu, a reputed union basher, as Minister of the Public Service to deal firmly with the trade unions and workers’ demands in the public sector.

Why the rightward shift in the ruling party – the ANC in the year of its 100th Anniversary?

We must understand that state power and control over the state is the central axis for wealth accumulation by the previously oppressed black petty bourgeoisie/middle class. This black middle class layer has a voracious appetite for wealth and capital accumulation and after being excluded for more than a century and its impatience has pushed it to a state of “by any means necessary” - irrespective of the socio-economic and political consequences (up to a point that it does not pose a direct threat to the capitalist system and themselves). Historically it is this black middle-class layer of clergyman, lawyers, tribal chiefs, teachers and peasants that formed the social basis for the ANC as a political party and representative of its interests.

Despite its occasional flirtation with radicalism and militant rhetoric due to the intransigence of the white ruling class and pressures from the black working class during the Apartheid era, the ANC has remained consistent in its policies, actions and leadership in the interests of the black middle-class. These interests were initially to seek protection from European colonial conquest and dispossession of its land and later for equal democratic rights, particularly those that ensured equality before the law and a free labour market in order to accumulate capital and wealth.

The ANC as the leader of the liberation struggle in South Africa never had any intentions of liberating the working class from the exploitation and oppression of capitalism. Instead it was quite the opposite, to preserve capitalism but at least to ensure that it develops a non-racial character to enable the black middle-class to elevate itself to being part of the capitalist class.

However, South African capitalism has historically and in the present period been characterized by a deep structural constraints, namely its white monopoly character and a system built on cheap black labour. These were the fundamental features of Apartheid and remain so today. The political deal that the ANC struck with the white ruling class during the early 1990’s ensured the continuation of South African capitalism with the ANC assuming state power and its main protector.

Consequently, the ANC and the black middle have inherited related historical structural constraints of limiting their opportunities for capitalist development due to the domination of white monopoly capital over the economy and the black masses demanding that the legacy of Apartheid poverty and inequality be addressed. However, the ANC chose to promote neo-liberal capitalist growth that had been started by the Apartheid government. In this approach a few ANC leaders were well rewarded and given concessions and became shareholders in the companies of white monopoly capital. Beyond this the ANC pushed on with using the state as its key instrument for capital accumulation by its leadership at all levels. This included Black Economic Empowerment legislation, abuse of parastatal companies, extreme corruption in major state projects like the arms deal, the Gautrain, Eskom and state tenders. This wealth accumulation by the black elite has been rapid and brazen with conspicuous consumption while at the same time the black masses have suffered further impoverishment with the highest level of inequality in the world and poverty affecting 70% of the black masses.

Moreover the ascendancy of the Zuma faction of the ANC coincided with the global economic crisis and limited the state’s ability to ensure concessions to the working class. Instead the Zuma regime has been borrowing money excessively to fund more massive state projects that are likely to benefit the corrupt black elite and white monopoly capital most. In this context the bigger crisis for the ANC is the working class masses. The masses are forced to respond to their worsening situation and increasingly are seeing that the ANC is at the head of attacks against their living standards. With heightened political awareness and stronger organization they pose the biggest threat to the ANC and eventually the capitalist system.

The ANC’s hypersensitivity to criticism and its attack against Murray and the Spear painting is therefore part of a growing conservatism and repression by the ANC government. This is in response to the emerging threat by the masses to its political domination and control over the state as its main means of preserving its newly claimed social status as a wealthy black capitalist elite. This black elite is inextricably tied to and intertwined with the dominant social class in South Africa, white monopoly capital and the entire capitalist system that breeds ever expanding poverty and inequality. Repression is the only realistic means for preserving this status-quo, as fundamental and meaningful social reforms are not possible in the context of international economic crisis.

We must mobilise against the ANC’s attempts to undermine democratic rights and freedoms. As a famous Russian revolutionary, Leon Trotsky, once wrote in response to the Mexican Stalinist Communist Party’s support for legislation that was aimed at curbing freedom of expression (ostensibly of the liberal bourgeoisie of Mexico),

“Theory, as well as historic experience, testifies that any restriction to democracy in bourgeois society, is eventually directed against the proletariat. Bourgeois democracy is usable by the proletariat only insofar as it opens the way for development of the class struggle.”