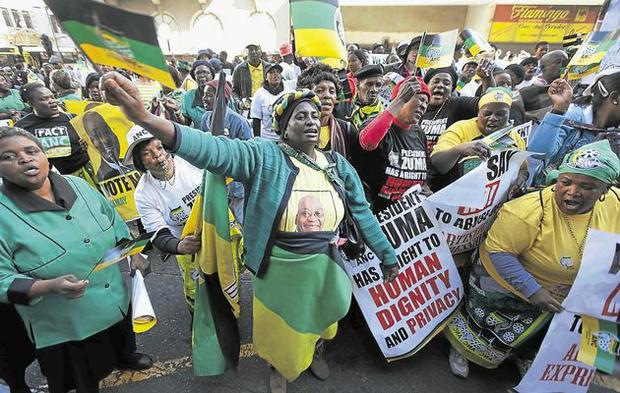 The raw pain inside black South Africans surfaced to remind us we have laid a path back to human dignity for all, writes Justice Malala:

EVERY so often something comes along that affects you so deeply, it shifts the very essence of your viewpoint. When Advocate Gcina Malindi, the senior counsel arguing for President Jacob Zuma in The Spear case, broke down and cried on Thursday, something happened to me.

The very centre of my being moved. I remembered a huge chunk of what I had put away in the deepest recesses of my mind.

I remembered, I was forced to remember, that there is hurt, there is pain, there is anger and there is even hatred in my and my fellow black people’s hearts about what has happened here. I remembered apartheid.

I remembered the disdain with which, whenever I went into the Pretoria city centre, white people treated me. I remembered how, when I was working as a gardener when I was 15, a white man made me work all day and at five told me he was not going to pay me because he did not have money. After an hour of this tawdry squabble, which he thought was hilarious, he finally paid me.

I have had this feeling several times in the past few weeks.

When FW de Klerk, the last president of apartheid South Africa, told Christiane Amanpour of CNN that blacks “were not disenfranchised, they voted. They were not put in homelands, the homelands were historically there,” I recoiled with shock.

I grew up in a village called New Eersterus, in the Hammanskraal area just north of Pretoria. The first residents of this village had been forcibly moved from the “coloured” Eersterus near Pretoria because they were too dark, not “coloured enough”. Those of us who came afterwards and were incorporated into the heinous Bophuthatswana homeland knew this homeland “democracy” was a sham.

Not once did the people of my village vote for Lucas Mangope, the puppet who acted for De Klerk’s government. When the Bop army attempted a coup in 1988, guess who came to Mangope’s rescue? The apartheid government, of course. So much for sovereignty.

Recently, a friend of mine in Cape Town participated in a charity bike ride. Afterwards, he went to a bicycle shop stall and asked to try out their cycles. He and his two boys hopped on the bikes and rode out.

“Stop that thief!” shouted the shop owner. Tens of people ran after my friend. He is black. Virtually everyone there was white. The shop owner, a white man, refused to acknowledge he had acted in a racist manner.

In the sound and fury that has accompanied the decision by Zuma and the ANC to take the Goodman Gallery to court for displaying the Brett Murray painting of Zuma with his genitals exposed, I have been firmly on the side of those who declared the action ill-advised, nonsensical and a poor pandering to one man’s whim above those of our constitution. I wrote that Zuma brought this upon himself: the past seven years have been defined by his flaunting of his sexuality in the guise of nebulous precepts of “African culture”.

Yet I cannot escape the raw and real pain and hurt that Malindi’s breakdown in court underlined. Perhaps, in my defence of the freedoms to express oneself, the freedoms to artistic creativity, I missed something. Perhaps I - and many of the people who have been batting on this side of the field - forgot that these freedoms cannot be exercised in a vacuum.

There is a hurt that is still not processed. There is a pain so infinitely deep and huge that the Truth and Reconciliation Commission has done virtually nothing to assuage it. To many of the people outside court this week, this pain is raw and immediate. To them, Nelson Mandela and Desmond Tutu, with talk of reconciliation, are deluded dreamers.

I know this is true because one of my best friends was standing outside court supporting Zuma on Tuesday. For him, the Murray painting is an assault on blackness. He feels that “whiteness” still has the upper hand and that it continues to dictate to and defile black people in South Africa today.

His words echoed those of ANC secretary-general Gwede Mantashe outside the court in Johannesburg: “Even after 18 years of this democracy, they still want us to dance to their tune.”

“They”, in this case, are white South Africans. This pain we carry around inside of us, exacerbated and reopened by every new slur, is what Dr Mamphela Ramphele has called our woundedness.

We blacks are not the only wounded. Whites, too, are wounded by 46 years of formal apartheid and centuries of colonialism. You cannot be fine when you are fed a diet of racial superiority all your life.

What has hurt most for me, therefore, has been the sheer failure to appreciate the monumental nature of these slurs by many in the white community. De Klerk’s casual dismissal of the fact that the homeland system was an assault on every black person’s very being reopened all the slights that my formative years were made of. Worse still, he reminded me of my brother being asked for a pass, my father being harassed for one, my friends’ incarceration and torture by his regime.

Eighteen years into our democracy, reminders like De Klerk’s, like the racist bike-shop owner, occur. It does not help that when these occur, and there is black outrage, the likes of Western Cape premier Helen Zille brand those blacks who make noise as “professional blacks”. It is as though it is fine to complain if you are white, and not so if you are black.

Did the failure to recognise the deep wounds of our past make us miss a moment in which we could have defused The Spear issue, then? Could Zuma, in his anger and his shame, have decided to let the matter go - or was his and his advisers’ anger so overwhelming they decided to go ahead? Could Murray have, before he raised his brush, wondered about the hurt that we all still carry inside us? Could City Press - despite the fact that in my and its editors’ view it is absolutely within its rights to report on and keep the offending painting’s picture up - have done things differently?

These wounds that are reopened today make Zuma - a flawed character at best - suddenly resonate to more than just his core support base. His pain has reminded many of the slurs of recent months and of the callous, casual, denigration of the black form in the past.

These are painful matters. The most painful and challenging, however, remains the fact that we are a constitutional democracy, that we have a president who is deeply flawed at various levels, and that rights and responsibilities are entrenched in our constitution. These rights and responsibilities will not be tested by normalcy. It is when a Murray comes along, uninvited and unwanted, that we have to stand up and contest this space.

With this hurt in mind, with these bags of pain by my side and by the sides of the Zuma family and the ANC, I return to our constitution and its Bill of Rights. We wrote this constitution. We adopted it with Thabo Mbeki’s majestic “I Am An African” speech ringing in our ears and hearts. We lauded it and we brag about it every day.

For us to enjoy all these and to continue to enjoy them, we have to acknowledge that this same constitution will allow things that pain us, things that kick us in the very heart of our being, to continue.

The depiction of Zuma in such a manner did so to many of our compatriots. Yet that is the bargain we struck.

I have quoted from Mandela’s first state of the nation speech before. I will do so again: “Our endeavours must be about the liberation of the woman, the emancipation of the man and the liberty of the child.”

These are entrenched in our constitution. Zuma should be judged within these parameters and not just in the context of our pain, even though I feel a sickness rise up in me as I write this.

I feel pain, but the painting must stay up, and newspapers must be able to report about it without being boycotted and burnt.