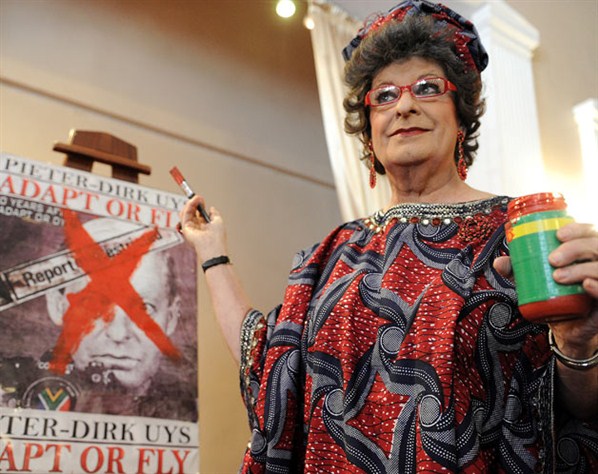 From the sublime to the angry: Pieter-Dirk Uys

‘Hooh, skattie, I can’t believe I’m in Monty Python’s Flying Penis!” exclaimed satirist Pieter-Dirk Uys this week when asked to comment on the national furore around The Spear.

“What we need to do is defuse this as quickly as possible with humour. Remember when there was that screensaver with a gorilla’s face morphing into Mandela?

“A reporter told him about it and what did he say? (Mandela voice) ‘Of course, every gorilla wants to have my face’.”

Uys, who is working on a Christmas show called The Merry Wives of Zuma – a follow-up to his 2009 hit MacBeki – added: “I’m really upset. I’ve just conquered my impression of JZ by wearing a shower cap and now I’ve got to hang my piepie out too.”

He is confused by the outcry.

“It’s not his actual piepie, people!” he cried over the phone from the Western Cape town of Darling.

“So what’s the fuss? It’s like pinning a tail on a donkey. It’s a poep joke.

“The cracked mirror of satire reflects a cracked society. As a satirist, I defend every South African’s right to make fun of things.

“Personally, I try to keep away from that red line – racism. But I don’t see anything racist about this painting. What I find unacceptable is the way that security guard manhandled the art vandal.”

Uys had his theatre work extensively banned during apartheid. Every play he wrote between 1973 and 1976 was barred from being performed.

“Ag skat,” he says today, “the truth is that the censor board became my publicity department and helped make me known.”

Humour, says Uys, is a “weapon of mass distraction” and the president should not have taken Murray so seriously.

“He must rather run the country. Townships are in flames because of service delivery. He could’ve given that laugh of his with that twinkle in his eye and just moved on.

“Really, what happened this week, I couldn’t have made it up even if I tried.”

Yet his jokes mask a concern.

“I worry about self-censorship. Artists will look at this case and say, ‘I better not’. They will be frightened into not showing controversial work and not questioning things. So we must also not be too calm about it.”

Asked how South Africa should move forward, Uys said: “Every South African should walk around with a large banana hanging out of their pants.”