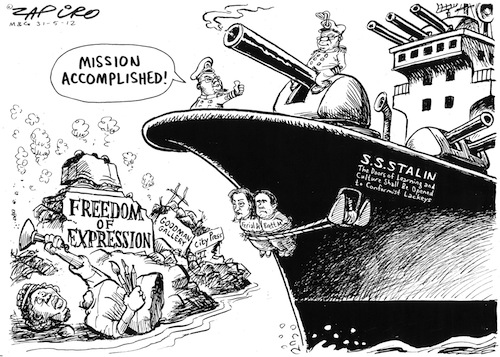 The Spear is down – out of care and fear

The Spear is down. Out of care and as an olive branch to play a small role in helping turn around a tough moment, I have decided to take down the image.   When we published an art review, which featured The Spear as one image, I could not have anticipated that it would snowball into a moment of such absolute rage and pain. Have I been naïve in this? Perhaps.   City Press is not and has never been an object of division; neither am I. I prefer to understand City Press as a bridge across divides, a forum for debate.   We have just turned 30 years old and have exciting plans for City Press, which I do not want imperiled by us being forced into the role of opposition that discomforts me.

My own identity is that of critical patriot, I am a great fan of my country, and that is how I want to edit. Besides, there are really important stories we lost sight of like the continued investigation into Lieutenant General Richard Mdluli, unemployment and the infrastructure budget.  That we are now a symbol of a nation’s anger and rage is never the role of media in society. We are robust and independent, yes, but divisive and deaf, no.   There is a long history of art that has offended in South Africa, some of it the best we have ever made. You can see it here. I hope we are not crafting a society where we consign artists to still life’s and the deep symbolism of repressed artists like China’s Ai Weiwei in China. A society where we consign journalism to a free expression constrained by the limits of fear.

This week society began the path of setting its mores on how we treat presidents in art and journalism; what is acceptable and what is not.   I hope we will reach theses conclusions decently in debates, colloquiums and plenaries rather than setting them in blood or angry red paint or in orange flames snaking up from burning pages.  The other lesson in all of this is that our common national dignity is still paper-thin; that our mutual understanding across cultures and races is still a work in progress and that pain is still deep.

We have not yet defined a Mzansi way of maintaining a leader’s dignity while exercising a robust free speech or reached an understanding that a leader embodies the nation, no matter what we may think of him or her. Neither does it seem our leaders know that dignity and respect are earned qualities too.  We take down the image in the spirit of peacemaking – it is an olive branch. But the debate must not end here and we should all turn this into a learning moment, in the interest of all our freedoms.   Fear  Of course, the image is coming down from fear too. I’d be silly not to admit that. The atmosphere is like a tinderbox: City Press copies went up in flames on Saturday; I don’t want any more newspapers burnt in anger.   My colleague has been removed from a huge trade union congress and prevented from reporting – I don’t want the lingering image (which in any event is viral) to stop us being able to do our core job. Our vendors are most at risk.   It was quite shocking to watch three big men of government, the SACP general-secretary Blade Nzimande; the governing party’s Gwede Mantashe and its spokesperson Jackson Mthembu call City Press all manner of names and to call for a boycott. That they have failed is neither here nor there; that they did mark a moment of inflexion in our society.

It saddens me that not one of them nor a single representative of the governing alliance sought engagement with City Press before seeking a High Court interdict. For any editor to respond to a threat to take down an article of journalism without putting up a fight is an unprincipled thing to do, so we’ve fought as much as we could. It doesn’t serve City Press or South Africa to dig in our heels and put our fingers in our ears.   The threats and invective against the writer of the review and a couple of us in the middle of the debate have been painful and have wrought a personal cost.  In this the national pain which columnist Justice Malala spoke about is ours too.

I have had my intimate body savaged by social media personalities who wanted me, I guess, to feel their own and the president’s humiliation.  I have. An ANC leader from my area on Twitter started a campaign of such disinformation I had to spend much of Saturday night quelling it. He knows where I live. What will he do next? The tweet that broke this camel’s back was one by Patrice Motsepe (see correction below), the businessman and soccer baron whom I have known since university and with whom I thought I had a congenial relationship.  He said I probably don’t want the painting to come down as I need it for the long lonely nights. I presume he meant its phallus. He knows I am single. It must have taken great anger to get a man I know to be of elegance and wit to get to such a point.   I play tough tackle and expect to get intellectually whipped when I do. But this humiliation I can well live without. It’s simply not worth it and I guess we have made our point and must move on.  »