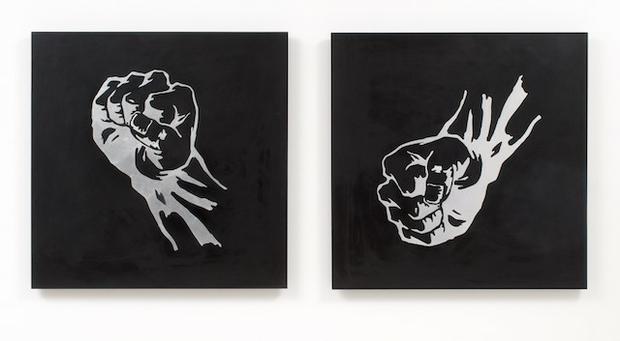 The reaction to The Spear has brought to the fore the narrative of pain caused by colonialism and apartheid. Those stirring the pot may be doing so for political gain, but we need to be reminded of the country’s brutal past. The challenge is now to balance narratives of past dehumanisation with the injustices of the present.

Justice Malala’s Sunday Times piece Why Malindi Cried was widely praised for explaining how The Spear has tortured so many South African nerves. He recalls how the repressed hurt and disdain inflicted by apartheid surfaced when he saw President Jacob Zuma’s advocate Gcina Malindi break down in court last Thursday.

“There is a hurt that is still not processed. There is pain so infinitely deep that the Truth and Reconciliation Commission has done virtually nothing to assuage it. To many people outside court this week, the pain is raw and immediate. To them, Nelson Mandela and Desmond Tutu, with talk of reconciliation, are deluded dreamers,” writes Malala.

That pain was inflicted by a minority-supported system to preserve its own power, wealth and culture. Societies were denied their right to sovereignty as the government imposed puppet leaders and bound them to their oppressors by curtailing their access to resources.

Individuals were stripped of their identity and black people at the bottom of the racist rankings were, in the eyes of many whites, denied emotion, hopes and fears.

This year, more than once, individuals who benefited from this system ripped this scab raw. Both Pieter Mulder, leader of Freedom Front Plus, and FW de Klerk, the last apartheid president, peddled outdated propaganda reminiscent of apartheid-era textbooks from Pretoria’s former department of information.

“All these incidents, small and large, bring back that hurt, that pain, that remembrance that once, not so long ago, we were a subhuman in this country. They bring back the remembrance that the black man was viewed as a sex-obsessed, lazy… well, animal, really. We were not human here,” writes Malala.

Zuma and the ANC also argue that The Spear harks back to historical dehumanisation of the black body. Today, they’re calling on 50,000 people to march to the Goodman Gallery, which first displayed Brett Murray’s painting. Their partners in the tripartite alliance, church groups and much of the public support them.

Despite the obvious political benefits Zuma can draw from adding fuel to this fire, people should march. If they feel their culture has been insulted, they should speak out, remind us of the past, remind us what will not be forgotten and shout back to the revisionist histories of Mulder and De Klerk as the fluid boundaries of the young democracy continue to be set.

But narratives of the past, including the current pain they still cause, must be accompanied by the atrocities of the present. March today against a painting that reminded us of past depictions of the black body, assaulted a leader’s dignity and ripped a scab bare. But also march tomorrow against the continuing assault inflicted on South African bodies.

Is the crisis our children face not dehumanising enough to march about? On Monday the Sowetan’s front cover featured the story of a missing girl who was later found murdered in her family’s freezer. Page two reported a three-year-old boy is presumed dead after embarking on a 35km trek with his 11-year-old brother. These are just two incidents from a litany that should never occur.

Add these to the heinous incidents of rape and gender-based violence. Minister Lulu Xingwana was in Soweto on Monday at a dialogue on the abuse of adolescents.

“The question that the human race must answer is: if animals find it unacceptable to abuse their young ones, why is it that some among us derive pleasure from seeing their own flesh and blood in pain?” she asked.

“Has the human race degenerated to levels that are below that of animals? Could it be that we as human beings and specifically as South Africans have regressed to a point where our society has turned into something worse than a jungle?”

More than half of South African children live in poverty. Over 1.4 million access drinking water from streams, 1.5 million don’t have a flushing toilet in their house, and 1.7 million are still living in shacks. Is this not a continuing insult to dignity?

As the next generation of South African adults continues to be marginalised, women continue to be defined by their bodies. Gender-based violence is a cultural crisis. The situation wasn’t helped by Zuma’s remarks during his rape trial or by Cosatu secretary general Zwelinzima Vavi’s sexist remarks about Helen Zille after the DA tried to march on Cosatu House.

We should be thankful we live in a country where the rights of each individual are enshrined in the Bill of Rights and Constitution. We must be outraged that for many people these rights remain an illusion. Many South Africans are still reduced to subhuman status as they’re denied the benefits reserved for citizens.

March today against The Spear, but the South African body continues to be stripped of its dignity. So tomorrow we must march in numbers matching those outside the walls of the Goodman Gallery. We must march for an end to gender-based violence, for equal rights and opportunities, for housing, access to health services, water and sanitation. We must march for quality education, an economic policy that reduces unemployment, and an end to corruption.

If no one takes action for every dehumanised South African, then it’s true: the tripartite alliance has used the public as pawns for Zuma to checkmate Mangaung. How can we march against the dehumanisation of the president’s body while ignoring the continuing dehumanisation of South African bodies every day, every moment? Is that not the ultimate insult? DM