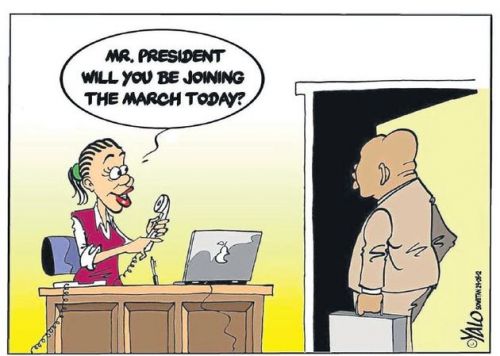 Response to ‘Why Malindi cried’

I have been a longtime great admirer of yours — on TV and in print media. I have just read your extraordinarily moving piece in the Times (‘Why Malindi cried’, May 27). It gave me much to think about.

The pain of which you wrote is of no surprise, nor the anger. The crass barbarism, the degraded inhumanity of so many whites towards black people in our country was why my parents and I spent so many years of our lives engaged in the struggle. That 1994 has not ended the pain and anger is also of no surprise.

Having said all of this however, I was still puzzled that this painting which has received far more than it’s due in my opinion has been perceived as racist, once again provoked those feelings.

Jacob Zuma is a president by whom so many of us feel shockingly let down. You included, I have no doubt. He also happens to be a black man. I saw nothing deriding his blackness in that painting. I thought of the cartoons produced by the Nazis in Germany as part of their vicious propaganda campaign, vicious caricatures of Jews with grotesquely hooked noses, blackened claws. Those were intended as demeaning messages of racial hatred, seething with hatred and contempt: I see no similarity in Murray’s painting.

But perhaps I am missing the point. I hope you’ll accept that I intend no insensitivity to all that his painting provoked. That what you wrote has given me much pause for thought, as I said, about the undoubted continuing insensitivities we all no doubt exhibit.

I find myself living in a country I never imagined could turn into the place it now is, where too many of the wealthy of all races show such shocking disregard for the needs of the still disadvantaged, only a never-ceasing rapaciousness. No doubt as a “white” person, there is much else that I don’t see.