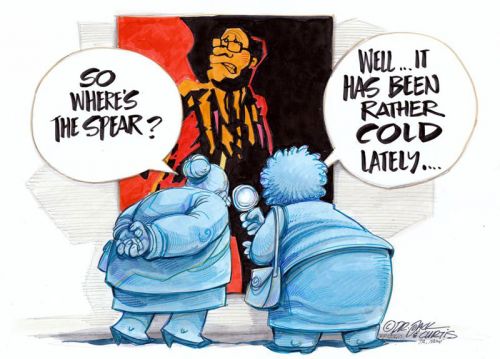 Dumela, Ntate Vavi. This week you shared the stage with fascists and, in that moment, you were indistinguishable from them. I must ask, has your political consciousness disappeared? What has happened?

I have not refrained from greeting you as “comrade” because I feel antipathy towards you. Quite the contrary. Having been brought to where I am on the backs of my parents – former teachers who from meagre earnings pinched and squeezed to see that our family was clothed, fed and educated – I understand, if not sympathise, with the struggles of the working class. As such I have always felt a certain level of camaraderie toward you as one of the champions for workers’ rights.

It’s not the position you enjoy, but how you fulfil it that made me believe that while we might disagree on some of the little things, on the big things we agree. The broad-stroke ideals of justice, fairness, equity and ethical behaviour that you espouse resonate deeply with me.
You and the Cosatu executive have attempted to position your organisation as the moral conscience of the tripartite alliance at a time when the alliance, the single most influential political factor in how the lives of the poor and working class unfold, has been led astray.The poor and the working class pay the largest penalty for this, thus I commend your efforts in this regard.

When the public protector’s report shone light on the cabal of politicians that had congregated around a certain former youth league leader, you decried the hypocritical silence among the alliance’s leadership, who before had been calling for an investigation.

“Comrades,” you said, “let me remind you that such double standards are the exact opposite of communist ethics and morality.”

A few weeks ago, an embittered young man took you to task for your association with the governing party. He said this compromised your ability to speak with authority on justice, ethics and fairness, particularly now, when, by its own admission, the alliance has been infected by a shadow culture that is indistinguishable from the real thing.

The anger and vitriol in that young man’s verbal assault made it easy to brush off what he said. However, how truly compromised you are played itself out for all to see on Tuesday outside the Goodman Gallery.

One by one the fascists – and I do not use the word flippantly – took to the microphone and called for an artist’s work to be destroyed. They said his entire exhibit, Hail to the Thief II, should be taken down and, I suppose, destroyed, too.You shared the stage with these fascists and, in that moment, regardless of the justifiable reasons for your being there, you were indistinguishable from them.

You are famous for your warnings about the predatory elite and political hyenas. You’ve blasted factionalism and criticised crass materialism. You’ve publicly self-flagellated over your German sedan and Sandton house because, across the M1, many Alexandra residents live in poverty.
Thus, save for one painting, the contentious The Spear, the entire Brett Murray exhibit, if taken to be social commentary, did not say anything you have not said before. And by participating on Tuesday, I fear you, too, have acted with double standards and counter to communist ethics and morality.

The painting, if truly an affront to President Jacob Zuma’s dignity – because even that is debatable – did not warrant the manner of reaction it received. You know that.

Of course, being politically astute, you are also aware that one man’s dignity, or even black or human dignity, was not the only thing at stake in this whole debacle. There were those at Tuesday’s protest march campaigning – quite successfully, I might add – for the ANC’s electoral conference later this year. Seeking to maintain the status quo, others protested to silence anyone else who might think to criticise this administration or the governing party’s leadership. And they abused the anger you and others felt over The Spear to do so.
Being politically astute, I take it you calculated the risks and decided, for whatever reason, that the benefit derived from participating in the action against Murray, City Press and the Goodman Gallery would outweigh the risks.

But remember, when political consciousness disappears, it does so quietly. These are your own words.

It disappears quietly in that one is not likely to know when it has gone. I must ask, amid the bluster over the events of the past two weeks, has your political consciousness not quietly slipped away?