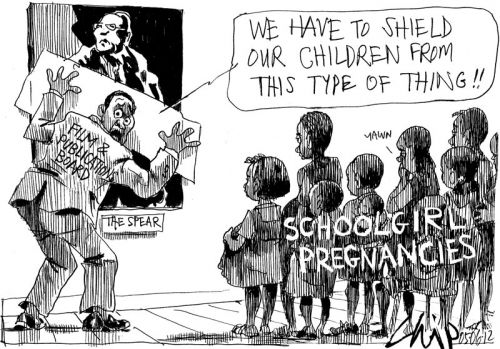 The FPB’s classification of the Spear: The CFCR critique

FILM AND PUBLICATION BOARD DECISION ON “THE SPEAR” UNFOUNDED

The Centre for Constitutional Rights has noticed with concern the Film and Publication Board’s decision of 1 June 2012 to place a classification rating of “16N” on the painting entitled “The Spear” by artist Brett Murray.

Freedom of expression as a fundamental right enshrined in the Constitution is not only safeguarding the right to express oneself, but is also giving effect to other rights as well as values such as accountability, responsiveness and openness. This right is by no means absolute and must be balanced with other rights such as a right to dignity and privacy and can be restricted in terms of section 36 of the Constitution.

a. provide consumer advice to enable adults to make informed viewing, reading and gaming choices, both for themselves and for children in their care;

b. protect children from exposure to disturbing and harmful materials and from premature exposure to adult experiences; and

In terms of section 16(4)(a)-(d) of the Act, the Board through its Classification Committee, has four possible ways in which it can restrict creation, production, possession and distribution of material:

a. classify a publication as a “refused classification” which in essence criminalises the possession, distribution or viewing of a publication;

b. classify a publication as “XX” and heavily restricts possession, distribution or viewing of a publication;

c. classify a publication as “X18” and restricts distribution or viewing if it contains explicit sexual conduct, unless of scientific, literary or artistic merit or is in the public interest; or

d. if the publication contains material which may be disturbing or harmful to, or age-inappropriate for children, classify that publication by imposing appropriate age-restrictions and other conditions to protect children from exposure to such materials.

According to the Board’s statement of 1 June, it had apparently relied on the fourth option, section 16(4)(d) of the Act to justify a classification rating of “16N” of “The Spear”. This implied that the painting was disturbing or harmful to, or age-inappropriate for children. The Board consequently deemed it necessary to protect children under the age of 16 years from exposure to the painting. Whether the Board truly aimed to protect children through its decision is, however, questionable.

Is “The Spear” or duplicate images thereof disturbing or harmful to, or age-inappropriate for children? In context, probably nothing more than Michelangelo’s “David” or the average biology handbook. Does this mean the latter must be restricted as well? Most likely not as long as it does not exhibit an ANC-logo or upsets ANC-leadership.

Although the Classification Committee is yet to release its formal findings, the Board’s statement of 1 June appeared to be less clear about the actual motivation and reasons for its decision. The Board evidently did not spend much time explaining the reasons for restricting the image, but stated: “[i]t is also important to understand that classification guidelines cannot be comprehensive in their identification of all potentially disturbing and harmful materials. In addition, there may be materials which may not be disturbing or harmful but may be age-inappropriate and unacceptable to the community in general”.

In the absence of clear reasons to the contrary, what the Board appeared to be saying was that it could not really find a reason as to why “The Spear” was disturbing or harmful to children. Besides, as the painting could barely be viewed as age-inappropriate, one then has to assume that the fact that it was “unacceptable to the community in general” (meaning that it depicted the President and irked the ANC), carried the most weight in coming to a decision.

This view is enforced by the remark that: “in making the decision on the classification of ‘The Spear’ the Classification Committee noted with much interest that whilst our mandate is primarily to protect and safe-guard the interests of children, in the case before us, it has been the adult and sensitive viewers that have raised the most objection to the work and who have been at the forefront in opposing the artwork”.

The Board hence decided to protect those “sensitive viewers” who are apparently not children: “Equally [to the protection of children], the protection of the sensitive adult viewer from similar exposure is paramount.” This notion has no basis in law. Although any “sensitive adult viewer” - if it is even able to properly and objectively define such an adult - have a right to raise objections and be oppose any artwork, it is not the duty nor within the mandate of the Board to protect those adults or “sensitive” viewers from such publications.

The Board does have a responsibility to continuously “provide consumer advice” (which according to the definition in the Act means to inform the public of the fact that in relation to films, certain sensitivities could be offended) and educate members of the public on the matters related to its mandate. However, reading a “duty to protect” a “sensitive adult viewer” into its mandate is farfetched. The Board can merely advise an adult viewer and leave it to the adult viewer to make his or her own decision whether to view a painting or not.

The Act determines that the Board must provide consumer advice which will enable adults to make informed choices (both for themselves and for children in their care) and must protect children from exposure to disturbing and harmful materials and premature exposure to adult experiences, based on specific criteria.

The Film and Publication Board’s jurisdiction to consider whether a publication should or should not be classified is not disputed. Also, the Board’s interpretation of the definition of “publication” to include a painting and printed impressions of such painting is also correct - although it is highly debatable whether the Board can restrict electronic images on the Internet. In terms of section 16(1) of the Act, the Board, indeed has jurisdiction to consider classification of “The Spear” or any other painting as well as subsequent replications of such a painting, if requested to do so by any person.

Should the Board have gone so far as to restrict viewing of this artwork based on the notion that it appears to be “unacceptable to the community in general”? The short answer is - no. As a matter of fact, it is arguably unfounded in law and probably an unconstitutional limitation of the right to freedom of expression.

Moreover, the fact that the Board’s decision seemed to be primarily guided by a “mixture of emotions from diverse sections of the populace” and its apparent consideration for the “sensitive adult viewer” - all probably euphemisms for “the ANC-party bosses are unhappy”, should be viewed as an alarming precedent in the censoring of politically sensitive art.

It is certainly not the mandate of the Board to interpret the morals and values of the “community in general” and it is not their duty to protect against the offensive. As a matter of fact, the consideration of “public interest” as referred to in the Act, is rather a ground for non-classification in certain circumstances than the other way round. The right to freedom of expression guarantees to each individual the enjoyment of this right, regardless of the will of the majority of the community.

Even in instances of sexual explicit material, which this painting is certainly not, the Constitutional Court held that: “[e]specially in light of the painfully fresh memory of the executive branch of government ruthlessly wielding its ill-checked powers to suppress political, cultural, and, indeed, sexual expression, there is a need to jealously guard the values of free expression embodied in the Constitution of our fledgling democracy” (Case & Another v Minister of Safety and Security & Others 1996 (5) BCLR 609).

The Act determines that classification decisions must be based on the impact of the classifiable elements within the context of the publication being assessed. In this regard, the Board’s reasons for protecting the nation against “The Spear” were unconvincing at best.

How its decision will be enforced or whether this decision will result in further censoring of other artistic displays of nudity or political insensitivity, remain to be seen. All that appears to be rather obvious is that the Board has failed to recognise the difference between what was possibly offensive but not harmful and in doing so has acted in a manner that was not reasonable, necessary or justifiable in an open and democratic society.