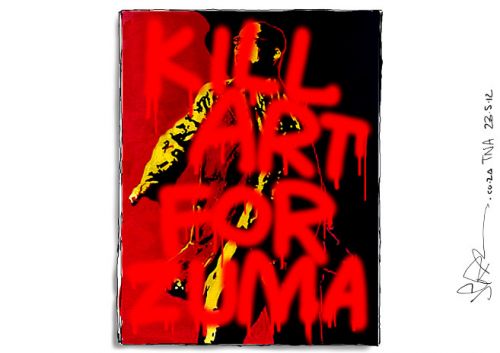 Mantashe must sharpen his spear

I wish I could write about something else, because we all want to move on from the penis saga. But I have been unable to keep an emotional and intellectual distance from the events to do with the painting “The Spear” over the past two weeks.

I have felt strongly about one aspect or the other throughout the twists and turns of the episode started by artist Brett Murray, who vented his disillusionment with the ruling party.

As everyone has come to accept, he is entitled to his views. But some images were undeniably disturbing – and not just the penis one. Last week the Mail & Guardian reproduced a work showing a figure holding an AK-47 in which Umkhonto we­Sizwe combatant Solomon Kalushi Mahlangu’s iconic last words were edited to read: “Tell my people that I love them and that they must continue the struggle for Chivas Regal, Mercs and Kickbacks – Solomon Mahlangu 6 April 1979.”

As someone who idolises Mahlangu, who was executed for my freedom by the apartheid regime, I am quite offended by this work of Murray. He should find something else to trivialise if he wants to make his point about our current rulers.

But, this being a free country, I am sure there are thousands of other people who love this kind of art and who are in the same frame of mind as Murray is. So I will neither seek to ban it, nor will I deface it.

Consequences of bad art
Where I agree with the communists in this matter is that Murray’s participation in the anti-apartheid struggle does not mitigate the consequences of his bad art – or anything that he does today that is in bad taste.

He should be judged by his actions now, rather than by his history. I am aware that he has not sought to do that, but many of his supporters have sought to play the “struggle credentials” card in his defence.

It is nonsense, frankly.

There are many others in our society who constantly throw such claims in our faces to show that they are not racists – when no one has accused them of racism.

The truth is that the painting shows that we are still divided and that race is a dominant factor in that division – although not the only one.

Contrast
Watching the visuals on e.tv of the Goodman Gallery security guard tackling Louis Mabokela, the second guy who defaced the painting, I loudly expressed surprise at the guard’s over-the-top reaction. A white colleague remarked that the head-butting and tackling to the floor were quite normal in rugby – and “maybe in soccer you don’t have those”. He also commented that he thought Mabokela would get “a big, fat tender from Zuma”. One must be careful not to generalise, but the contrast between what we saw and felt was frighteningly stark.

The race thing brewed throughout the saga and the South African Communist Party and ANC leaders milked it irresponsibly throughout.

It leads me to my next point: the behaviour of ANC secretary general Gwede Mantashe. The engine of the governing party is the second-most powerful man in South Africa after President Jacob Zuma. I was disappointed at how he allowed himself to be dragged into this saga and by his behaving as if he was expelled ANC Youth League president Julius Malema.

His call for a boycott of City Press and his repeated lashing out at white people was not worthy of his position. It is one thing when the Communist Party or trade union federation Cosatu makes one of these calls, but it is something else altogether when Mantashe behaves like someone in a lobby group who is not so powerful.

Mantashe should be watching these dynamics and he should be above them. He should have been the one to pick up the phone to call the Goodman Gallery and the editor of City Press to talk to them before resorting to lawyers.

Amicable solution
No one should underplay his anger at the Zuma painting or the Mahlangu rip-off, but Mantashe should have sought first to find an amicable solution rather than to stoke the fires of anger. As he read what he called the “score card” of what the ANC had won over City Press and the Goodman Gallery at the protest march to the gallery on Tuesday, I felt deep disappointment over our country’s leadership.

Our leaders should not be seeking to pummel, pulverise and humiliate those with whom they differ or of whose behaviour they disapprove.

I am not one to exaggerate the role of Nelson Mandela in our history, but it is still remarkable how he contained black anger towards whites in the 1990s while assuring whites that this was also their country and they had a role to play in its development.

It is called leadership.

There is no winner from this “The Spear” episode. But one hopes that the answers to questions of freedom of expression versus the right to dignity and an understanding of the repercussions of public office will also not only be resolved through the courts, but will also generate some kind of dialogue so that we never have to endure this again.