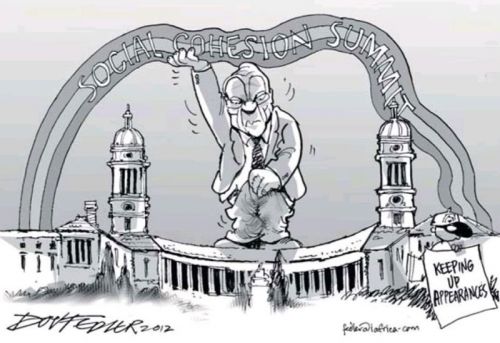 Let’s be clear, Zuma is no Saartjie Baartman

LAST week, President Jacob Zuma called for a summit on social cohesion. This is rich after leaders of the African National Congress (ANC) ripped up the fragile national cohesion with a reactionary campaign over The Spear. While an honest discussion of such a topic would be welcome, Zuma’s fine words were given the lie by a campaign in which the ruling party pretty much jettisoned the idea that it stands for nonracialism and freedom for all.

Now that SA’s own thought police are out making the world “safe” for our children, an honest summit could reflect on three notable aspects of the furore over Brett Murray’s painting: rights, judgment and leadership. Rights were trampled, judgment suspended and leadership nonexistent.

The ANC leaders whipped up an emotional frenzy, while manipulating the painful history of racism to turn Zuma into a victim.

And when you stir the pond, all the muck from below rises to the surface. It sure did, with all the crudeness, leaving behind a troubled national soul, lots of hand-wringing, an intimidated newspaper and gallery, and an anti-apartheid artist branded as a racist.

To Gwede Mantashe, the ANC’s secretary-general, this was “mission accomplished”. He proudly proclaimed this success outside the Goodman Gallery, where one demonstrator referred to Brett Murray as “u nyana ka Strijdom”, meaning “child of JG Strijdom”.

There is much historical pain and memory in our country. But The Spear was a straw man. Looking at the Hail to the Thief 2 exhibition, one finds an angry artist, not a racist, who is disillusioned by the conduct of the ANC’s leaders in power. He is one of many millions, black and white, who are gatvol. They include Ayanda Mabulu, a Cape Town visual artist who depicted Zuma in a similarly unflattering manner.

But never mind the facts. The party’s strategists transformed Zuma, a president living in luxury with a string of wives, into a 21st-century Saartjie Baartman. The latter was a slave whose painful history should never be trivialised.

When racist rightwingers killed SACP leader Chris Hani, the ground was fertile for anyone to whip up an emotional frenzy. But Nelson Mandela prevailed over genuine anger and provided leadership.

Watching Mantashe’s “mission accomplished”, one could only conclude that SA has entered dangerous times. Populist demagogy has moved from the ANC Youth League to the heart of the ruling party.

After the Second World War, Vasily Grossman, a famous Soviet war reporter, wrote Life and Fate, one of the finest Russian novels of the 20th century. He wrote that “human groupings have one main purpose: to assert everyone’s right to be different, to be special, to think, feel and live in his or her own way. People join together in order to win or defend this right. But this is where a terrible, fateful error is born: the belief that these groupings in the name of race, a God, a party or a state are the very purpose of life.” The book was confiscated and destroyed by the KGB. Apparently, its spiritual heirs are alive and well in SA. It seems that both Nzimande and Buti Manamela, the Young Communist League leader who urged that The Spear be torn down, studied hard at the Joseph Stalin school of art criticism.

Now comes the Film and Publications Board to “classify” a piece of art. What’s next? A delegation to Florence to classify Michelangelo’s David? Will Picasso, Goya and our own celebrated Dumile Feni, (who drew black people in the nude!) face the withering criticism of these censors?

What the ANC leaders really object to is criticism of the president, but they hide behind protecting the “dignity of the office” and making his political pain the social pain of all black people.

We’ve all been put on notice. Today they deface the painting; tomorrow they may deface the artist and the cartoonist; and then they will deface you and me for “violating the dignity” of the leader.