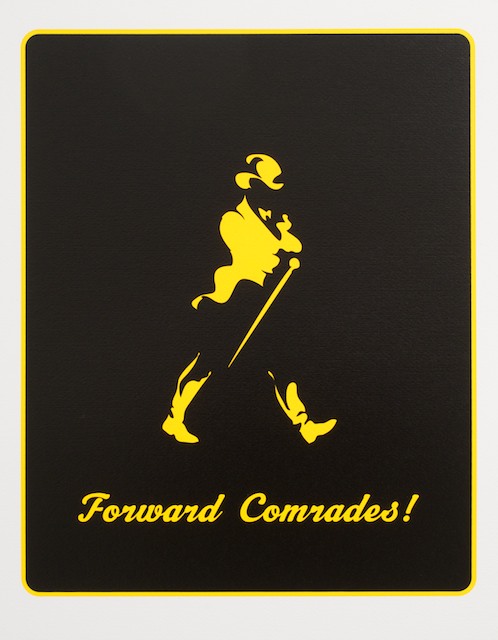 South Africa’s most hated gallery was shell-shocked when I visited it on Friday afternoon. On May 10th, the Goodman Gallery, in Johannesburg, opened “Hail to the Thief II,” an exhibit by South African artist Brett Murray that bluntly, and sometimes entertainingly, criticizes the African National Congress, the country’s ruling party. The exhibit included a portrait of President Jacob Zuma entitled “The Spear,” which depicted Zuma in a Soviet propaganda pose with his genitals exposed. The following week, the A.N.C. demanded that the gallery take the painting down, and the party soon filed a lawsuit against the gallery and the local newspaper City Press, which it asked to remove an image of the painting from its Web site. As I wrote at the time, the controversy took on epic proportions, culminating in two men defacing the painting and A.N.C. leaders bussing in four thousand people to protest in front of the gallery. Last week, the gallery agreed to take the painting down—it will still be given to its German buyer—and City Press scrubbed the image from its Web site. The implications for the future of artistic and press freedom looked, to many observers, bleak.

But the rest of Murray’s work is still up, so I headed there to see what had provoked some to argue that the entire exhibit should be taken down. Lara Koseff, who works at the gallery, gave me a tour of the exhibit, which runs until June 16th and occupies the entire space. The gallery was founded in 1966 as a place where both black and white South African artists could display their work. (Murray is white.) It often showed protest art against the apartheid-era regime that was both subtle and subversive, like an exhibit on the death of the activist Steve Biko at the hands of the police. But it had never encountered a controversy on the scale of “The Spear.”

“We didn’t expect this kind of response at all,” Koseff said. “It was kind of a difficult thing to negotiate. On the one hand, we got the impression that this was political manipulation, and that a lot of people were angry in a way that was manufactured by the ruling party. But, at the same time, there were a lot of people who were expressing their hurt and their anger based on opinions that didn’t appear to be influenced by the ruling party at all.”

After the painting was defaced, the public commotion only became more heated. The gallery received numerous death threats and warnings that the building would be burned down, along with private messages of support. “It felt like mass hysteria,” Koseff said. The gallery’s security guards advised them to close to ensure the safety of visitors, which they did for a week. As the government roared about the President’s dignity, eloquent, nuanced editorials emerged, reflecting the painful memories the painting had evoked—such as the shame caused by strip searches of blacks during apartheid. Even the South African art community was divided. One gallerist told people at Goodman that they should take the painting down because the government pressure was not worth it, while other galleries did not make public statements of support, perhaps out of passivity or fear.

Koseff said that her brother, who works for the city and is an A.N.C. supporter, told her that it was “naïve” of the gallery not to expect the response that they had received to the painting. “Art is about interpretation,” she said. “But you can’t be impervious to those responses against the work.”

I doubled back past a group of giggling private-school girls to look at the exhibit again. A blank wall lit by a spotlight remained where “The Spear” had hung. Murray’s art is often irritatingly obvious about his disappointment with what he views as the A.N.C.’s greed, cronyism, and abuse of power: wall sculptures in red and gold with bling and dollar signs on top of revolutionary slogans and images of Zuma; paintings that appropriate anti-apartheid prints and change demands for freedom to demands for cars and mansions. We get it, I felt like saying.

The controversy surrounding “The Spear” was mostly written about in the foreign press as a race issue, but there were blacks and “coloreds,” as mixed-race people are known here, who told me they had no problem with the painting. Many of them are also fed up with the A.N.C. South Africa is in the grip of very real crises in employment and education which can at least partly be blamed on the country’s post-apartheid leadership. A lack of land and actual salaries for the majority of the population is crippling poor black South Africans, the bulk of the A.N.C’s voter base. The President, during this debacle, however, seemed more concerned about galvanizing support for the next election, in December.

The gallery’s director, Liza Esser, told me that the decision to remove “The Spear” ultimately came to down to sensitivity. There “was real hurt and humiliation,” she said, that was closely linked to memories of a painful time not that long ago. Still, she said, “I think what has happened is very worrying.” She added optimistically, “The fact that the A.N.C. did not ask for the entire exhibit to be taken down gives me some hope that it’s going to be O.K.—that this is more about a political moment in history and getting votes for Zuma in the upcoming election.” The local Film and Publications Board has decided that the painting is pornography, and so the gallery had to take down the painting’s image from its Web site. Other South African sites will presumably have to do the same.

I approached a black visitor on my way out who was getting a bemused guard to take his picture in front of various pieces. I asked him what he thought of “The Spear.” He said that his name was Lefa Lesapo, and that he was an engineer and lived just outside of Johannesburg. He had found the painting inexcusably offensive and disrespectful of the President, but had decided to come check out the gallery for the first time during his lunch break. What about the rest of the exhibit, with its criticisms of the A.N.C.’s alleged corruption and lack of regard for the common people? Lesapo surveyed the paintings silently. “He does have a point,” he said with a tiny smile.