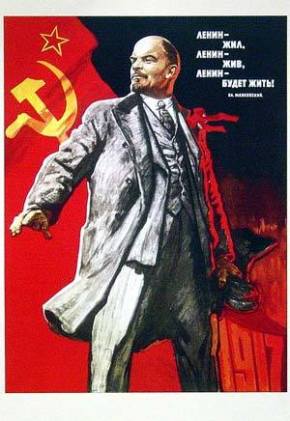 The Spear and the Sickle: Are Zuma and the ANC appropriating the actions of Lenin?

The liberal philosopher Isaiah Berlin famously argued that there where two kinds of liberty. He called them positive and negative freedom. Positive freedoms, he suggested, were inscribed in laws and what has become known as ‘rights’ i.e. the right to water, the right to healthcare, the right to economic freedom etc. Negative freedom was simply the area in life where a human being acted without being coerced by either a person or law.

Berlin’s argument was that although many rights and laws were good, noble and decent they could, and quite often do, come into direct conflict with negative freedom. This was because the ‘rights’ of some could start to define certain human needs and understandings. And the problem with this was that the needs and values of some may come into a direct conflict with the needs and rights of others. He called this notion ‘the incommensurability of values’.

The right to dignity, for example, is just one such right or value that acts in this manner. That is to say that one person’s dignity is another person’s joke. If one person may feel that the exposure of genitals is undignified another may think it to be relatively harmless and maybe even entirely politically necessary and moral. Berlin’s point was that making a rule that protects one person’s concept of dignity is in fact a net loss of freedom because it restricts another person in acting in a way, that they believe, to be either perfectly harmless, and perhaps, in Brett Murray’s case, to be morally good – i.e. his intention was to criticize what he believes to be a patriarchal, corrupt and profligate demagogue.

This was essentially Berlin’s point that, by enshrining one notion of the good one inevitably restricts another person’s equally earnest set of beliefs. Berlin argued that if one starts going too far down this road one does not end up in a free and liberal state but heads towards dictatorship. Define the notion of ‘the good’ too narrowly and one ends up, no matter how unintentionally, restricting other peoples’ beliefs of what is good.

Negative freedom, he claimed, was the simple idea that a human could act in an area without infringing any law or being cowed by any bully. I am free in that no man is master over me in a given situation, and that I can act autonomously without the hindrance of others. Most laws, Berlin argued, were not created with freedom in mind. The law preventing murder, for example, is not, he would have said, freeing people from being murdered but in fact stopping the freedom to murder. Of course stopping people from murdering others (and in particular, me) is a very good idea and there are not only very fine moral implications to this but also rational and practical ones.

But don’t be fooled, Berlin warned, society is not increasing its freedom by having a law that prohibits murder, it is in fact losing a freedom but for some very good reasons. So what then are the arguments for freedom if complete freedom would allow something as egregious as murder? In this regard Berlin proffered several arguments, one was that a certain level of freedom is moral. ‘Paternalism,’ he quoted from Kant, ‘is the greatest form of despotism.’ It also, he suggested, allows people to find their own unique strengths that are necessary for human flourishing. But he also, at times, displayed some sympathy for one of John Stuart Mill’s arguments for freedom and that was that freedom had an instrumental value.

This idea in some ways goes back the observations of Hume, who was one of the first people to realise that morals and values are relative. Relative to time, place and culture, values more often that not changed organically and that there was nothing necessarily morally progressive about this growth – great barbarism could follow years of great social and spiritual enlightenment and vice versa. Mill believed that one way of ensuring that positive progressive development takes place in a society was a fundamental subscription to the ideals of freedom. This was because Mill claimed that freedom had not only moral qualities, as Kant had argued, but also that it had practical ones.

Mill stated that ‘due to the imperfect nature of the human mind the interests of the truth require a diversity of opinions.’ That was to say that ‘experiments in living’ would reveal results that may not be those that are predicted by blindly holding on to certain cultural practices. And that only in an open and free society that was underpinned by deliberative decision-making processes could sustainable progress be achieved. According to Mill even if somebody expressed the most the most vile and immoral doctrine, freedom of expression should allow it to be aired. This was because, so long as there was no physical threat to others, this expression may go some way to resolving an issue if only in that it would allow for others to express that doctrine’s negation.

And this is broadly speaking one of the most regularly quoted defense of freedom of expression. But ironically Mill’s limits of freedom of expression was ‘that it is acceptable to claim that corn dealers starve the poor if such a view is expressed through the medium of the printed page. It is not acceptable to express the same view to an angry mob, ready to explode, that has gathered outside the house of the corn dealer.’ And it was this very sentiment that COPE’s leader Mosiuoa Lekota expressed when he stated in parliament , ‘when the ruling party, that is, the government …threatens to unleash mass force on society, the constitution is thrown out of the window.’

Sadly the whole Murray incident has displayed, for all the world to see, South Africa’s complete lack of democratic maturity. For a court application to have been abandoned and the response to have degenerated into mass marches and paint throwing sadly shows the petulance of a country whose rulers and citizenry prematurely ejaculate without even the slightest regard for the constitution and the free deliberative structures available to us as a democratic society.

What is even more disturbing is that not only have Mill’s instrumental uses of freedom been trampled on but in fact more importantly Berlin’s concerns regarding what may result from the hegemony of certain values also seems disturbingly relevant. Berlin’s exposition of where these kinds of attitudes may lead now should come firmly into focus. Berlin claimed that forcing one interpretation of something like ‘dignity’ onto a society would ultimately result in despotism. And this in fact is the very idea that underpins our constitution; that is to say that there should be no cultural hegemonies – one man’s manners are another man’s manacles. No one culture should make demands over another. The fact that one culture finds it completely unacceptable to display a penis and another culture hardly bats an eyelid does not mean that the one culture can demand the removal of the penis.

What underpinned our post-apartheid settlement was that no one race or culture should be allowed to dictate their preferences over any other. Under our liberal constitution just because I maybe Muslim doesn’t not mean that I can demand that nobody must be allowed to drink alcohol. And just because I am a Catholic doesn’t mean that I can tell President Zuma that he must only have one wife – despite the fact that polygamy deeply offends my cultural and moral sensibilities. As a Musolic I must just accept that other people do things that offend me but so long as they are not physically abusing or defaming me I must accept the fact that I cannot and should not stop them from acting in the way that they see fit. After all if I stop them form acting in a way that they believe to be moral no doubt they will try to do the same to me. This was precisely the very situation the Berlin saw as humanities greatest threat.

What this means, and seems so difficult for the conservative patriarchal element of South Africa to get to grips with, is that, in a pluralist liberal society, if you don’t like it, and it is not directly and unfairly harming you, then you just have to accept it. Or at least try to explain your concerns in an open deliberative process. Now perhaps we should heed Berlin’s warning in his celebrated essay “Two Concepts of Liberty” that by bullying one culture to accept another culture’s understanding of what human dignity is, is not only coercive but leads to autocratic dictatorship.

Berlin often stated that this was in fact the essential problem with Leninism; that its interpretation of what human needs are and what it is to be moral were too narrow. This would inevitably result in what Lenin stated was the reason for his brutal and coercive actions i.e. ‘to make an omelet one has to break of few eggs’. Or to put another way, when I know the ‘real’ (in this case ‘African’) dignity, then “I can ignore the wishes of other men or societies, bully, oppress and torture them in the name and on behalf of their ‘real’ selves” (Berlin, p133). This doctrine for Berlin, whose family had fled Lenin’s Bolshevik terror in 1918, was anathema. Of course the irony of all of this is that Murray’s painting of Zuma was in fact based on a depiction of Lenin. This now seems entirely appropriate seeing as Zuma and his acolytes’ demands have been that, in their terms, ‘African dignity’ should take primacy over the freedom of expression. This is the very kind of Leninist approach that Berlin, and indeed our constitution, sought to subvert in the name of an open, pluralistic and liberal society.