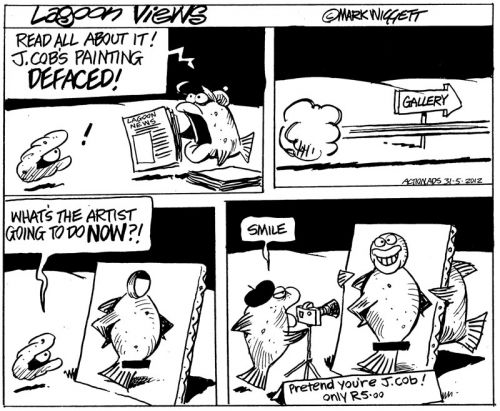 This was the first time that the cabinet lashed out at the painting with one voice since the portrait was displayed at the Goodman Gallergy in Johannesburg last month and distributed on the website of the City Press newspaper.

“Cabinet expressed its disapproval of the Brett Murray portrait that depicted the president in a denigrating manner,” it said in a statement. Murray is the artist who painted the portrait.

“This depiction also showed disrespect for the office of the president and the culture that he shares with millions of people.”

The painting was an insult to Zuma’s dignity, office and culture, the statement said, adding that freedom of expression should not be used as an excuse to violate others’ right to dignity.

The cabinent made the statement after Zuma said on Thursday that freedom of speech is important but it is not superior to other rights, including the right to dignity.

South Africans must disabuse themselves of the notion that certain rights are more important to certain sections of South African society than others, Zuma told the National Assembly.

The ruling African National Congress (ANC) on Wednesday withdrew its legal challenge against the Goodman Gallery and the City Press after a series of meetings between the ruling party, the gallery and other relevant stakeholders, aimed at hammering a solution to the explosive issue, and creating peace and harmony among the diverse South African cultures.

The gallery conceded that it was saddened by the “hurt” the painting had caused, adding that this was not its intention. The City Press also apologized and agreed to remove the painting from its website.

The painting sparked a national debate on the issue of freedom of expression and the right to dignity.