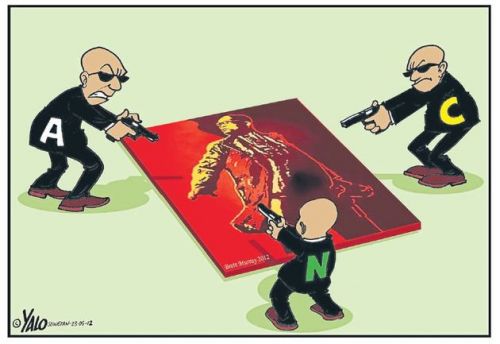 Gallery refuses to remove ‘spear of the nation’ artwork

Johannesburg’s Goodman Gallery will not remove a painting of President Jacob Zuma with his penis exposed because that would be censorship.

Johannesburg’s Goodman Gallery will not remove a painting of President Jacob Zuma with his penis exposed because that would be censorship.

“We feel it is censorship to take the image down,” gallery spokeswoman Lara Koseff said on Friday.
The ANC earlier sent the gallery a letter from its lawyers demanding its removal. The ruling party also wants an image of the Brett Murray painting titled “The Spear” removed from the City Press website.
The newspaper refused, saying it would leave it to a court to decide.

Goodman Gallery Director Liza Essers said in a statement: “It is a sad day for South Africa when creative production is being threatened with censorship from our ruling party.

The artwork forms part of Brett Murray’s Hail to the Thief II exhibition, currently running at the Goodman Gallery. It is inspired by an iconic image of Lenin, and shows the president with his genitals on display.??“This disgusting and unfortunate display of the president was brought to our attention by one of the media houses and we have physically confirmed this insulting depiction of the president. We have this morning instructed our lawyers to approach our courts to compel Brett Murray and Goodman Gallery to remove the portrait from display as well as from their website and destroy all printed promotional material.

We have also detected that this distasteful and vulgar portrait of the president has been displayed on a weekend newspaper and its website, we again have instructed our lawyers to request the said newspaper to remove the portrait from their website,” said the statement issued by ANC spokesperson Jackson Mthembu.??The statement said the party believed that the dignity of Zuma, as “our president as both president of the ANC, president of the republic and as a human being has been dented by this so-called piece of art”.

??Murray told the Mail & Guardian on Thursday afternoon that his work “speaks for itself”.??“Have a look at my show and see what you think. How I articulate myself is through my work. Those are my ideas.”??The ANC said they were also of the view that the “distasteful depiction” of Zuma had violated his individual right to dignity as contained in the Constitution.?

Constitutional law expert Pierre de Vos said on his blog on Thursday that the party may not be aware of the fact that section 16(1)(c) of the Constitution states that everyone has the right to freedom of expression, which includes “freedom of artistic creativity”. De Vos included the image in his blog and encouraged people to distribute it.??He said: “It is true that no right is unlimited but even where the right to free expression is limited an exception is usually made for artistic expression. Our law often distinguishes between real depictions of individuals and art works and hardly ever allows for the censoring of the latter. For example, section 12 of the Promotion of Equality and Prevention of Unfair Discrimination Act [which prohibits hate speech] explicity makes an exception for a ‘bona fide engagement in artistic creativity’. Section 3 of the Film and Publications Act contains a similar exception.”??

“The fact that the ANC seems incapable of distinguishing between a work of art and real life will probably ruin their legal case they are planning to launch. As this is a work of art, there is no chance that any half decent judge would grant the orders requested by the ANC, first, because there is no law that prohibits an artist from making such a portrait and second, because if there were such a law it would be unconstitutional,” wrote De Vos.

??Mthembu said in his statement: “The ANC believes in both freedom of the press and artistic expression. The vulgar portrait and the dismembering of the ANC logo by Brett Murray is an abuse of freedom of artistic expression and an acute violation of our Constitution, apart from being defamatory. That is why we have instructed our lawyers to approach the courts in-view of these violations and the defaming nature of the so-called President Zuma portrait titled The Spear.”

Essers said: “As with all of our represented artists, the Goodman Gallery wholeheartedly supports Brett in his creative endeavour and believes that the controversies surrounding this show will generate a valuable dialogue about contemporary South Africa. But the works in no way infringe South African law, with the right to freedom of expression guaranteed in our Constitution.”

Meanwhile, the presidency said on Friday that the preisdent’s rights had been violated.

“The presidency is shocked and disgusted at the grotesque painting by Brett Murray depicting President Jacob Zuma in an offensive manner,” spokesperson Mac Maharaj said.
“We are amazed at the crude and offensive manner in which this artist denigrates the person and the office of the President of the Republic of South Africa.”

Maharaj said Zuma was among the primary architects of the Constitution and Bill of Rights, and would defend those rights, but people had to realise they were not absolute.

“Nobody has a right to violate the dignity and rights of others while exercising their own,” he said.
Zuma was also a citizen with a constitutional right to dignity and “no human being deserves to be denigrated in this shocking manner”.

The presidency was concerned the painting “perpetuates a shocking new culture by some sections of the artistic world, of using vulgar methods of communicating about leading figures in the country, including especially the president”.

Maharaj said because of “intense hatred” of the new democratic administration or the ruling party, artists were failing to ensure disagreements were communicated in a cultured and civilised manner.

The presidency was also shocked that some media house were eager to publish the work.

According to Brettmurray.co.za, he studied at the University of Cape Town where he was awarded his Master’s of Fine Arts degree in 1989 with distinction. The title of his dissertation is A group of satirical sculptures examining social and political paradoxes in the South African context. As an undergraduate he won Irma Stern Scholarships in both 1981 and 1982. He won the Simon Garson Prize for the most promising student in 1982 and was awarded the Michaelis Prize in 1983. As a postgraduate student he received a Human Sciences Research Council bursary, a University of Cape Town Research Scholarship, the Jules Kramer Grant and an Irma Stern Scholarship.