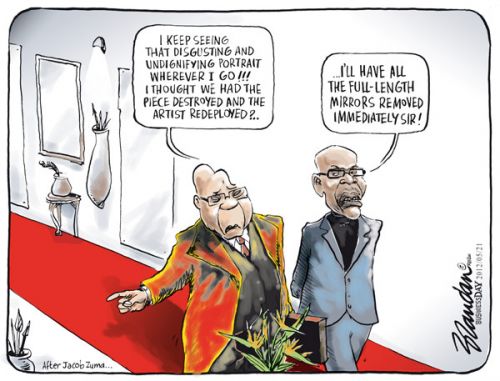 South Africa’s governing ANC says it will go to court after a gallery exhibited a painting with President Jacob Zuma’s genitals hanging out.Brett Murray’s painting by is an “abuse of freedom of artistic expression” said ANC spokesman Jackson Mthembu.
He said he had asked lawyers to get the Johannesburg gallery to remove the $14,000 (£9,000) painting, The Spear.

President Zuma, who has four wives, has sued local media companies 11 times for defamation.
The BBC’s Mohammed Ali in Cape Town says some have been settled, other dropped, while most are outstanding.The best-known case is a 2008 suit against one of the country’s most high-profile artists, Zapiro, after he depicted Mr Zuma about to rape a female figure representing justice - this is due to be heard in October.Mr Zuma was cleared of raping a family friend in 2006.

‘Satire’
Murray, who our correspondent says is known for his political and provocative work, has not commented on the ANC statement. Lara Koseff, spokeswoman of the Goodman Gallery, which is running Murray’s Hail to the Thief II exhibition, defended the painting as “a very satirical look at contemporary South African politics… of the disillusion of democracy within the country”.”Our lawyers have written back to them saying we will not remove the painting,” she told the AFP news agency.

The 1.85m-high Soviet-style, red black and yellow acrylic painting has been sold. Mr Mthembu said the ANC was committed to the freedom of the press and artistic expression but condemned the painting as “distasteful and vulgar”.

He demanded that the painting be removed from the gallery, its website and all promotional materials.
Among the other exhibits is an ANC poster with the phrases For Sale and Sold on it, which Mr Mthembu also condemned as “defamatory”.