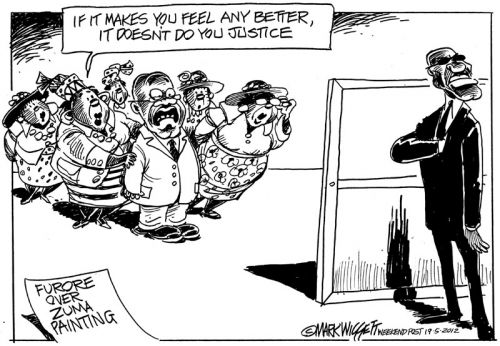 Brett Murray Nails It. No Wonder The Comrades Don’t Like Him

I hadn’t heard of artist Brett Murray before the ANC blew this wide open by threatening to use “their” courts to have the paintings taken down. The ANC wants to use their court system to force Murray to take a painting of what looks like President Jacob Zuma in a Lenin pose with his genitalia exposed, down. The painting of Zuma is called The Spear, and the exhibition is called Hail to the Thief II.

But it doesn’t end there, Murray really nails the dynamics of what’s going on in SA politics right now.
Also featured in the exhibition is the Amandla! freedom fist, turned upper-cut-to-the-jaw fist.

Ironically, the ANC is doing exactly this to Murray’s exhibition, by using its power as the territorial monopolist of the judiciary to force Murray to take The Spear down.
Jackson Mthembu, the ANC spokesperson, said in a statement that “We have this morning [Thursday] instructed our lawyers to approach our courts to compel [them] to remove the portrait from display as well as from their website and destroy all printed promotional material.”

Did you note his choice of words: “our courts”? The ANC think they own the courts. They do. That’s democracy.In other words, the freedom-fighting ANC has become the bullying public censor.
Then, he cuts right to the heart of democracy and the welfare state with the following work. Democracy is the exploitation of the few by the many. And the welfare state is using the state as expropriator to steal from the productive and give to the unproductive.

See more of Murray’s works on display, here. This is the kind of art needed in this country right now, to challenge the status quo of thievery under the guise of democracy and the welfare state. If business leaders and intellectuals can’t do it because they fear of the backlash that could come their way, it is left to authors and artists to do so.

The exhibition will show at the Goodman Gallery, Jan Smuts Avenue, until June 16.