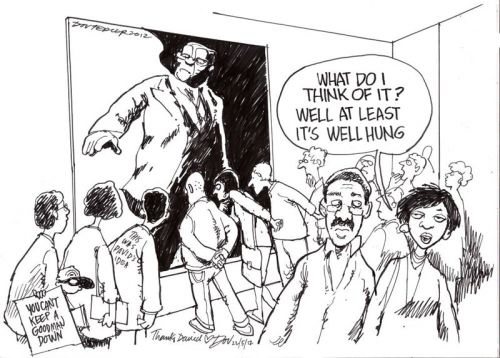 Brett Murray’s painting of President Jacob Zuma with his genitals exposed violated his rights, the presidency said on Friday.

“The presidency is shocked and disgusted at the grotesque painting by Brett Murray depicting President Jacob Zuma in an offensive manner,” spokesman Mac Maharaj said after the Goodman Gallery in Johannesburg refused to remove the painting.

“We are amazed at the crude and offensive manner in which this artist denigrates the person and the office of the President of the Republic of South Africa.”

Maharaj said Zuma was amongst the primary architects of the Constitution and Bill of Rights, and would defend those rights, but people had to realise they were not absolute.

“Nobody has a right to violate the dignity and rights of others while exercising their own,” he said.
Zuma was also a citizen with a constitutional right to dignity and “no human being deserves to be denigrated in this shocking manner”.

The presidency was concerned the painting “perpetuates a shocking new culture by some sections of the artistic world, of using vulgar methods of communicating about leading figures in the country, including especially the president”.

Maharaj said because of “intense hatred” of the new democratic administration or the ruling party, artists were failing to ensure disagreements were communicated in a cultured and civilised manner.

The presidency was also shocked that some media house were eager to publish the work.

The SA Council of Churches in Limpopo found the painting immoral and in bad taste, saying Zuma should be afforded dignity and respect because he is also a husband and father.

“Depicting the president in this unacceptable manner goes against our Christian morals and the founding provisions of our democracy and we find it to be in bad taste.”

The ANC earlier sent the gallery a letter from its lawyers demanding its removal and also wanted a picture of the painting, titled “The Spear”, removed from the City Press website. The newspaper refused, saying it would leave it to a court to decide. It has since been run on other websites, including Timeslive.
Gallery spokeswoman Lara Koseff said their lawyers had already responded to the ANC saying the painting would stay until the show was over.

“We feel it is censorship to take the image down,” said Koseff.

As visitors and delivery people snapped photographs of the 1.8m-long painting on their smartphones, and local and international media took footage, Koseff said although the opinions of artists were not the gallery’s, it was always interested in work that created dialogue.

Murray’s work includes a set of gold knuckledusters with the word “viva” inscribed on them, a crest with the map of Africa and word “mine” in the motto scroll, a large primate mating with a smaller one titled “The Party and the People” and an image with the words “predator elite”, from a speech by Congress of SA Trade Unions secretary general Zwelinzima Vavi when he spoke out against corruption.

However, Cosatu found the painting demeaning. “This picture is offensive and disrespectful not only to an individual, but to the democratically elected President of South Africa and therefore to the whole country and the people of South Africa,” Cosatu said.

One of those viewing the exhibition, Bryan Maritz, said he had come to see the work as a fan of political satire.

He described the Zuma painting as “striking”, but preferred Murray’s other pieces finding them “very hard hitting”.

A guard with a bullet-proof vest had been posted at the gallery door as a precaution.

Koseff said Zuma had not been to see the work, but Arts and Culture Minister Paul Mashatile had called to express concern, so a meeting was planned with him and the gallery.

The National Education Health and Allied Workers Union said it had found the painting, and media coverage of it, dehumanising and embarrassing for Zuma and his family. - Sapa