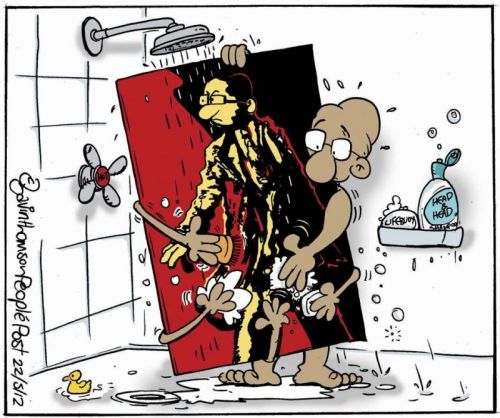 Our news team’s cameras were rolling as two men, one of them believed to be a university professor, defaced the controversial painting of President .

The Presidency says it is “shocked and disgusted” at the painting by Brett Murray depicting President Jacob Zuma in an offensive manner.

The painting on display at the Goodman gallery has sparked national debate on the issue of freedom of expression and the right to dignity.

“We are amazed at the crude and offensive manner in which this artist denigrates the person and the office of the President of the Republic of South Africa,” Zuma’s spokesperson Mac Maharaj said on Friday.

Maharaj said they were also concerned that the painting perpetuated a shocking new culture by some sections of the artistic world, of using vulgar methods of communicating about leading figures in the country, in particular the President.

Intense hatred of the new democratic administration or the ruling party should not translate into distorting South Africa’s value system of emphasising respect and of ensuring that disagreements are expressed in a cultured and civilised manner, which these artists are failing to do, added Maharaj.
The high office also condemned some media houses, saying it was shocking that they found this sort of work worth displaying on their websites and were eager to publish it repeatedly.