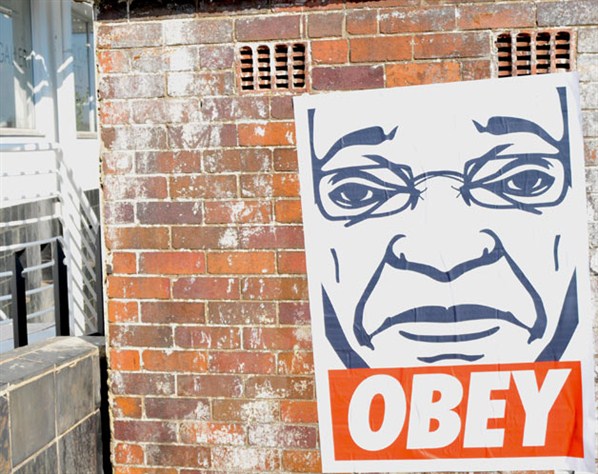 ‘I regret taking down The Spear’

Ferial Haffajee, the editor-in-chief of City Press, says she regrets taking down The Spear from the newspaper’s website in May.
On Wednesday, Haffajee revisited her experiences of the controversy surrounding the paper’s republication of Brett Murray’s portrait of President Jacob Zuma with his genitals exposed.

The experience had turned her into a “fundamentalist” for press freedom, she said, and she would sooner resign than take down the image of the painting again.
Haffajee was speaking at UCT, where she delivered the annual TB Davie Memorial Lecture on academic freedom.

“The outcome of all of this is that I am a changed person. I would not have taken down [The Spear] knowing what I do now. That power of love, of standing down, of reconciling to a greater good is withered in my eyes and has been made to wither by a (failing) leadership and by men and women who are shadows of the people who led us into the democratic era,” she said.

Regarding the failure of SA’s political leadership and the corruption that filtered into all levels of government, she praised the resurgence of the country’s civil society.

Equal Education, the Social Justice Coalition and the Right2Know Campaign were highlighted as stalwarts in this regard.

“[In terms of corruption] the arms deal is small compared to what we now have to go through every day,” she said, adding that the cost to development precipitated by corruption was one of the biggest threats to “freedom” in SA.

She also turned her scorn on the Film and Publication Board (which had classified The Spear as not being suitable for children under the age of 16) for having been “morphed into a political hand maiden”.

“The classification was a predetermined outcome which had almost nothing to do with protecting children, it was done to satisfy political masters,” she said.

But Haffajee concluded that her experiences as editor of City Press had taught her a more positive thing about the country: “We take our democracy extremely seriously, as we should. I know that we will protect it and its continuity.”