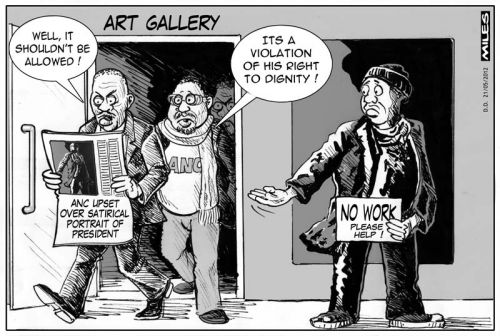 South Africa’s ruling party has threatened legal action against an art gallery after it displayed a number of satirical artworks, including one depicting President Jacob Zuma with his penis exposed, Sky News reports.

The African National Congress (ANC), which has governed the country since 1994, wants the Goodman Gallery in Johannesburg to take down two of the paintings.

One, called The Spear, is a facsimile of a famous poster of Vladimir Lenin with Zuma mimicking the Communist leader’s heroic stance, however the South African president is depicted with his genitals out.

The other shows the ANC logo with a ‘For Sale’ sign superimposed across it.

The works are part of a collection called ‘Hail to the Thief’, which comes as a growing public perception that official corruption is on the rise in South Africa.

Other works include a Soviet-style poster reading: ‘The Kleptocrats’ and ‘We demand Chivas, BMW’s and Bribes’. “It’s making a mockery of the highest office,” ANC spokesman Jackson Mthembu said. He added that the artist was within his rights to express himself but said The Spear was “vulgar”. Zuma, who has been married six times and fathered 21 children, faces a battle for re-election as the party leader at the end of this year. The Spear, by well-known anti-apartheid artist Brett Murray, has already been sold for £10,300 to a German citizen. daily times monitor