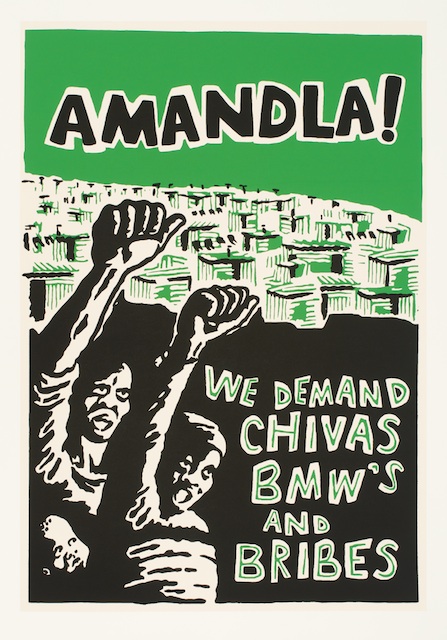 The row over The Spear painting by Cape Town Artist Brett Murray may have divided public opinion, but artists canvassed yesterday were all in agreement that he had the artistic licence to express himself.

The painting titled “The Spear” depicting President Jacob Zuma with his genitals exposed, has sparked fury from the president and the ANC who have taken the battle to court to have to the Goodman Gallery take down the portrait and City Press remove images from its website.

“The Spear” is part of Murray’s “Hail to the Thief II” exhibition and imitates the pose of Russian revolutionary, Vladimir Lenin in a Soviet era propaganda poster.

Cape Town artist Vuyile Voyiya said the portrait addressed a number of well-known issues and he did not think the portrait was degrading or racist.

“Artists have an artistic licence to critique and to open a debate which people take further. We open that space through critique. Obviously Zuma has his own tendencies which are not to be celebrated and sexual issues are a source of controversy because he is depicted with his genitals exposed,” he said.

Voyiya added: “Satire is satire, no matter who expresses it. It could be viewed as degrading because he is the president but if it was someone who did not have his kind of stature then it wouldn’t be a big deal. I don’t see it as degrading, as an artist I treasure our instrument of freedom of expression.”

Voyiya hoped the portrait would open the debate into struggle heroes who are living in a manner “that does not cover them with glory”.

“The issue of racism hasn’t been resolved yet and I am thinking what the reaction would’ve been if a black artist did this,” he said.

Andrew Lamprecht, a lecturer at UCT’s Michaelis School of Fine Art commented in his private capacity : “His work is controversial and it’s intended to be disrespectful. A lot of commentators are saying it portrays Zuma’s genitals but they are missing the point between a rhetorical representation and an actual portrait. We aren’t actually seeing the president’s genitals, he didn’t pose for the portrait.”

“If you look at it in the context of it being a criticism of an organ of state, we will see that it is political commentary which is protected by freedom of speech, not a personal attack on Zuma,” Lamprecht said.

Arts Times editor, Gabriel Clarke-Brown said the painting was a true test of how the ANC practises the Constitution.

“They might say that they helped bring the Constitution about but freedom of expression belongs to all South Africans. Brett is a great artist and this will show what the ANC talks about and what they practise. He took the imagery of Lenin, he wasn’t attacking Zuma in his personal capacity but him as a leader. It’s no secret that Zuma enjoys his customs and his free will and all Brett did was take public knowledge and put it on a painting,” he said.

Commenting on the court action, Clarke-Brown said: “It recalls the days of apartheid and censorship where the ruling party would not tolerate any from of critics. The Constitution is there to protect freedom of speech, both good and bad.”

Murray graduated with his Masters in Fine Art with distinction from the University of Cape Town in 1989. His thesis was titled “A Group of Satirical Sculptures Examining Social and Political Paradoxes in the South African Context”.

His work is widely exhibited in South Africa and abroad while he also established the sculpture department at the University of Stellenbosch in the early 1990s.