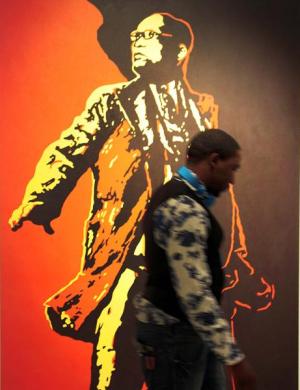 ‘Get over it’, Tambo’s daughter tells Zuma

The daughter of the late ANC veteran Oliver Tambo showed little sympathy for President Jacob Zuma’s complaint about a portrait of himself exposing his genitals.

The Star reported today that Tselane Tambo posted the following message on a social networking site: “So the Pres JZ has had his portrait painted and he doesn’t like it.

“Do the poor enjoy poverty? Do the unemployed enjoy hopelessness? Do those who can’t get housing enjoy homelessness? He must get over it. No one is having a good time. He should inspire the reverence he craves. This portrait is what he inspired. Shame neh!”

The 1.85m-high painting titled The Spear is part of Brett Murray’s Hail to the Thief II exhibition at the Goodman Gallery in Johannesburg.

The portrait has sparked debate about freedom of expression and the right to dignity and privacy.

The ANC was set to argue in court tomorrow that the painting should be removed because it violated Zuma’s right to dignity and made a mockery of his office.