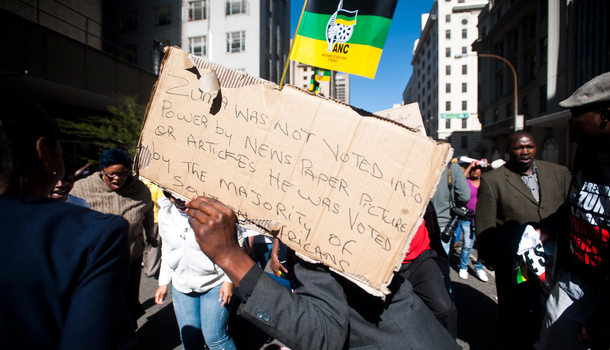 President Zuma’s right to privacy will be pitted against ‘Spear’ artist Brett Murray’s right to freedom of expression as the matter goes to court.

The stage is set for a ground-breaking legal battle at the South Gauteng High Court this week as President Zuma’s right to dignity is weighed against the right to freedom of expression.

The president and the ANC is due to lock horns with the Goodman Gallery and City Press on Tuesday over the controversial exhibition and resultant publishing of Brett Murray’s contentious artwork The Spear.

Murray’s painting depicts Zuma with his genitals exposed, and forms part of his Hail to the Thief II exhibition.

The ruling party and Zuma will seek an urgent interdict against the gallery and the paper, ordering the image to be removed from the exhibition and taken off the newspaper’s website, arguing that it violates the president’s right to privacy and dignity.

Both the gallery and the newspaper stand by their decision to exhibit the portrait, claiming they are protected by their constitutional right to freedom of expression.

But legal opinion on the matter is divided. Several legal minds told the Mail & Guardian on Sunday the case warranted the judicial scrutiny it is being afforded.

‘Complex’
Advocate Johan Gaum said the elements constituting defamation of character or libel are “clearly present”, but it would be “complex” for the court to decide if these laws were infringed upon.

Advocate Norman Arendse said the case was “almost unprecedented” because it weighed sections of South African Constitution against one another.

“Both parties are competing for and against rights enshrined in our Constitution.

Honourable member: The ANC gets cocky

Zuma’s family fumes at The Spear

On the one hand you have freedom of expression and the press; on the other, a person’s right to privacy and dignity,” Arendse said.

In their filing affidavit, Zuma and the ruling party noted in their argument that the president was represented in an “undignified manner” and that Murray had “overstepped” his right to freedom of expression.

But Arendse said that while the president had a right to dignity, his personal actions could be called into question in court.

“In as much as dignity must be respected, he has also had a private life littered with scandals and this will most certainly come under scrutiny when the matter is tested,” Arendse added.

Nonetheless, Rudi Krause of BDK attorneys said even though Zuma is a public person whose actions are of public interest, he is still entitled to a private life.

“The holding of public office does not preclude anyone from having their dignity infringed upon or having said dignity protected by the law. Any normal South African can exercise that legal protection regardless of them holding public office,” Krause said.

The case is due to be heard at 10am on Tuesday, with Advocate Muzi Sikhakane leading the charge for Zuma and the ANC.

This is not the first time Zuma has taken an artist to court over his representation in their work.

Renowned political caricaturist Zapiro is currently being sued by the president for R5-million after he depicted Zuma about to rape a blindfolded Lady Justice, unbuckling his belt as she was held down by his political partners in the tripartite alliance.

The matter is still before court after Zuma first laid the charge in 2009.

Besides perplexing legal minds, the painting has also divided public opinion with cases argued for and against the artwork.

Literary critic Karabo Kgoleng said that while she didn’t find the artwork racist, per se, she felt the painting raised some serious questions.

“It’s a problem on how we frame this debate. We have artistic expression versus the problem of explaining this to our young children in an environment of sexual violence and high instances of rape in South Africa,” Kgoleng told the M&G.

“Blacks feel humiliated and spat on by their white counterparts in situations like this. We all need to learn that as creative people we have a responsibility to see that our work contributes to building a new South Africa, free from prejudice,” Serote said.