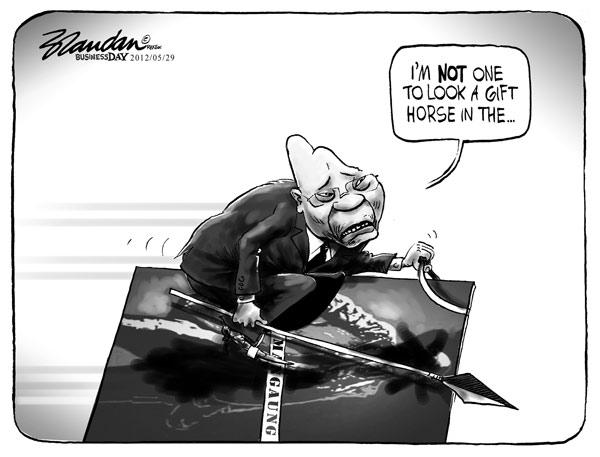 OFFENDED by the portrait of their dad with his genitals hanging out, President Jacob Zuma’s daughters yesterday broke their silence and described the image as “the straw that broke the camels back …”

We speak out now because we feel that this character assassination of our father is undermining his dignity and the South African ideals so many sacrificed so much for
In a strongly worded statement since the row over TheSpear painting erupted this week, Zuma’s daughters - while understanding that their father is a public figure - say the image could not be described as political but “infringes on his right as a human being instead”.

The daughters, including Gugulethu, Duduzile, Phumzile, Thuthu and Msholozi, writing on behalf of their family, say the painting seeks to take away their father’s “dignity and destroy his true character and stature as a man, a father, a leader of the ANC and South African society at large”.

“Only animals walk around naked, not people, and this depiction clearly indicates the artist [Brett Murray] and his supporters see not only the President, but black people as such.

“The painting is … the straw that broke the camel’s back in this notion that a black man who is associated with African culture and traditions and who does not fit the ‘perfect’ mould of western values and beliefs is less human than the next person.”

Sources close to Zuma this week told Sunday World “the president was deeply hurt by the image, even though he did not want to get personally involved”.

Murray’s painting is on public display at Goodman Gallery in Joburg and the ANC has demanded that it be taken down - or gallery owner Liza Essers will face a court interdict.

Koseff said their attorneys had informed the ANC the painting would stay. The gallery stuck by its artists during apartheid and still supported them, she said.

Koseff said the president had not been in to see the work, but Arts and Culture Minister Paul Mashatile had called to express concern. As pressure mounted, the gallery said it had agreed to meet Mashatile to discuss the issue.

Koseff said when she was walking through the gallery before the exhibition opened, she thought of Chinese artist Ai Weiwei, who had been hounded for portraying the Chinese government in a negative light.

Zuma’s daughters, - some of whom are actors and arts workers - disagree: “It is our view that the issue is not one of freedom of speech or artistic expression; it is about the fact that the painter does not see our father as a human being and therefore does not see it appropriate to depict him as one.

“… he is depicted in a disrespectful savage-like manner, something that can only be justified through a Eurocentric and Negrophobic lens.

“The painter would never depict his father in that manner, nor would he depict any father or man in that manner, but an African like Jacob Zuma is depicted in that way because he does not view them (sic) as his equal,” the daughters say.

They accuse Murray of not caring about the South Africa that the likes of their father fought for, that’s why “he continues to further entrench stereotypes and racism through this artwork”.

“To depict a man, let alone a head of state, in this manner shows that he has no respect for him or anything he represents. Those who are his defenders as well as those who are conspicuously silent on the matter are just as guilty.

“We speak out now because we feel that this character assassination of our father is undermining his dignity and the South African ideals so many sacrificed so much for.”

SA Democratic Teachers Union Sadtu entered the fray last night, saying it was joining the ANC and Cosatu in the call to have Zuma’s painting removed from “the Goodman Gallery and on the Internet with immediate effect, as we see no artistic expression in the painting but an obscene, distasteful and blatant insult to the president of South Africa, president of the ANC and family man”.

The union said “the painting has done untold damage to the president and the country’s image and dignity. Not only are President Zuma, the ANC and his family feeling humiliated, the majority of South Africans experience the same.”