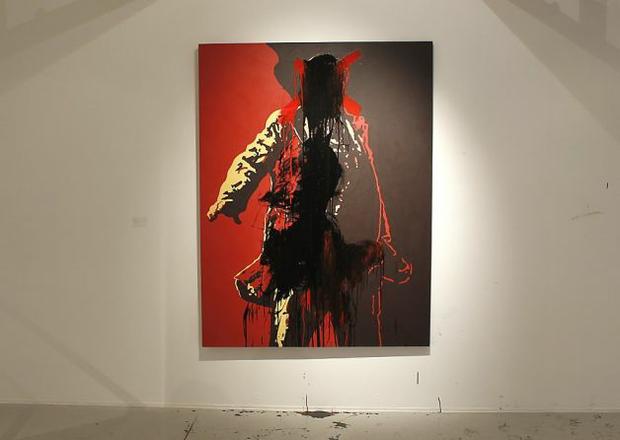 The controversial portrait of South African President Jacob Zuma painted by Brett Murray stands defaced at the Goodman Gallery in Johannesburg, South Africa, Tuesday May 22, 2012. Footage shown on a national news station showed a man in a suit painting a red X over the president’s genital area and then his face. Next a man in a hoodie rubbed black paint over the president’s face and down the painting with his hands.

A South African art gallery that displayed a controversial painting showing the country’s president with his genitals exposed announced Tuesday it was closing its doors temporarily because of threats.

The decision came after vandals defaced the artwork earlier in the day.

Lara Koseff, spokeswoman for the Goodman Gallery, said there had been numerous threats made against the gallery after its display of “The Spear,” by Cape Town artist Brett Murray. The painting has divided South Africa and ignited a debate on artistic freedom.

Koseff said the gallery closed its doors because visitors and staff were at risk of violence. Two men smeared paint on the artwork, which depicted President Jacob Zuma posed like Soviet leader Vladimir Lenin with his pants unzipped and genitals exposed. The men were arrested and charged with malicious damage.

Before Tuesday, Zuma and the ruling African National Congress had sued the gallery to remove the painting and the newspaper City Press to make it remove a picture of the work from its website.