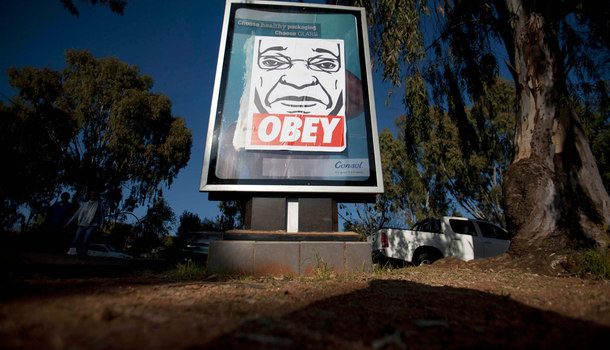 Art world in a tizz about The Spear

Zakes Mda: ‘ Those who resort to violence have lost the debate.’

The vandalising of The Spear painting by artist Brett Murray has sparked heated interest and diverse reaction in the arts community.

When asked to react to the damage done to the painting depicting President Jacob Zuma in a classic Lenin pose, but with exposed genitalia, international author Zakes Mda said: “Those who resort to violence, vandalism and destruction of private property have lost the debate.”

All he would divulge was that he had been asked by the Goodman Gallery whether they should seriously consider removing the painting due to the heated controversy.

“I did suggest they should take it down,” he said.

Cartoonist Nanda Soobben was outraged at the news of the artwork being vandalised. “It’s a disgrace. Now the whole world is going to witness the Zumafication of this country!”

“This is part of the context of 300 years of dispossession and colonialism which stripped people of their humanity and dignity. Tens of thousands of men were physically stripped naked when imprisoned for pass laws. Our hoary past has a lot to do with the psychological and emotional response to this piece of art and hence has garnered support against the artist and his work as a continuation of the fight for liberation.”

On Facebook people are signing a petition created by outspoken painter and illustrator Lizza Littlewort in response to the artwork’s vandalism.

“This petition is an act of tolerance towards two artists who have defused a situation of toxic racial polarisation and potential violence,” said Littlewort.

She added that in its new form, the work was making a statement about the rights of the individual to censor and was forcing the viewer to ask difficult questions about art, Jacob Zuma and life.

As one commentator on Facebook pointed out: “The painting has been ‘remixed’, brought up-to-date and given a post-modern edge. The original pop-art aesthetic of the work has been juxtaposed with an abstract-expressionist feel evoking the works of Fluxus action-painting.”

Creative director Honey Makwakwa questioned whether the artist had not benefited from this act. “When Marc Jacob’s store was defaced by a rebel artist, he photographed the mess and printed it on T-shirts that now retail for $350 (R2 884)!

“My thinking is that this controversy could only add value to the work, that this work could inspire; that must mean something, or doesn’t it?”

Savyra Meyer, illustrator and visual artist, said: “Defacing this work is another attempt by others attempting to gain publicity for their cause, whether it’s the brand of paint or some political party… who knows?

“There will always be those who make the genuine courageous move, the true originals, and those who insist on riding on their coat-tails with their own agendas firmly in place.

“If Brett Murray didn’t have the struggle credentials he did, then it could be seen as a stunt by an artist who knows how to increase his worth overnight by being controversial.

“But I believe artists are prophets and need to speak truth to power because few others will, even if they do have the arena artists have.

“Much as I didn’t like the painting because I believe like an African that everyone is still a person with a family, regardless of what they’ve done, and I cringe for Mr Zuma as a person, Brett Murray has shown a lot of courage.

“There is a desperation that the people of this country are not being heard and maybe this is what it takes to wake the president up.”