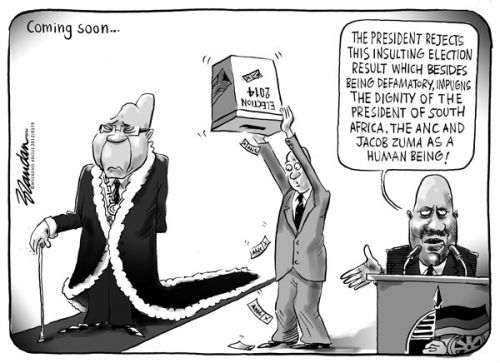 Brett Murray’s painting “The Spear”, 2011, depicting South Africa’s president Jacob Zuma with his genitals exposed, was vandalised by protesters this wee.k A leading South African gallery has temporarily closed amid mounting controversy over a satirical painting of the country’s president. Jacob Zuma, the South African president and leader of the African National Congress (ANC) political party filed a legal suit against the Goodman Gallery, Johannesburg, this month for displaying a painting by Brett Murray, The Spear, 2011. The painting depicts Zuma in a mock-heroic pose with exposed genitalia. Zuma and the ANC contend that the work violates his constitutional right to dignity. The ANC also says that work refers to stereotypes around African male sexuality. In his application to have the painting removed, Zuma also demanded that the gallery’s promotional material be destroyed.

The Goodman Gallery released a statement in which it says that after “numerous threats of intimidation” it will be temporarily closed. “We feel that the Goodman Gallery, its staff as well the public visitors are at risk.”  The Goodman Gallery refused to remove the work. Liza Essers, the gallery’s director, said that is determined to fight for freedom of expression and artistic creativity. The work is part of a show “Hail to the Thief II” and is reported to have been sold before the opening night for R136,000 ($16,200).  An initial hearing to decide if the artist’s right to freedom of expression outweighs Zuma’s right to privacy, was held at High Court in Johannesburg on 22 May, however no ruling was made and a further hearing was scheduled for 24 May.

The Johannesburg-based City Press newspaper, which had also received a court order, also refused to remove an image of the painting that it had posted on its website.   Two men were arrested at the gallery on 22 May for defacing the painting with black and red paint. They have been charged with malicious damages to property and the painting has been moved to a safe location. The attack on the work and subsequent claims that the younger suspect was assaulted by the gallery’s security guards, has heightened the controversy surrounding Murray’s painting. “The extent of the rage has astonished and upset me very much,” Essers said in a statement released after the incident. “I never imagined that this debate would transform into harmful, physical action.”  A spokesman for the Nazareth Baptist Church told the UK’s Guardian newspaper that “this [painting] is an attack on the culture of the majority, the black people of Africa”.

Karel Nel, a professor at the University at the Witwatersrand in Johannesburg, was one of the experts who supplied statements for the gallery’s legal defence. “The works in this exhibition extend the debate on power, sex and patriarchy in our society,” says Nel. “As an artist, Murray could be understood in terms of the role of the court jester, who would traditionally amuse the king, nobleman and courtiers with stories pertinent to their lives within the circumscribed power of the court.”   This is not the first time that Zuma has taken offence at a work of art.

The South African cartoonist, Jonathan Shapiro (known as Zapiro) has also been sued by the president over a drawing of him about to rape “Lady Justice”. In 2006, Zuma was acquitted of raping a family friend.   The gallery has displayed works by politically-engaged artists throughout the Apartheid era: “We show controversial views in a neutral space. I respect Zuma’s opinion of the art work as much as any other, but the issue is the protection of freedom of expression,” Essers says. The Art Newspaper also submitted a statement for the gallery’s defence, which argued that it is one of the leading galleries in the African continent and “should be free to continue to act in support of its artists’ practice”.

UPDATE: After reaching a settlement, the African National Congress party has dropped its action to ban the painting of Jacob Zuma and the gallery has taken down the picture.